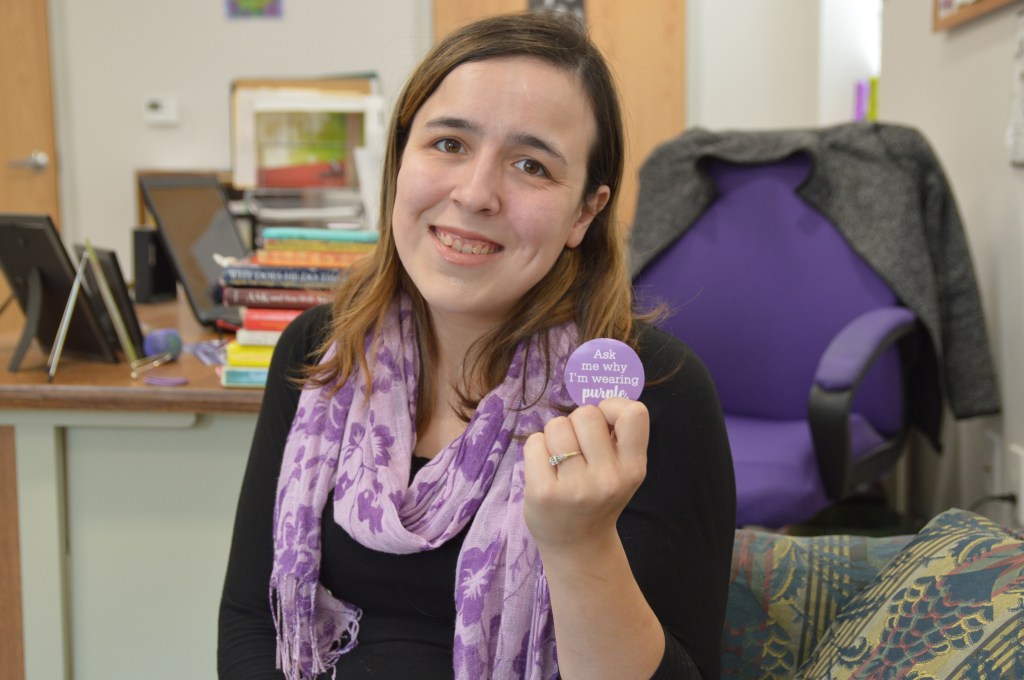 Andrea Lewis, a licensed clinical social worker who runs the local GreenHouse17 branch, holds up a sticker many will wear for Purple Thursday on Oct. 24, in observance of National Domestic Violence Awareness Month. Those who want to participate and support survivors are asked to wear the color purple and post pictures to social media with the hashtags #EndDV, #DVAM, #SupportSurvivors or #PurpleThursday.

The only thing that’s predictable about her job is the fact that it’s unpredictable, says Andrea Lewis with GreenHouse17. “But that’s the nature of crisis work,” she says.

She’s a licensed clinical social worker with the non-profit agency that works with domestic violence survivors in a multitude of ways.

Lewis holds support groups, helps survivors with education, finances, housing needs and safety plans, and tries to keep the community in touch with the fact that domestic violence — what she refers to as “DV” — occurs every day. 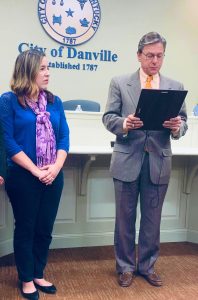 Bobbie Curd
Andrea Lewis receives a proclamation recently from the Danville City Commission in honor of National Domestic Violence Awareness Month, which is observed in October.

“With October being National Domestic Violence Awareness Month, we talk about how it affects the people in our communities. And I really feel like our goal is to make sure people know that it does go on.”

Lewis strives to educate others that DV is not a one-size-fits-all issue. It may look different for different people, and it may not be obvious.

“It’s something that often times occurs in isolation … because that’s one of the ways perpetrators can continue to exercise that power and control over their victims.”

She normally tells people her office hours are 8 a.m.-4 p.m., but that doesn’t mean they will always find her behind her desk. The local office serves Boyle, Mercer and Garrard counties, which means Lewis is often in those Family Court systems. She checks the DV docket to assess who is in need of her help, and she shows up to offer support.

Sometimes, when Lewis meets them in court, it may be their first interaction. “Sometimes they request I sit with them. I can’t speak for them because I’m not a lawyer, but I can help make it less scary and put an additional barrier between them and their abuser. I leave that up to them.”

She helps victims with filing protective orders and other court petitions, or connects them with legal and other resources. “Resource connection is a big part of what I do,” she says, and involves regular meetings with other human services agencies in the three counties.

GreenHouse17 also has its own steering committee here locally now; the agency’s headquarters are in Lexington. “It’s a good mix of community people, averaging an attendance of about 10, so that’s up and running.”

And this week, Purple Thursday will be observed. “A bunch of us are being intentional about it, to get the community involved. We hope people will tag themselves in purple on social media with different hashtags for awareness …” like #EndDV, #DVAM, #SupportSurvivors or #PurpleThursday. It’s just another way to get the word out, she says.

“And to remind people that it’s something others deal with every single day. It’s a way to show support to the survivors.”

Support is a huge part of helping a domestic violence victim, but Lewis cautions: “But don’t be pushy.” She says one of the most common misconceptions is that if he or she is hurting you, “why don’t you just up and leave. But it’s not that simple. That’s something I hope people take away from this, too, realizing that there could be any number of reasons why a survivor may decide not to leave.”

It’s also important to give victims the power to make their own decisions about reaching out for help; they may be scared, and it may be dangerous for them to do that — “Oftentimes, there’s a lot at stake there.” She says statistically speaking, leaving is the most dangerous time for a survivor, which is why it involves careful planning and consideration, and thinking about all the factors involved when developing a safety plan.

And all the other planning involved — she says 98% of DV relationships involve some sort of financial exploitation.

“And people tend to be really well-intentioned, as far as wanting to help survivors, but one thing I think is really important to consider is telling them what to do can sometimes come across as no different from what their perpetrator does.”

For anyone who wants to reach out and help someone they think, or know, is a DV victim, Lewis said you can offer support in the form of resources, hopefully reaching someone who is trained in the area of how to help them.

She got involved in this type of work because of her own personal journey as a survivor. But Lewis isn’t anxious to take the spotlight, as far as her own experience is concerned. She keeps the focus on the survivors she works with.

“Although I will say, my personal opinion is that people who come into this line of work and have that personal experience about what it’s like to be a DV survivor, we are able to engage with clients — there’s that level of understanding that really helps with the connection, it’s just different. … That’s not to say that if someone doesn’t have that personal experience — there’s a gift in that, too. Most generally I don’t bring it up with them unless they ask. I may tell them, but I gear it back to them.”

Lewis has been working more with Centre College, trying to engage with the student body more and having more of a presence on campus; domestic violence doesn’t mean you have to be living with someone to be a victim.

And GreenHouse17 products — cultivated at the Lexington location in their agricultural program — are now sold at Maple Tree Gallery, with proceeds going to support the cause. There’s a shelter there, too, for survivors — something Lewis wishes people had access to in his community. “Danville absolutely needs one. Lexington is an hour away, but we’ve recently talked about looking at some transitional housing units locally in the next few years.”

It can be a draining job, depending on what’s going on, but Lewis says it’s simple: “For me, it’s seeing the people I’m working with succeed in whatever way that might look like for them. Getting their power back, finding their voice. For me, that’s when I know — that is my sign that this is why I’m here in the work, why I’m doing what I’m doing, when I see them thriving. Those are the moments I know this is what I’m meant to do.”