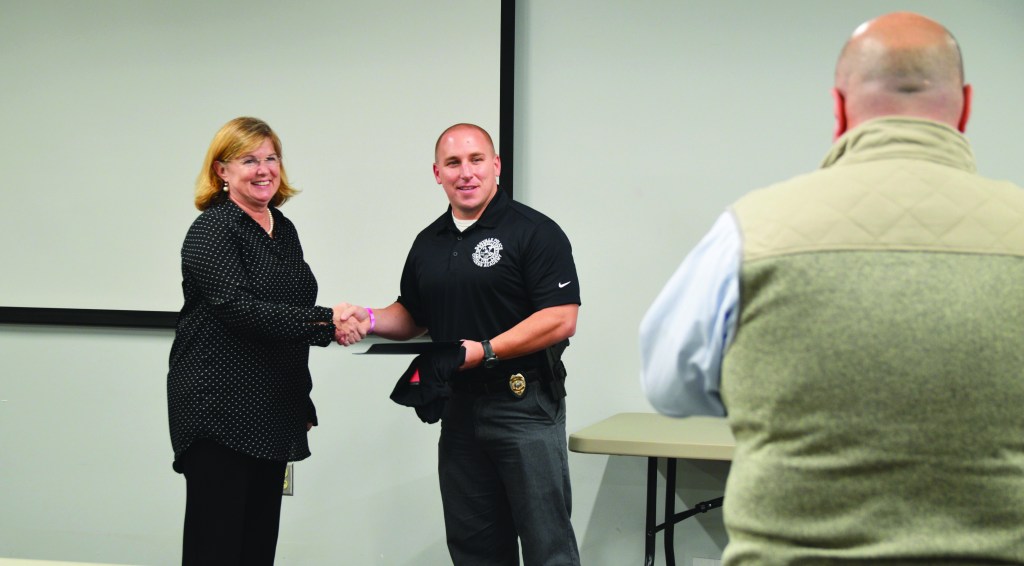 Patti Chidester gets a photograph with Asst. Chief Glenn Doan as she accepts her diploma for completing the Danville Police Department's Citizens Academy.

Patti Chidester said one part of the curriculum from Danville Police Department’s Citizens Academy made her cry. It wasn’t the picture of deceased bodies from a local murder during a case study overview, using a taser on someone or even when she had to shoot Asst. Chief Glenn Doan.

It was when she witnessed how police officers can be treated by some in the public.

Tuesday evening, eight graduates gathered in the meeting room of the police department to accept their certificates of completion for taking the 10-week Citizens Academy course, an intensive, behind-the-scenes look at how Danville Police operates.

Doan, who coordinated the class, said the group did everything from Red Man training — where he suited up and allowed them to use a baton in a simulated use of force scenario — to deadly force encounters, using the same gun police do. “But it shoots a pistol round of soap that’s a projectile,” he said.

“We’ve got some good shooters — I ended up with some pretty good bruises,” said Doan, who would portray “the bad guy” in the scenarios. They made mock traffic stops, sometimes encountering difficult people, and even got to shoot a live taser for a demonstration.

But Chidester, who took the class with husband Gary, was most affected by watching footage from body camera videos officers wear.

“We hear about ‘bad police officers,’ but every one we’ve ever met here in Danville is not like that, at all,” Gary Chidester said. So, the couple decided they needed to learn more about what officers go through, and it was an awakening.

“What happened in other cities, that happens in Cincinnati, Detroit, Cleveland. But then they showed local people — three actual videos from real life scenarios,” Gary Chidester said. “And I was like, this is happening in Danville. I couldn’t believe it.”

Patti Chidester said, “It made me cry. Really did.” It upset her because “they just want to serve and protect us.”

And that’s what Doan wants — to create more of an understanding. He says the class is “excellent for the relationship between the community and our department because they got to meet officers of all different experience levels.”

The class was able to hear from a range of detectives, firearms instructors and others who specialize in things like building clearance for active shooter scenarios. Younger officers told the class about traffic stops and DUIs. It was important to Doan that the citizens see a wide variety of officers, and that the department was well-represented.

“Yean, we do a difficult job — can be very dangerous, but we’re just the same as you. I think everybody connected to the officers who helped teach different portions of it, and our people enjoyed interacting with them, too,” he said.

As far as what part of the class surprised citizens the most, Doan said, “The first day was some of the more eye-opening things for the class, I think, when we explained how many officers we actually have, what it takes to become one, the retention and recruitment issues … And when we went through our call volume, just as far as how busy we are, things people don’t get to see on a daily basis.”

Gary Chidester said he was able to use what he learned almost immediately. “It really hit me about the thought process, how every action can affect their thought process on how to handle a situation …” He explained he was walking early one morning, around 5:30, after they had class on how actions can escalate a situation.

Walking past Centre College, two officers had stopped to talk to a man. As Gary Chidester approached, “I’m usually happy-go-lucky, talk to everyone,” but he second-guessed that instinct and instead crossed the street to stay out of the officers’ way, let them do their job.

“I’d never thought about that, how they don’t know who you are if they’re with one person and you walk up on them … It’s eye opening.”

Doan said policing is a popular topic for many reasons. “You see the shows and the news stories. People are very interested in the field.”

This class is just another way citizens can gain more of an understanding, he said.

The class participants actually got to try their hand at lifting fingerprints off a surface, which Doan says is “kind of difficult. You don’t just pull fingerprints out of thin air. We made some and let them dust cups and things like that.”

They ventured out to speak to Asst. Boyle County Attorney Patrick Barsotti, and took a tour of the courthouse as he “took them through the court system,” Doan said. They went to the detention center where Jailer Brian Wofford and Chief Deputy Chad Holderman led them on a tour.

He said it was important that the class get to experience different parts of the criminal justice system.

The Citizens Academy hadn’t been offered for a while, but Doan wanted to get it going again. “Me and Chief (Tony) Gray had been talking about it, and he gave me the opportunity to kind of take charge and run with it. I had a lot of help along the way, from other officers and support from other commanders. It’s definitely been a positive experience.”

Doan told the class Tuesday evening he also got help from Sandra Curlis, the department’s administrative assistant. “She helped with so many things … there’s a lot I wouldn’t have gotten done on my own if not for her. And that goes for Chief Gray, as well.”

They are tentatively planning a more condensed training to offer in late spring or early summer, possibly a five- or six-week long class, for those who can’t make the 10-week commitment.