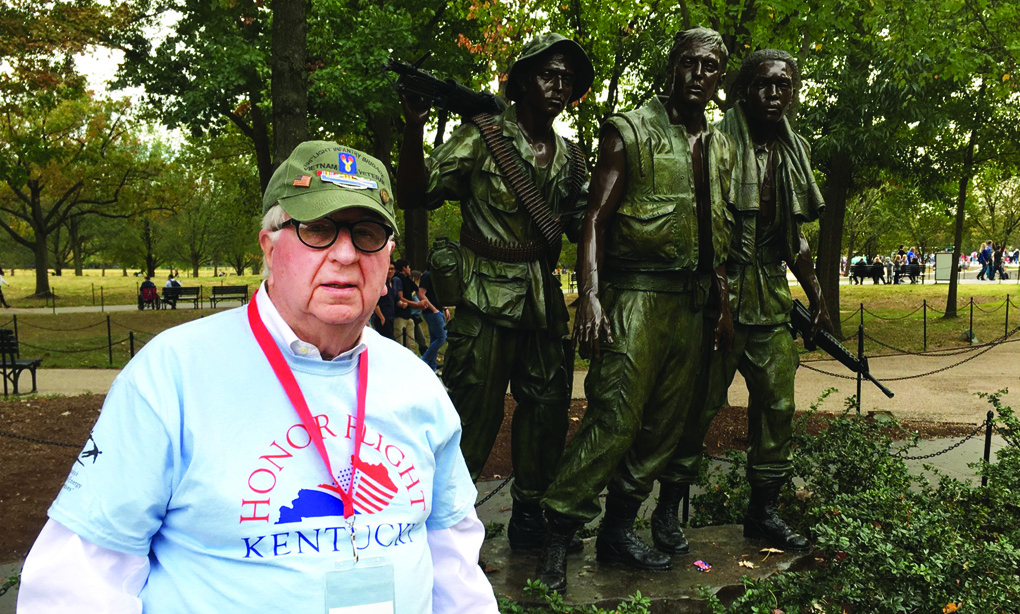 John Caywood stands in front of "The Three Servicemen," a statue that is part of the Vietnam Veterans Memorial in Washington, D.C. (Photo submitted)

‘Proud to be an American’

Boyle County Magistrate John Caywood was one of 76 U.S. military veterans who were given the gift of thanks last weekend.

Caywood got to take an “honor flight” from Bluegrass Airport in Lexington to Washington, D.C., where the veterans were given a tour of the war memorials in the nation’s capital.

“It’s an incredible experience to see how much veterans mean to this country, and how much pride our country takes in us,” Caywood said.

As they were escorted to their plane, there were people lining their path, waving American flags. The plane’s interior was decorated all down the aisle with red, white and blue, Caywood said.

Every veteran on the flight was accompanied by a “guardian,” someone who took an online training course on how to professionally accompany and assist the veteran during the trip. Caywood’s guardian was his own son, John Jr.; he said his son did an excellent job.

Caywood said he was impressed by how many people were at all the memorials the group visited in Washington.

“They were from everywhere throughout the world, young, middle-aged, white-haired …” he said. 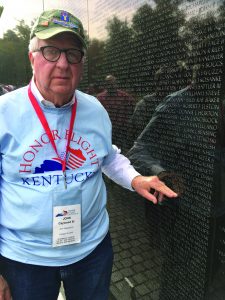 John Caywood points to the name of a man he served with in Vietnam on the Vietnam Memorial Wall in Washington, D.C. The names of the approximately 58,000 Americans who were killed or listed as missing in action in the Vietnam are inscribed on the wall. (Photo submitted)

Another part of the trip that held enormous value for Caywood was “mail call,” when the veterans were given letters from home — some from children, some from students, some from politicians … one of Caywood’s letters came from a fellow member of the Boyle County Fiscal Court and veteran Judge-Executive Howard Hunt, a retired Air Force brigadier general.

“I cannot tell you how much that note meant to me as I read it and I appreciate Howard taking the time to write it,” Caywood said. “There is a code in the service of brothers in arms that no civilians will ever, ever understand. But you know it’s there — everybody has everybody’s back.”

Honor Flight Kentucky organized the Oct. 19 event. HFK is “one of 130-plus non-profit charitable chapters located in 42 states that comprise the Honor Flight Network,” according to its website. “Our mission is to fly World War II, Korean War and Vietnam War veterans to Washington, D.C., for a one-day, all expenses paid visit to their memorials that are dediated to their service and sacrifices.”

More than 1,500 WWII veterans and 500 Korean War veterans die every day, according to HFK.

“Our goal is to get as many of these brave heroes from central, eastern and southern Kentucky to see their memorials before they pass away,” according to the organization.

Caywood said when the group landed back in Lexington and stepped off the plane, there were thousands of people there, welcoming them home and “red, white and blue everywhere.”

“If it doesn’t take your breath away and make you proud to be an American, then I don’t know what it would take,” he said.

Caywood is a Vietnam War veteran. He served in the Army from April 1968 to November 1970, with a 14-month tour of duty in Vietnam as an infantry combat platoon leader. He said many today still don’t understand what it was like for many soldiers returning from Vietnam, who came home to protesters opposing the war.