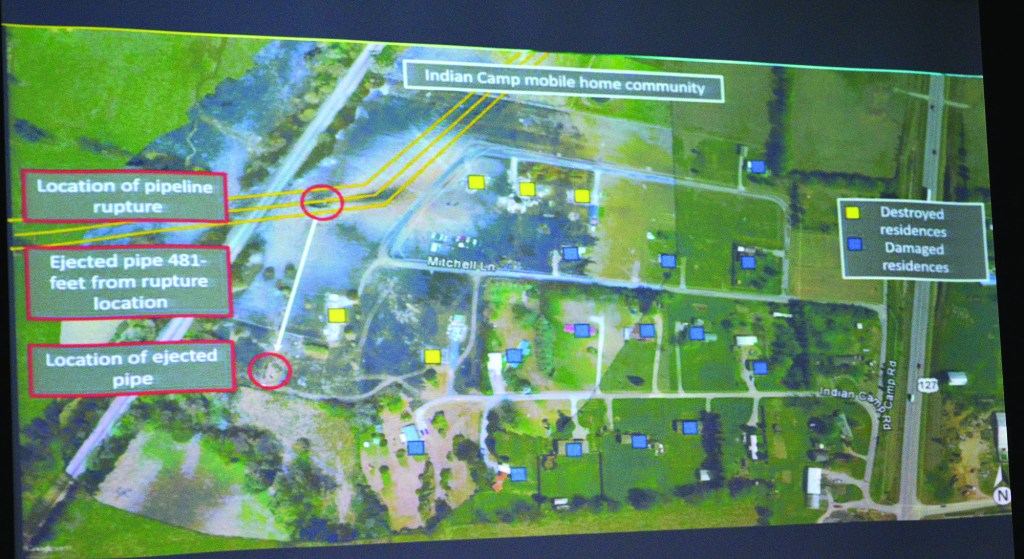 Photo by Robin Hart/robin.hart@amnews.com A photo marking where the natural gas pipeline erupted and the homes that were destroyed or damaged in the Indian Camp neighborhood is part of the presentation the Lincoln County Emergency Services will be presenting to a pipeline safety group in New Orleans soon.

The fire that occurred due to the Aug. 1 natural gas pipeline explosion in Lincoln County was so hot, the metal on vehicles liquified and dripped into metallic puddles. Heat from the inferno could be seen on the National Weather Service radar and was picked up on a satellite imagery system 26,000 miles above earth. People also reported seeing the orange glow from the explosion at the Tennessee-Kentucky border.

“I’d love to tell you everything went great, but we were overwhelmed and we made mistakes. What’s our goal? Learn from our mistakes and quit making them over,” Gilliam said.

Gilliam and O’Quinn shared a video presentation with audio recorded during the first few minutes of the explosion and aftermath and discussed what they learned from the experience.

Gilliam said it took Enbridge (the company that owns the pipeline) about an hour and a half to respond to the event and shut off the natural gas. “We discussed that with them. Could that be quicker?” Gilliam asked. “They’re looking into remote locks or valves so that they don’t have to respond. They can do it from the transmission facility, which would be awesome,” Gilliam said.

“And I’m certainly sure that’s pretty expensive so I don’t know if that will happen.”

The lights in the room dimmed and O’Quinn started a 2-minute video she created using first-hand footage by a shirtless resident as he was escaping the fire and a nearby business’ surveillance video. Photos showed the desolate field and neighborhood destroyed by the immense fire and the crater created in the shale rock bed. The video was accompanied by audio from dispatchers and first responders.

A total of 268 responders and support responders representing 36 agencies from six counties, seven cities, three state and two federal agencies, 10 private agencies and 18 media outlets (local and national) descended on the area in and around the Indian Camp neighborhood in Moreland that early August morning, Gilliam said.

“The best thing about rural response was mutual aid and good neighbors. Everyone comes to help and are willing.

“You guys that were there, thank you so much. … A lot of incidents like this, you show up on the county line and it’s not your county. Nobody would have blamed you if you turned around and went back. But you didn’t and thank you for that.”

Gilliam said, “When you see a face show up and you need help and it’s somebody you know, that’s a warm, fuzzy feeling, I’m telling you.”

O’Quinn said working at the scene before the sun came up, the temperature was very warm. “We didn’t realize it until the fire was out how cool the morning was and we actually needed to put a jacket on.”

As word spread about the disaster, people and agencies “self-responded,” O’Quinn said. New Hope Baptist Church volunteered to become a reception station where victims, families and first responders could go for food, rest and to get assistance. Walmart had staff waiting at the front doors to fill carts with whatever Red Cross volunteers needed for the victims. And members of the community called asking what they could do or bring to help in the situation, O’Quinn said. And they are still calling, she added.

“It was really amazing how people stepped up to help.”

Enbridge continues to have a security detail working in the Indian Camp neighborhood which will be wrapping up in a week or two, Gilliam said. “Things will get back to normal as they can be.”

“Some property has been purchased by Enbridge” and the company is continuing to provide counseling and financial support for their everyday living expenses, he said.

Some people have stated that the only reason Enbridge helped the victims is because they don’t want to get sued. “Well hell, they’re going to get sued. They’ve already been sued, and they knew that,” Gilliam said.

“They (Enbridge) stepped up and spent a ton of money,” on car rentals, utility bills, rent and motel rooms, Gilliam said. “I’m not going to sit and blow their horn all day, but as far as taking care of the essentials, they did as well … much better than we could have been able to do.

“Our goal is to get back to some sort of normalcy. That’s never going to happen over there. Those people over there are probably never going to be normal. They’re going to deal with this the rest of their lives.”