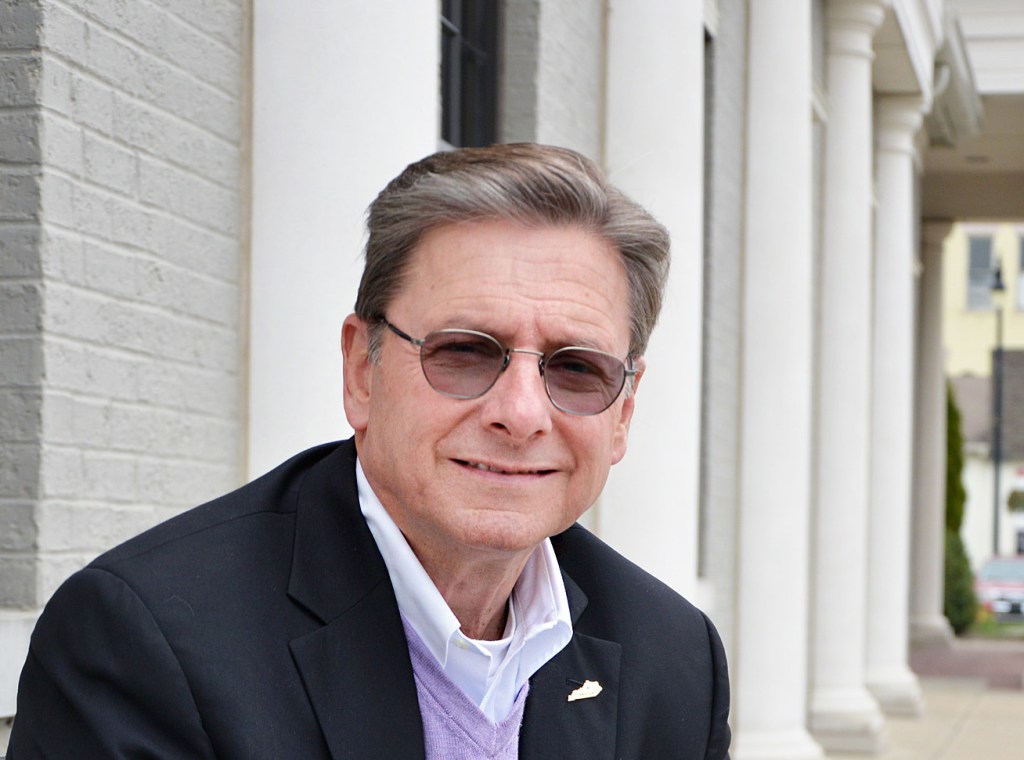 It’s safe to say the mayor of Danville has been the focal point of much controversy lately. Mike Perros was involved in what turned into a sexually-harassing incident with the female director of the Convention and Visitors Bureau during a prior Boyle County Fiscal Court meeting.

Then, word got out about the grievance filed against him by a longtime city employee who was upset about comments he made about her appearance and ethnicity, as well as by how she felt the situation wasn’t appropriately handled with a public apology.

Some have called for Perros to step down or for Danville City Commission to formally censure him. Others have taken to social media, making racist accusations against Perros, claiming this is not uncommon behavior for him.

A group of citizens met recently with plans to form an alliance to hopefully enact change within the community and educate others about why more diversity is needed in Danville. About six of them showed up to protest with signs outside of the last city commission meeting, and a few took to the podium during “hear the public” to condemn the commission and the city; some became visibly angry about what they describe as inaction from officials over what they consider serious allegations.

Perros remained silent that night, as the city commission makes it a habit not to speak during the public’s open mic segment. As letters and columns still come in to The Advocate-Messenger about both situations, and social media continues to buzz with accusations, Perros hasn’t offered any retort.

Friday morning, Mayor Perros agreed to sit down at city hall for a Q&A about the current issues surrounding his behavior. He reached out to City Attorney Stephen Dexter, his main point of counsel involving the incidents, to join the interview, which was not possible due to Dexter’s schedule.

“I’m good with this. I have nothing to hide,” Perros said from a meeting room. “Let’s go.”

AM: You knew about the story we were working on after Joyce Collins filed the grievance against you for commenting about the color of her skin and that she wears wigs to two new employees. What was your reaction to that story?

Perros: “The story was factual. I’ve never tried to disavow this incident. I acknowledged my mistake as soon as I was made aware it had been hurtful to Joyce. The letter she requested from me was on my personal stationary and it was handwritten by me. It was not dictated to me; it was my heartfelt feelings.”

AM: Collins feels she was not appropriately apologized to — not in the way you publicly apologized many times for the Jennifer Kirchner (CVB director) incident. What is your response to that? And why wouldn’t you offer a public one to Collins, now that you know that’s part of her issue with the whole thing?

Perros: “When you get into these types of situations, it gets intricate. I very much rely on counsel, and counsel gave me direction, which I followed. I have indirectly apologized publicly, freely acknowledged my mistakes and missteps. The last apology, I apologized to my fellow commissioners, all city employees and the citizens of Danville.

“As far as why I haven’t offered a public apology — I follow the direction of counsel. That’s a Stephen (Dexter) question; I don’t know.”

AM: You attempted to make a joke during Kirchner’s presentation at fiscal court, by saying she wasn’t wearing socks — an ongoing joke between you and Magistrate Phil Sammons, who likes to point out during public meetings that you aren’t wearing any. Sammons then commented on the attractiveness of Kirchner’s legs. The newspaper received a few comments and letters just after the incident that Sammons should step down, but public criticism about his role has been few and far between since. Why do you think the focal point has been mostly on you involving that situation?

Perros: “Your guess is as good as mine. I knew, or thought I knew right after, that she was forgiving of what happened where I was concerned, but I do continue to hear differently about how she apparently feels. And I do want to share a text with you — I sent Jennifer a note after the whole incident and explained how I would never try to humiliate her in public or demean her in any way, apologizing immediately and offering a conversation. And she was forgiving, right away. You can see right there in her response, she says, ‘I’m not upset with you …’

“I’m in my second term as mayor — not much surprises me. But I will say it’s very disappointing. I could not pinpoint anything that’s happened (between me and Kirchner) over the years. I don’t recall her and I ever having a cross word.”

AM: Not much surprises you as mayor — are you saying there’s a bullseye on you, or people are out to get you?

Perros: “Regardless of the situation, when you put yourself out there as I have as mayor, you are going to get things thrown at you. But this is the first time anybody has ever attempted to portray me as a sexist or a racist — both of which I strenuously deny.”

AM: Based on past interviews and conversations, the viewpoint of what you said to Collins as being a racist statement has completely thrown you for a loop — true statement?

Perros: “The term ‘thrown for a loop,’ — don’t want to say that. I will say it’s been disappointing. I have a well-established, lifelong relationship with the black community, and some of those relationships are very formative for me. Especially at an early age.

“My grandfather and my father owned restaurants, and my dad’s restaurant (in Danville) was open seven days a week, 364 days a year … I grew up there. And the folks who worked with my dad and for him were African-American, and they loved me as much as my parents loved me, and they disciplined me as much as my parents did — and maybe more. If I messed up in that kitchen, I got swatted. Jason Bright, Theordore Harris, Clifford ‘Cookie’ Bradshaw, John Thomas Cunningham, Bob Trumbo, Emma Johnson, Claudine Garr … Just to name the few who come to mind. These were people who loved me and cared for me, and therefore the color thing has never been an issue for me.”

AM: Have you ever considered that maybe you are a bit too comfortable, due to your upbringing, with what you have said to others of color?

Perros: “Oh, they could joke back in that kitchen, and make comments. That’s where I learned what humor was about. … And I’m still comfortable.

“To your point, yeah, things have shifted in our society, and that’s unfortunate. I don’t think we are as honest as we used to be. Back in the ‘70s, used to be able to have TV shows that were satirracle, but showed the difference in people, but you can’t do that today. It’s unfortunate, because the only way we’re going to get past all this division is to realize that we’re all the same. We’re all born the same way, we’re all going to die the same way.”

AM: Have you been surprised with any public responses to these incidents?

Perros: “I will tell you that the number of those people who have expressed support for me — the number of people from the African-American community outnumber whites 2-1.

“I’d like to think they are supporting that as a human, I made mistakes; I’ve owned them and apologized for them. Period. And I hope they’re not supporting me for any other reason than that. I think that this has been somewhat skewed and portrayed to be a racial issue, which I totally disavow.”

AM: You commented on the color of a woman’s skin, because she is black. Do you understand where Collins’ hurt came from, at all?

Perros: “I do now. We always had a jovial, warm, honest relationship. I tease and joke with people of all colors. … But I think the past is still haunting us. … I have always tried to serve as a bridge of communication in this community, between the different races.”

AM: Have these incidents, and the public’s reaction to them, enacted any type of conscious decision to change your behavior?

Perros: “It’s made me more guarded. But I’m not going to stop trying to make people feel a little lighter in their day. I cannot dehumanize myself to the nth degree. How much fun would it be if we all walked around here serious the whole time? There’s enough of that as is.”

AM: Recently, a longtime African-American friend of yours took to social media to describe a racial epithet you used around him. What’s your response to that?

Perros: “I was shocked by that. I can’t even imagine the incident that he refers to. … My question to that person is why didn’t you say something 40 years ago? Why are you just now bringing that up, and how could we have had a good, 40-year relationship with you harboring that hate? Very disappointing to me.”

AM: Where is the latest claim coming from, that you made the remark about a female employee “getting her panties in a wad,” and that as long as you’re mayor, “she will never get a raise?”

Perros: “I own part of that. Here’s the context: This was after a budget meeting where the employees were grumbling because they felt like they should’ve gotten a bigger raise than they did, and that just flew all over me. Because these folks that were grumbling, they’ve got good jobs. They’ve got very good jobs, with benefits — benefits like no others. Every one of them is a millionaire when you consider that they have full-time retirement — they’ve got a 30-year pension coming to them; add that up and they’re millionaires.

“I said it in a general sense, if people don’t like it here, the door swings open. It’s a big, wide world out there, go find your happiness. But the raise part — totally contrived. I never said that. I got nothing to do with raises, that’s why I say it’s contrived. And I wouldn’t want to have anything to do with anyone’s raise.”

AM: Regardless of your political beliefs, it’s a factual statement to say that many are on alert with some of the racial issues happening at the top of the ranks of this country. Can you see how those issues can make certain ethnic groups uncomfortable, perhaps more reactive to what may have been overlooked locally in the past?

Perros: “Without a doubt. I have had a person in the African-Amerian community tell me that unless I could publicly, as mayor, disavow Donald Trump, then I was as bad a racist as Donald Trump. I have nothing to do with Trump. I have nothing to do with D.C. Unfortunately, I have little influence in Frankfort. But I can affect some issues here in Danville, which is exactly why I ran for mayor.

“As somebody who has tried at every opportunity to promote this community, I regret that this has cast it in a less than attractive light. … I was sharing this whole scenario with my (personal) attorney, who specializes in municipal law … he asked, ‘Don’t you all have anything better to do down there than fight?’ Then he said, ‘You live in a tough community.’ And I said, ‘Yes sir, I do.’ And that is not the community I grew up in. And that is not the community I want us to continue to be. Let’s disagree, and accept that it’s OK to disagree.”