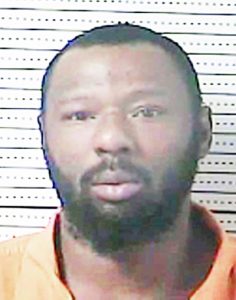 A Danville man with an emergency protective order against him by his child’s mother, who has full custody of their 3-year-old, is in jail after taking the two and keeping them in his vehicle as he drove around town Thursday evening.

Joseph A. Simpson, 35, was arrested at 7:14 p.m. by Danville Police after they received a report of a possible violation of an emergency protective/domestic violence order against him on Nokomis Street.

Asst. Chief Glenn Doan said police located Simpson from a description of his vehicle and conducted a traffic stop.

After an investigation, police found that Simpson had driven to a residence on Nokomis Street where his child and his mother lived. Doan said according to the report, the boy saw Simpson and ran toward him.

Simpson allegedly got out of his vehicle, picked up the child and got back into his vehicle with the child in his lap. The mother saw the incident and ran to the vehicle because she feared for the child, and jumped into the passenger seat before Simpson drove away, Doan said.

Simpson allegedly drove around Danville for about 20 minutes and refused to allow the mother and child to get out, Doan said.

Eventually, Simpson returned to Nokomis and dropped them off near their residence and both were unharmed.

Simpson was charged with: kidnapping of a minor, first-degree unlawful imprisonment, and violation of an EPO. He was also was found to have an outstanding warrant for first-degree burglary.

As of Friday, Simpson was lodged in the Boyle County Detention Center and was being held on a $20,000 cash bond.