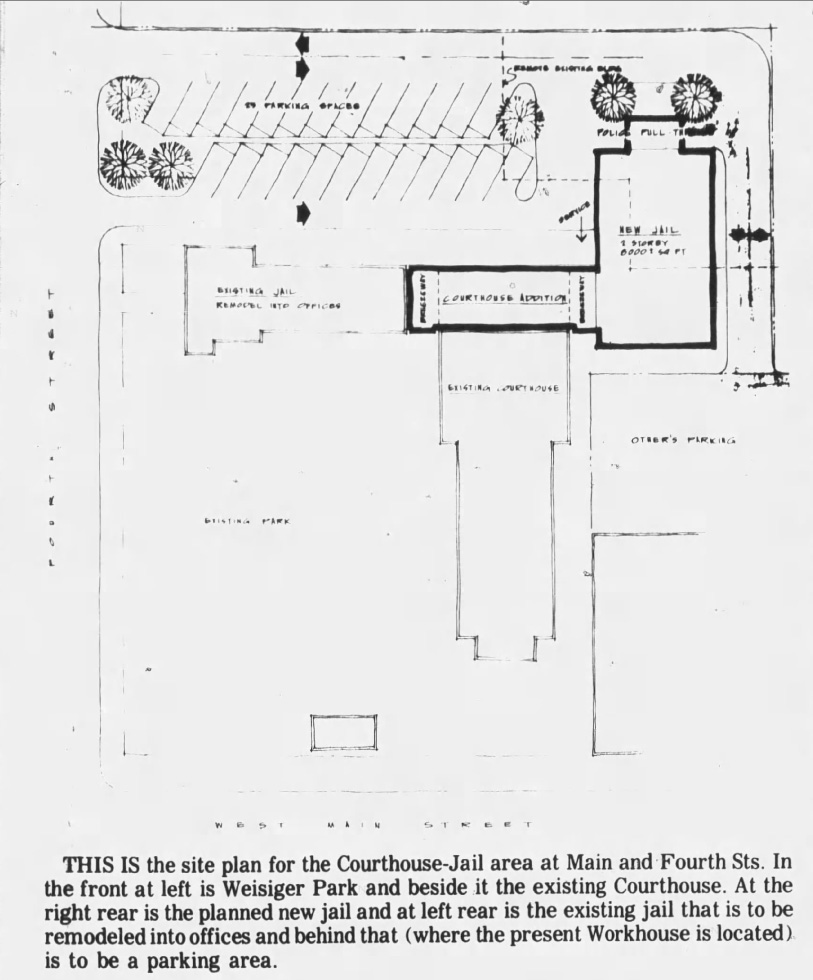 The plans for a new jail in Boyle County were revealed on the front page of The Advocate-Messenger on this day 46 years ago.

The county was planning to and ultimately did build a courthouse expansion and a new 70-person jail on the northeast corner of the Boyle County Courthouse. Construction of the new jail was planned to allow conversion of the old jail space into county and court offices — and that’s exactly what eventually happened. The 1973 plan for the new jail shows the old jail was housed in the portion of the courthouse that today holds the county clerk’s office, PVA office and district and circuit court clerk spaces.

The architect working on the project told magistrates the project was estimated to cost $850,000, but might be done for less if the county could award everything in a single contract.

“The magistrates explained that the new jail will have to be built first so prisoners can be moved to that structure before work can start on remodeling the present jail, and that will have to be done before remodeling can take place in the present courthouse,” according to the story. “… The county is to raze the present garage at the rear of the courthouse, where county equipment is maintained, and magistrates Martin G. Curtis, Jerry Feather and Russell Carney were authorized to go ahead with remodeling a building at the county quarry near Perryville for a maintenance garage.”

The new jail was planned to be two stories, with a first floor that included a prisoner delivery area, a jailer’s office, a “drunk tank and cells for women, boys and girls.” The first floor would also have an apartment and kitchen for the jailer.

“The second floor will be the main men’s cell area, with cell sections for individuals, two-men and four-men,” according to the story. “The new jail will connect with both the sheriff’s office at the northeast corner of the first floor of the present courthouse and on the second floor with the circuit court area.”

The 70-bed jail Boyle was building in the 1970s has since been torn down, after the county moved to its current 220-bed facility in the 1990s.

The counties chose an engineering firm this month to guide them in building a new jail or renovating and expanding the existing jail — a project that could exceed $30 million. A study of the jail and local criminal justice system completed last year recommended building a new 450-bed jail. That represents approximately one bed for every 115 residents of the two counties (many beds would in theory be used to house state inmates).