Mercer takes three of four over Lincoln in regional first round 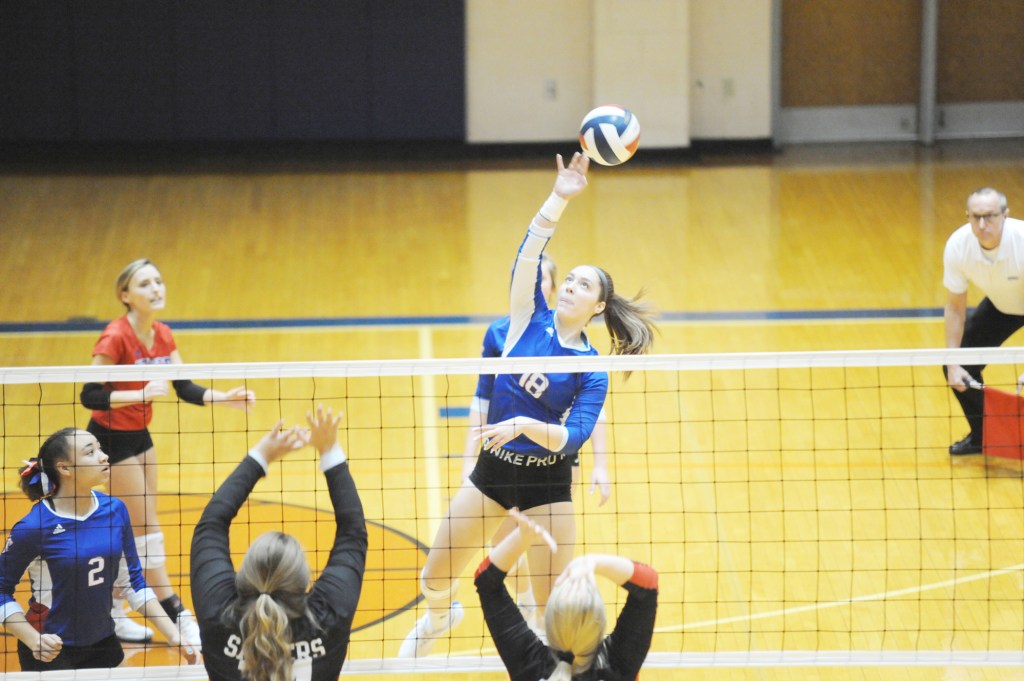 Jaclyn Devine goes for a kill in the first set of Mercer County’s win over Lincoln County. (Photo Derek Brightwell)

When it comes to the postseason, it doesn’t matter how you win as long as you win. That’s the message Mercer County coach is giving her team after defeating 45th district champions Lincoln County 3-1 in the first round of the regional tournament despite — she says — not playing their best.

The Titans came out strong in the first set, taking as much as a six point lead, but the Patriots battled back to be within striking distance when Mercer only needed one point to take the set. Lincoln battled back to claim the next three points and win the set 26-24.

In the second, Lincoln once again climbed out of an early hole — something that they have done all season long. But Mercer kept the pressure up and pull away — not by an extended rally, but rather by quickly taking the serve back from Lincoln County and not letting their offense build momentum. After being tied at 13, Mercer would go on to take the set 25-20.

The third set was all Mercer County. After some quick services, the Titans got on a series of rallies. First a four point swing to jump to an early lead, then several serves saw Mercer take at least two points. The Titans closed out on a three point rally to take the set 25-16 for a 2-1 lead.

Another pair of rallies — three and six — gave the Titans a big lead early in what would be the final set. Mercer was able to stave off another Lincoln charge to put the match to bed with a 25-18 fourth set victory to advance to the second round of the 12th region.

The Titans got big performances from Jaclyn Devine, who led the team in kills with 14, aces with three and tied with Hanna Blevins with 12 digs. Blevins added two aces and nine kills of her own — a season high for her in the latter. Brinkley Prewitt was the team leader in digs with 21 and serves returned with 20 as well as adding two assists. Zoe Yeast had 10 kills for second on the team. Haven Six — back from illness — was by far the assist leader with 39, despite not being at a full 100 percent. 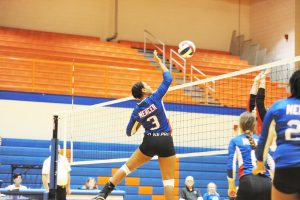 Zoe Yeast rises above the net in the final set on Monday. (Photo Derek Brightwell)

“Jac played good defense, but she struggled offensively. But a lot of her struggles offensively was because Haven struggled getting her the ball,” Flach said about the overall performance. “Haven’s coming back off being sick and didn’t have her best game and that’s what runs your offense. Hopefully by Wednesday she’s up to par and we’re up to our normal team that we are. And we can come out with a win on Wednesday.”

One other bright spot for the Titans was the play of freshman Jai Maria Piazza, who had nine kills on the night to tie her with Blevins for third on the team. Flach credited her with not being afraid to take chances that paid off for Mercer Monday night.

“For a freshman, she had some big hits tonight. There was one that was a quick hit out of the middle,” Flach said. “To have a freshman step in and not be afraid to take those chances — a lot of kids won’t take those hits and that’s her favorite hit. To have her come in and do that and swing the momentum, that’s huge.”

Mercer (18-7) will take on Pulaski County in the semifinals on Wednesday at 6:30 p.m. Flach is looking for her team to bounce back from its performance Monday.

“When we’ve done this in the past — we’ve had regular season games where we didn’t play too well — we usually come out the next game ready to go,” she said. “I’m hoping that’ll happen on Wednesday and that nerves don’t get the best of them.”

Lincoln County (13-16) sees its season come to an end after winning the 45th district for the second consecutive year.