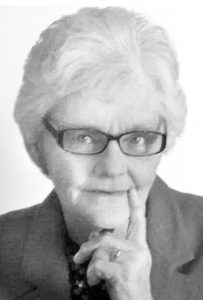 She was born in Boyle County, on October 8, 1940 to the late Cecil “Mink” and Ella Mae Logue Burns.

She was a member of the Beech Grove Baptist Church, a homemaker and enjoyed being with her family and was a grandmother to many.

Funeral services will be held at 1:00 p.m., Thursday, October 31, at the Beech Grove Baptist Church with Dr. Travis Farris officiating. He will be assisted by Rev. Bobby Estes.

Burial will be in the Hillcrest Cemetery at Perryville.

Visitation will be from 4 until 8 p.m. Wednesday at the Carey & Son Funeral Home and after 10 a.m. Thursday at the church.