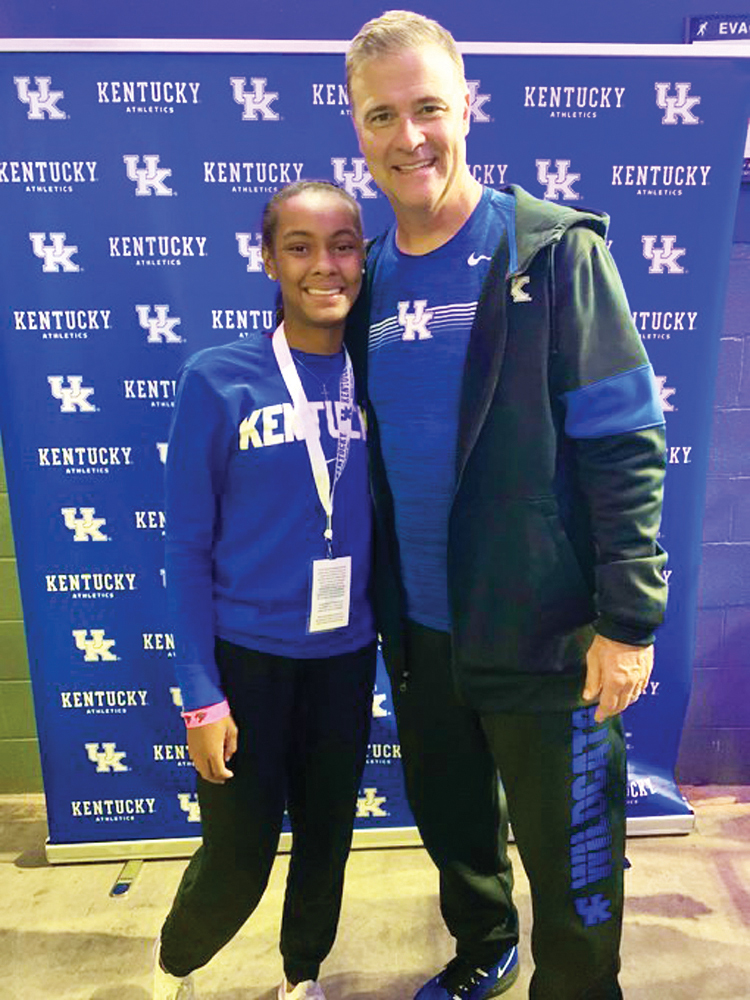 HARRODSBURG — Mercer County freshman Timberlynn Yeast played on a “very competitive” Kentucky Premier travel team that was matched up against some of the country’s best teams.

“Lots of people (coaches) got a chance to see her play then,” said her father, Terry Yeast. “I think when we were in Louisville and Chicago I saw UK watching, which I thought was pretty exciting. In my mind, I thought she had a pretty productive summer and worked her tail off.”

Still, the Yeast family was not expecting the email from her club team coaches telling her she had been invited to Kentucky’s Big Blue Madness by coach Matthew Mitchell and his staff.

“There was a really big smile across her face,” Terry Yeast said. “That was her first experience to get to go at Big Blue Madness. She was super excited.”

Six players off Timberlynn Yeast’s Kentucky Premier team were at Big Blue Madness Oct. 11 and got to take a picture together with Mitchell.

The Kentucky coach — who is not allowed to speak about specific recruits because of NCAA rules — says Madness is a perfect time to show recruits the “enthusiasm and the passion there is for basketball at Kentucky” that makes it different from other schools.

“There’s a lot of enthusiasm in the building on that night and so I think that’s valuable for a young person to see. You can get in Rupp Arena and see what that atmosphere is like and kind of the personality of our program, we try to show that through the introductions and then through the competitions and in our scrimmage,” Mitchell said. “I think you saw the players really showing great personality.

“And then just that one-on-one time that we have around the event (with recruits) and allow them to stay over and come to practice the next day. I think for us if we can get people to come to campus and really see what we’re about as people, and feel the energy that’s here, I think that’s great value for us. We want people who are enthusiastic about Kentucky to come and see us on one of our most enthusiastic nights.”

“The whole experience was pretty overwhelming for her,” Terry Yeast said. “It’s an exciting time as a freshman to have conversations with a college coach.

“She has always been a UK fan, so just getting to see the staff and the girls that she looked up to and, of course, the fact that the men’s team was part of Madness was really exciting for her. She also loved seeing coach Mitchell dancing (at the event in Rupp Arena). He’s very cool and so laid back.”

The Mercer freshman also got to see former Lincoln County standout Emma King, a player she played against last season, wearing a Kentucky uniform and participating in Big Blue Madness as part of Mitchell’s team.

“Last year she had the big task of guarding Emma in the regular season. Her job was to try and slow down Emma. Seeing her at a school as prestigious as Kentucky lets her see she can maybe play there, too. I think that was a huge deal for her,” Terry Yeast said.

“I think they see some potential in her. Basically it just confirmed they are watching her. Coach Mitchell said, ‘I really enjoyed watching you play this summer and continue to work hard.’ That was a confirmation of things we have been saying to her about potential she has but also that no one is going to sign you (to a college scholarship) on potential. There’s a lot of young ladies working hard and she has to do the same thing.”

That was the message she got from former Mercer stars Seygan Robins and Emmie Souder. They were both four-year starters at Mercer and helped the Titans win two state titles. Robins was named Miss Basketball her senior year and now plays at Louisville. Souder plays at Northern Kentucky University.

“They just talked about where the process started with them, what it takes to be a Division I athlete, the time required to work out,” Terry Yeast said. “She asked them a lot of questions and when we left that meeting I said, ‘Obviously you have work to do.’”

Apparently Timberlynn Yeast listened because the next morning she told her father he would need to start taking her to the gym at 6 a.m.

“I said that was too early. She said, ‘You expect me to put in extra time, so since I don’t drive you have to put in extra time.’ That was my cue if I expected her to work extra that I would have to be part of that. So now twice a week we go to the gym at 6 o’clock in the morning.

“That’s the work it takes to be a Division I athlete. I know coach Mitchell tries to stay a couple of years ahead in recruiting and starts looking at players when they are young. But just because he’s looking doesn’t mean there is not a lot of work still to do and she understands that.”