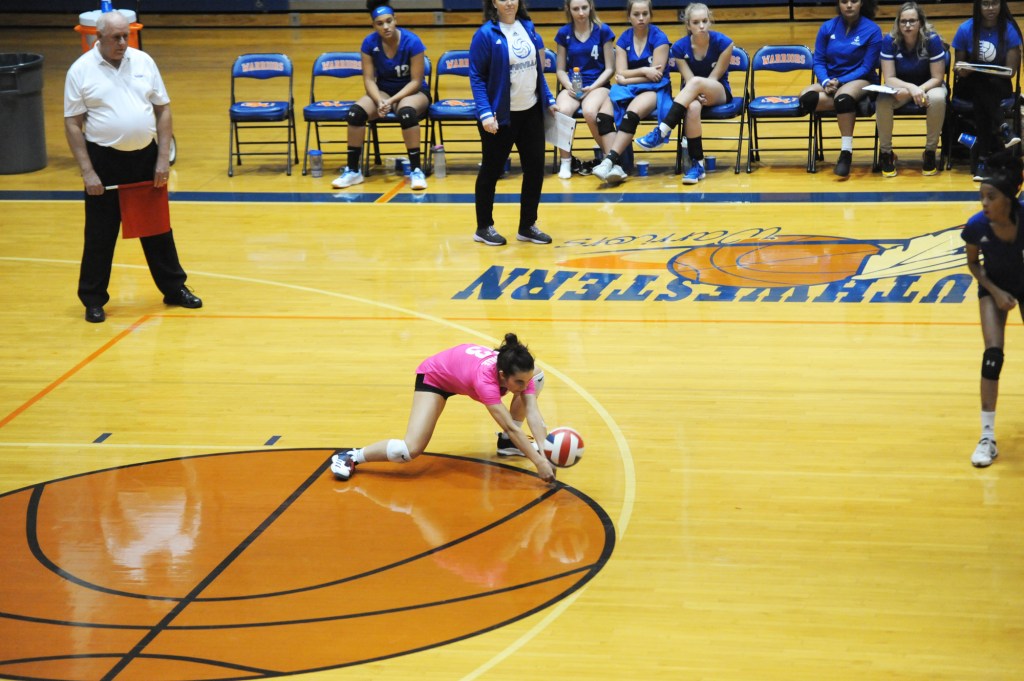 Senior Olga Betonni's presence on defense will be missed next year for the Ads. (Photo Derek Brightwell)

Before Tuesday night’s match against 12th region top seed Southwestern, Danville coach Margaret Myers said that she believed in Cinderella stories. But the Warriors made sure that the 12th region first round was not a fairy tale for the Lady Ads (18-17) as they won in three sets to advance to the semifinals.

“Southwestern is an absolute powerhouse this year,” Myers said. “Just looking at their scores and their level of competition — their strength of schedule — we knew they were going to be tough. That being said, I wasn’t the only one on our side of the court who believed we had a shot.

“Our motto all season long has been ‘There’s always a chance.’ And we had initially started using that in talking about defensive pursuit,” she continued. “It became a motto for what this season stood for. It didn’t matter the strength of our opponent or how tired we were or how hurt we were — there was always a chance we could pull an upset. That’s been our mentality all season long and I think we played with that mentality tonight against Southwestern.”

Southwestern (29-9) — the only 12th region team in the top 30 in the KHSAA RPI rankings at 16 — jumped out early and never let the Lady Ads get comfortable.

In the first set, the Warriors jumped out with an early five point swing that broke the game open. In that set, Southwestern only had one service that didn’t result in at least one point. They would go on to take a quick first 25-11.

A pair of sustained services propelled the Warriors to another quick lead in the second, but Danville fought to keep every ball alive that it could. Multiple points not just in that set, but throughout the match, Faith Breitenbach made miraculous digs and dives to keep the ball alive for her teammates to give the Ads a chance to score.

“That is Faith Breitenbach as an athlete. She will never quit on a ball. She will never hold back,” Myers said about the fiery junior. Every single time she takes the court she leaves it all on the court. She is committed to seeing every play through — whatever her role is in the play. That’s part of what makes her a leader on the court. She demonstrates the way that we want every athlete to behave. That’s why she’s my captain.” 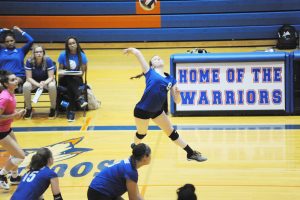 Faith Breitenbach’s intensity is why Margaret Myers says she made her captain. (Photo Derek Brightwell)

Myers also lauded Breitenbach for her intensity, which can be seen not only during the play, but during celebrations as well.

“That’s how she lives life. That’s reflective in her work in the classroom and the way she performs academically,” she said. “It’s reflective of how she competes as an athlete, not just in volleyball but in the spring in softball. It will serve her well. She will be a success because she doesn’t do anything partially. Whenever you have her as an athlete or as a student, you know you’re going to get 100 percent effort from beginning to end.”

The Warriors would go on to take the second set 25-12 and would cruise in the third to close it out with a 25-10 victory to end the season for Danville and the careers of the Admirals’ two seniors.

“We’re going to miss the contributions of both Anna Swann and Olga Betonni,” Myers said. “Olga has been absolutely instrumental in our season. She’s the foundation of our defense — we really built it around her. She has such a high skill level. Anna is everything that being an Admiral means. She’s the perfect example of the athletes that Danville has and are proud to coach.”

However, losing only two seniors means the bright spot for the Admirals is that they return most of their team for next year.

“We didn’t want to get ahead of ourselves looking at next season too early, but in the locker room we’ve already but this one behind us,” Myers said. “We’re going to regroup and get ready for next year. We bring back the core of our offense. We are looking forward to what this team brings back and what we’re going to accomplish next year.”