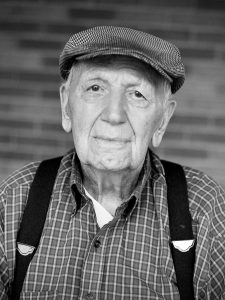 Ancil graduated from Science Hill High School, a member of Junction City Methodist Church and Franklin Masonic Lodge #28. He served in the Army for 2 years and the National Guard in 1935. He was a farmer and a Railroad retiree. He was the last living steam engine brakeman in the district. He was co-owner of Wooden Nickel, working in the small engine shop. He also served as former manager for Danville Memorial Gardens.

Funeral service will be at 3 pm, Friday, November 1, 2019 at Junction City United Methodist Church. Minister Kyle Long will be officiating. Burial will be in Danville Memorial Gardens. Military Honors will be provided by American Legion, Saufley Post #18. Pallbearers will be his grandsons and great-grandsons, Hugh, Alan, Matt, Andy, Mark and Kelsey’s husband, Chris Redding.

Visitation will be 1 pm -3 pm, prior to the service, at the church. Memorial donations are suggested to Junction City United Methodist Church Building Fund. The online guestbook is available at www.stithcares.com