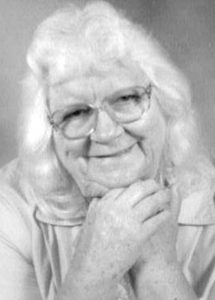 Catherine Brown Owens, 86, of McKinney, KY passed away on Monday, October 28, 2019 at Landmark of Lancaster in Lancaster, KY. Born on April 14, 1933 in Stanford, KY to the late Willis Brown and Dora Naylor Brown. She was a homemaker for most of her life. She attended Geneva Community Church for most of her life.

In addition to her parents, she was preceded in death by one daughter, Corena Yocum; three brothers, J.T. Brown, Gabe Wesley Brown and Ernest H. Brown; one sister, Mamie Privett and two great-great-grandchildren, Kynsleigh Wilcher and her namesake Leah Catherine Cordier.