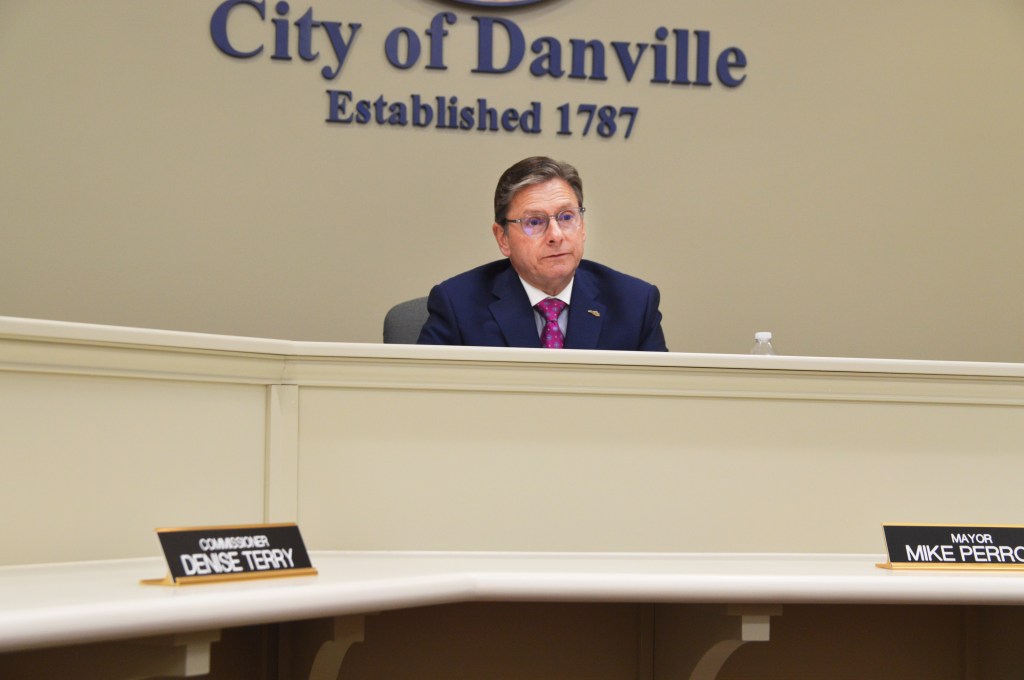 (Bobbie Curd photo) Mayor Mike Perros apologizes to city employee Joyce Collins after she took her seat Monday night, following her statement to the commission. “Ms. Collins, I’m glad you’re here, because I need to extend to you — as I would’ve liked to have done before — a public apology.”

City attorney says he does not control how apologies are issued

Danville Mayor Mike Perros extended a public apology to city employee Joyce Collins Monday night, after she spoke publicly during the “hear the public” segment of the city commission meeting.

Collins filed a grievance against Mayor Perros over comments he made about her appearance and ethnicity, asking for a public apology over the matter. Because the commission deemed the mayor was not acting in an official capacity when he made the comments — while at city hall, signing checks — the apology consisted of a personal, handwritten letter from Perros to Collins, who had also asked that no-contact be part of the grievance solution.

Perros has never denied his statements, which included a comment about the darkness of Collins’ skin. In a previous interview, Collins explained she thought whatever was done in executive session would have to be acted on in open session, leading to a public acknowledgement of what he did wrong.

Perros has stood his ground on the fact that he and Collins have always had a jovial, friendly relationship with each other and that he was surprised about her reaction to his comments, although he’s said he now understands they were hurtful to her.

When asked in previous interviews why he had not given a public apology, Perros said he did not do so upon advice of counsel — referring to City Attorney Stephen Dexter, who later during Monday night’s meeting took issue with that statement.

Not into ‘dirty laundry’

Collins took pauses in between her statements Monday night, regaining her composure.

“Mr. Atkins I’m disappointed in you, I told you — because, No. 1, of the racial statement that was made,” Collins said to Commissioner J.H. Atkins, who is African American.

When Collins, who is also African American, was introducing Perros to a new employee, who referred to herself as “the new Joyce” because she took over Collins’ position, the mayor said the new employee couldn’t be because her skin is not as dark as Collins’. He also pointed out the fact that she wears wigs.

“Denise, I’ve talked to you several times when I was going through cancer, so you know how I felt about my hair,” Collins said, to Commissioner Denise Terry. Collins is a breast cancer survivor, which is the reason she wears wigs; Terry is also a survivor of breast cancer.

Collins told the commission she doesn’t know how they voted, referring to how the issue was discussed in executive session. “But I still feel like that something needed to be done.”

(Government bodies such as city commission are not allowed to take action during executive sessions.)

Commissioner Atkins opened up commissioners’ comments by responding to Collins. 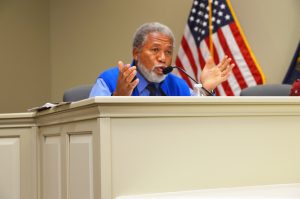 (Bobbie Curd photo)
Commissioner J.H. Atkins talked about how he prefers to handle business by “not hanging anyone’s dirty laundry on the clothesline.”

“I know I’m not supposed to respond to comments … Joyce, if you’ve been slighted by anything I’ve done or said, I publicly apologize right now, today, and I’ve tried to do that several other times.”

Atkins said he never supports inappropriate comments made about someone’s race or gender. “And I hope I’ve lived my life to work against that. So please accept my apology, OK?”

Atkins went on to say, “and to the public out there, I continue to apologize.” He said that after the last meeting, where some spoke about their issue with the city commission not formally reprimanding Perros, he received an email titled “sympathy.”

“It was about sympathy and survival. Since the mid-part of June, when all this controversial stuff occurred, I find myself to be in what I call survivor mode. I am apologizing publicly as well as I’m apologizing privately. If I’ve done anything to hurt someone’s feelings, or if I didn’t do something that I should’ve done and it hurt someone’s feelings, it was a mistake of the head, not a mistake of the heart.”

Atkins said he’s been “very, very moved” by what’s been going on in the community. “But I must remind my community that I operate from the standpoint that I don’t believe it’s appropriate to hang out someone’s dirty laundry on the clothesline. And if you can … understand my old grandma’s statement, then you can understand how I operate. I don’t think it’s appropriate for me as a commissioner or as a private citizen to hang someone’s dirty laundry out on the clothesline.”

“I have tried to solve people’s problems without making it public,” he said. “If you folks are having an issue and we can resolve it privately and shake hands, then we can go out and have a smile on our face.”

‘Your decision, not mine’

“Ms. Collins, I’m glad you’re here, because I need to extend to you — as I would’ve liked to have done before — a public apology.”

Perros said he’s always appreciated and enjoyed their relationship, “and it hurts me to my core that I hurt you … That’s all I know to do, Joyce. And anything else you have in terms of thoughts or — let Mr. (Ron) Scott (city manager) know; let me know. I’m taking this opportunity to apologize to you publicly.”

Atkins asked City Attorney Dexter about Kentucky Revised Statute 83A.040, because it’s been circulated in the community, “and I think we need to offer an explanation …”

The commissioner was referring to information from Elaine Wilson-Reddy, a community columnist who contributes to The Advocate-Messenger and wife of Commissioner Kevin Caudill. Her last column stated: “Kentucky Revised Statute 83A.040(9) states: ‘Except in cities of the first class, any elected officer, in case of misconduct, incapacity, or willful neglect in the performance of the duties of his office, may be removed from office by a unanimous vote of the members of the legislative body.”

Dexter said that in the case of removal, there are three areas under the law in which it’s allowed, “and it’s a high bar to achieve for elected officials. … incapacity would be a standard of where you may lose faculties of your mind … some impairment to prevent you from doing your duties.” Dexter said willful neglect means habitual absences or failure to perform key responsibilities.

“Misconduct, frankly … rises to the level of criminal activity that is defined by statute and case law supporting it,” he said.

Dexter said that’s a general overview, but the statute does give a legal definition to those three specific reasons.

“And again, misconduct tends to be, under the case law, defined as a criminal statute,” Dexter said.

Atkins said he raised the question because “unfortunately, I’ve been reading letters to the editor, more than I normally do, so that question was raised because of a letter to the editor. And it’s caused more emails and phone calls to come my way, and I just want to make sure I have the right definition for misconduct when I try to answer citizens’ concerns about the issues we’re faced with.”

Dexter said this would be a good time for him to reiterate his role with the city commission.

He said there are times that may “look differently to those in the public,” but it was important to know that he “protects that role very seriously.” Dexter said it’s his role to advise the commissioners as a collective board, “and not any of you in any individual capacity, in whatever matter may appear, whether it be an ethics (complaint), grievance of a personal nature — whatever it may be, I don’t do that.

“ … So I don’t provide you individual advice, period. You know that; the public should know that. I also would never tell you anything that would be counter to any moral or ethical standard you personally have … which would be incumbent upon you to exercise, not upon me to give you advice and consent for it.”

Terry reminded the city commission that it has a “Covenant of Courtesy” that probably needs to be pulled back out to remind the public about it, “maybe even explain it a little.”

City Manager Scott said the document is the product of a city retreat from about two years ago, “where we talked about city issues and how we can address the city’s business.” He said the three-page document affirms “the respect we show the public when they present issues to us, the respect we have shown by the commissioners to one another, respect for the ideas of the city manager.”

Scott said perhaps they should look at it again and “see if those covenants are still those that you firmly agree with, or if there needs to be any modifications to those, in terms of how we interact with others within this community.”

Atkins said Dexter is “1,000% correct,” he just needed some direction on how to answer people, in light of the current issues. “This thing about misconduct — people just think if I backhand Commissioner Terry, that’s misconduct. She might slap me back, but it’s really not misconduct, it’s just an inappropriate action … Our community has a desire for us to accomplish some things that are not on our agenda and not within our power.”