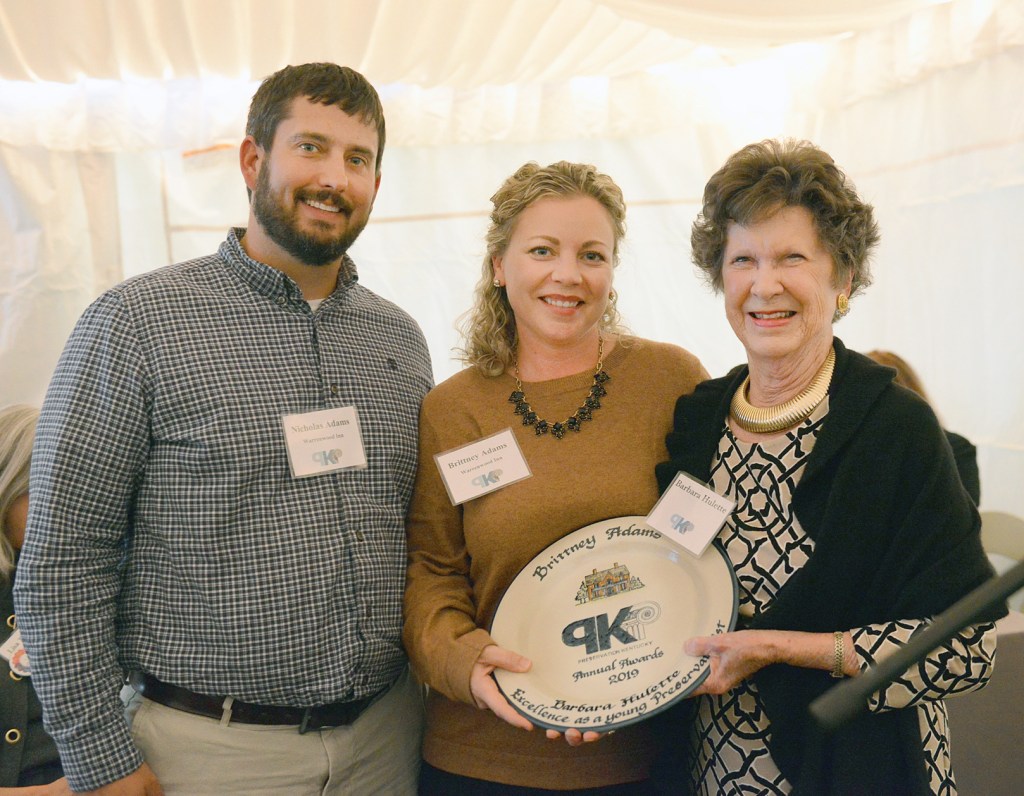 From left, Nicholas and Brittney Adams and Barbara Hulette at the Perservation Kentucky annual awards and meeting. (Becky Gorman)

A young, Boyle County business owner has received a state historic preservation award that happens to be named in honor of another local resident and preservation advocate.

Brittney Adams, proprietor of Warrenwood Manor was given the Barbara Hulette Excellence as a Young Preservationist Award, which honors people under age 40 who have demonstrated exceptional leadership in historic preservation endeavors, during the Preservation Kentucky awards and annual meeting in Louisville on Oct. 19.

Hulette lives in Danville and is active with several preservation organizations, including the Boyle Landmark Trust and Preservation Kentucky. Even though she is the namesake of the ward, Hulette does not choose the recipient each year. “I was thrilled that someone locally was given this award,” Hulette said.

“It was such an honor to be given the award because she (Hulette) is such a dear friend,” Adams said. Plus, she’s been given the opportunity to work with and learn from Hulette, she said.

“She is a celebrity in the preservation world.”

Adams was honored for her work on Warrenwood Manor, an event venue located just outside of Danville on U.S. 127. When she and her husband acquired the stately 1856 Gothic Revival house, it had been vacant for several years.

“She didn’t see a run-down old house. Through the dust and water damage, she saw a place perfect for celebrations,” said Hulette as she introduced Adams during the ceremony.

Adams said she’s thankful for everyone who helped save and restore Warrenwood, including family, friends, the community and the craftsmen. “I am so appreciative of everyone.”

Adams began renovations in 2014 and continues to make improvements to the structure. “Brittney has methodically built a business that sustainably supports incremental property improvements,” Hulette said.

Through Adams’ advocacy for historic preservation, she has “inspired a new generation into action by promoting social media discussions on heritage, responsible restoration and creative solutions to preservations issues.”

Adams said she and her husband Nick attended the meeting with Hulette and when they entered the room, Hulette “was swarmed. … Everyone wanted to talk to her. We have our own little preservationist jewel here in town.”

“I knew she had a lot of experience in local preservation, but I didn’t know it was on such a national scale,” Adams said during a recent Convention and Visitors Bureau meeting of which she is chair.

At the same meeting, CVB Executive Director Jennifer Kirchner said, “To have the Barbara Hulette Award, and her (Brittney) to get it, it is such a beautiful thing coming together.

Established in 2012 to honor Kentuckians making exceptional contributions to the preservation of the Commonwealth’s rich heritage, the annual awards feature projects from urban and rural communities around the state and underscore the economic and social benefits of historic preservation. They are named after dedicated Kentuckians who have a long and distinguished career of volunteer and/or professional service to preserve Kentucky’s architectural, cultural and prehistoric heritage:  Edie Bingham; Christy and Owsley Brown II; Linda Bruckheimer, Helen Dedman; Barbara Hulette; Patrick Kennedy; David Morgan; Ann Early Sutherland; and, new this year, Tim Peters and Lois Mateus.