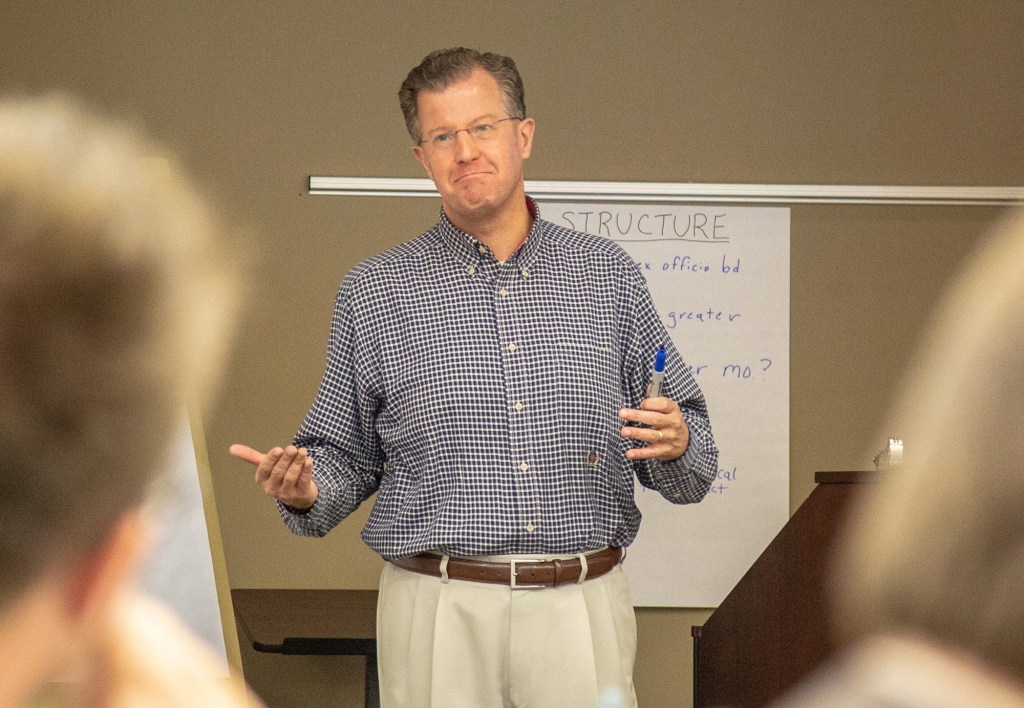 Jody Lassiter, president and CEO of the Danville-Boyle County Economic Development Partnership, facilitates discussion during a board retreat. (File photo by Ben Kleppinger)

Meetings of the Danville-Boyle County Economic Development Partnership Board of Directors could become less frequent, with an emphasis instead on work being done by the EDP’s committees.

The EDP board members were generally open to the suggestion of meeting once every two months when it was made by Danville City Manager Ron Scott at this week’s EDP board “retreat” meeting.

“With as much work as is being done in committees now … would it be more effective or efficient if this board met every other month?” Scott asked.

“To me, that’s a great point,” Gibson said. “… Given the fact that our committee structure is so much more robust than it was historically — which is part of what we set out to do when we reorganized this body — we seem to be having less specific discussions at board meetings and more specific discussions within the committee meetings.

“Therefore the board meetings are left more for action items. And given the low frequency of action items, it seems reasonable to consider going with that plan.”

EDP President and CEO Lassiter said he knows of other economic development agencies in other communities where the full board does meet less frequently and committees tackle a lot of work in between. But he added he wanted to “put on my CEO hat” and note that the committee members should ideally be taking the initiative on work under that structure.

“We (EDP staff) don’t need to be preparing the substance of the committee meetings,” Lassiter said. “… We’ve got to have actively involved chairs that are giving leadership as to what the content is.”

Gibson added that economic development work is often slow-moving — “it’s a lot of drips” into a bucket over time. So meeting less frequently would potentially allow the board to see better movement on projects from one meeting to the next, he explained.

During the EDP board’s discussion of its strategic plan at the Wednesday retreat, it also: