Have a good date by seeing ‘Bad Dates’ 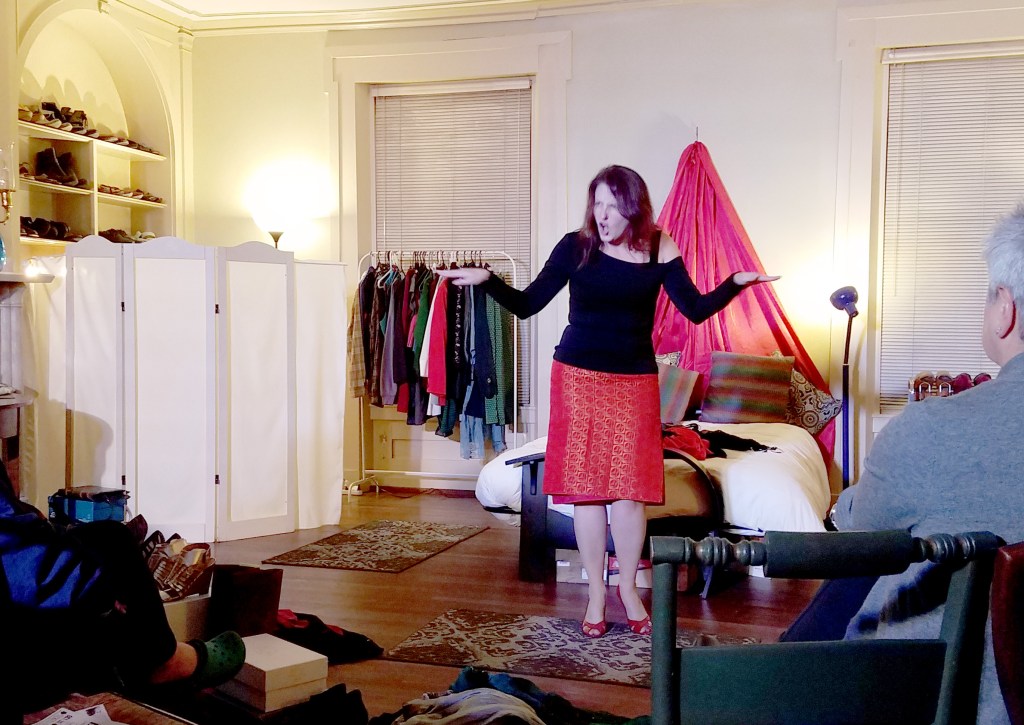 Scarlet Cup Theater’s newest show, “Bad Dates” will leave you feeling like you just made a new friend.

The play is about Haley Walker (played by Centre theater professor Jennifer Goff), a single mom in New York City raising a teenage daughter, working a full-time job and trying to reboot her love life.

It’s set inside Walker’s rent-controlled apartment in the Big Apple. The roving theater’s location choice this time — the parlor of the historic Caldwell House at the north end of Maple Avenue — doesn’t sound like the best choice for recreating an urban apartment in a bustling city. But in fact, it does a far better job of placing the audience at the scene than a stage and theater lighting would.

Goff performs masterfully in the one-woman play. The entire performance is a series of vignettes in which Goff speaks mostly to the audience directly, though not as if they’re actually in the room with her. As she struggles to find the right clothes for what turns out to be a bunch of “bad dates,” she also struggles to figure out her life and whether the things that happen to her hold significance or not.

Goff’s conversational tone is engaging and honest; she makes you feel like a close friend with whom she shares — almost — everything. She takes the audience on an intimate roller coaster of emotions that feels more personal and real than should be possible when attending a play.

Scarlet Cup is a unique theater organization that prides itself on running “occasional and unexpected” shows. That means putting on plays for a few days at a time in places not designed for theater, such as past locations like KSD’s Jacobs Hall and the Third Street Methodist Church building. This makes every Scarlet Cup production a unique treasure that won’t ever be replicated in the future.

The old Caldwell House — so old that parts of it were around when Kentucky was Virginia — isn’t the weirdest location ever chosen by Scarlet Cup, but it’s certainly interesting. The ability to tour the house before the play starts is a nice bonus.

There is less of a relationship between the location and the play selection than in previous productions — such as the air-travel comedy “Departures,” which was performed at the Danville-Boyle County Airport. But every Scarlet Cup play is different and “Bad Dates” is no exception. This time around, it’s less about the script-location connection; it’s more about just enjoying a really good play that also happens to be inside a historic home.

If you get the chance to go, “Bad Dates” is a great choice if you want to have a good date.

“Bad Dates” runs Oct. 31 through Nov. 3, and Nov. 7-10. Thursday through Saturday shows are 8 p.m. and Sunday matinees begin at 3 p.m. Tickets are $20 and seating is limited. They may be purchased at danvillearts.org or by calling the box office at (859) 319-1204. Danville’s Boy Scout Troop 119 will serve as parking directors and escorts for the guests.