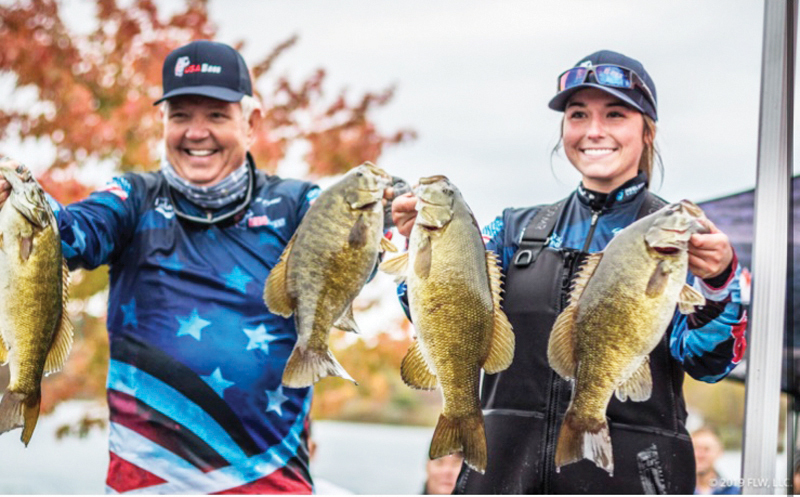 Adjusting to your first year in college can be tough. Moving into a dorm, being away from home, making new friends, representing your country in an international fishing competition. Ok, that last one might not apply to everyone, but it does to Campbellsville University freshman and Boyle County alumnus Hannah Wesley.

Wesley was the only high school angler invited to join Team USA in the Pan American Bass Fishing Championships held on Friday, Oct. 18 on Lake St. Francis in Ontario, Canada.

“It was really unbelievable. I’m honored to fish for Team USA and represent my country and my school,” Wesley said about the event. “It was awesome. Just a much bigger crowd and so much more attention on you.”

Alongside her was a team of 15 other anglers, including professionals, that finished in second place overall, but produced the top three finishing teams.

For her part, with teammate Charlie Evans, Wesley finished 20th overall with a total weight of 32.9 pounds. After starting the event slowly in the morning session, the duo produced one of the biggest hauls of the tournament with a 20-pound afternoon bag to climb into the top 20.

Last year, Welsey and Rebel teammate Sam Clark finished 10th in the KHSAA state tournament and was named to the Bassmaster All-State team — one of 62 nationwide to be selected and only four within Kentucky.

In just her first year at Campbellsville University, she already has ascended to one of the highest levels an collegiate angler can achieve with her appearance in the PanAm Championships, and she knows that that experience will only serve her well at the collegiate level — as did her last year at Boyle.

“It helps a lot with the bigger college competitions,” she said about PanAm. “College is a lot like high school, but with so many more people. By my senior year (at Boyle County), competitions had started to grow and that was very helpful, too.”

Wesley — who hails from Junction City — said that having the support not just of her new college team, but her high school as well, was a huge motivator for her in the tournament.

“It’s awesome. (Boyle) Coach (David) Christopher is awesome in everything he does. He’s one of my biggest supporters,” she said. “It means so much to me to have so many people supporting me back home.”

It wasn’t just a collection of the best anglers in the Americas that Wesley had to contend with, but also uncooperative weather. The event was supposed to begin on Thursday, but was canceled for inclement weather. Friday wasn’t much better as the conditions we still cold and windy. Wesley said that having a practice day on Wednesday with similarly poor conditions helped a lot while on the lake.