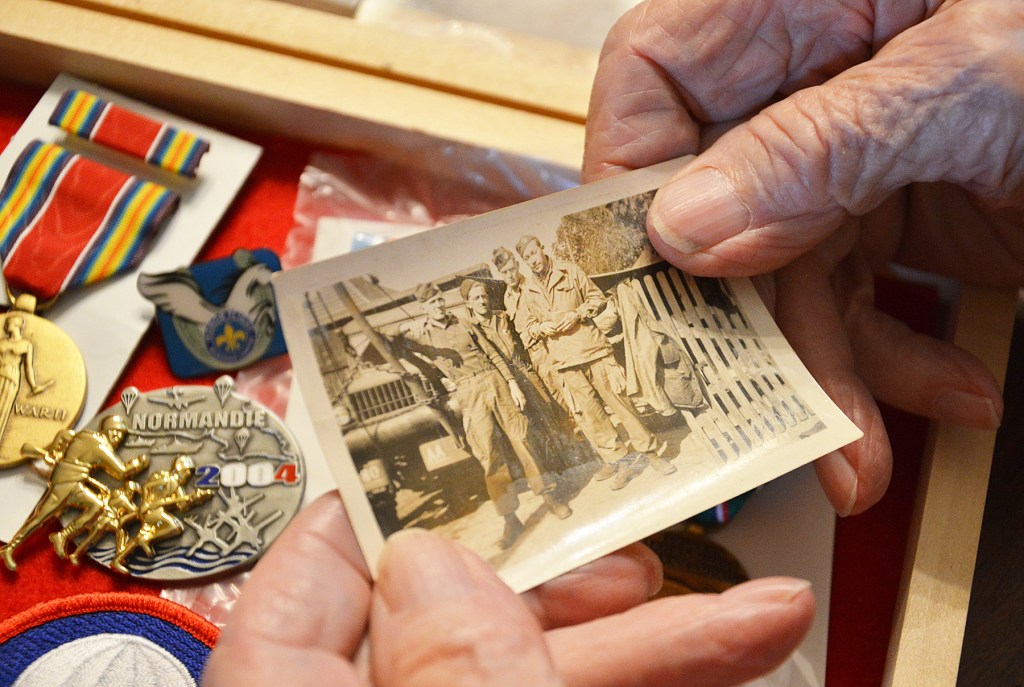 Paul Chandler holds a faded black and white photo of himself, far left, and three of his buddies during World War II.

Jim Chandler got a call last week from the VA Health Care System in Lexington about his dad, Paul.

“They had to call me or my brother Mark, because Dad can’t hear,” Jim said. He was told his father — a veteran who will turn 101 on Nov. 5 — would no longer be covered by VA benefits. “I said, ‘Why?’ They said his retirement income is too high.”

He’s not exactly sure how much Paul draws each year, maybe around $40,000; “but it’s not very high at all. He’s a retired state worker.”

Secondly, Jim says, his dad is a World War II combat veteran, decorated with six battle stars. “I didn’t even think it mattered what he made.” 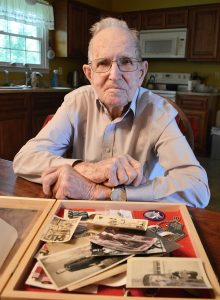 Paul Chandler, 100, of Danville, was a member of the 82nd Airborne Division 325th Glider Infantry on D-Day in Normandy.

Paul was sworn into the Army nine days before Pearl Harbor; he was in for the invasion of North Africa, Sicily and Italy; landed in France in a glider on D-Day, and fought the Battle of the Bulge after that.

“Then, he went into training for the Normandy invasion, with the 325th GIR — the glider infantry regiment, 82nd Airborne,” Jim says. “He’s more than served his time. He should be getting some kind of check … but he doesn’t ask for that.”

Jim says his dad didn’t even begin to receive his partial coverage until he was well into his 90s.

“He’s not even getting full benefits, just hearing aids and one perscription,” he said.

And it took three times trying in order to get that partial coverage. Jim tried twice to get his dad covered, but it wasn’t until Heather French Henry got involved that it actually happened.

Veteran Affairs during the Gov. Steve Beshear administration. “And I’m the daughter of a veteran,” Henry said.

Henry has been on the case for Jim’s dad, much like she has for many other veterans, in what is an all-too-common scenario: “They’re looking at unfortunately cutting his benefits due to his income … it is an unfortunate circumstance when it comes to the income threshold if they don’t have a service disability.”

Although Paul’s family is certain his hearing loss is due to his time served — no one else in the family has had any hearing problems — they realize that because he didn’t sign up for benefits early on, there’s no way to determine that.

Henry said when vets have a service-connected disability, “that puts you in a different classification. He could be eligible, and he’s just gone his whole life not having filed a claim. That unfortunately happens … Because they went to work after coming home from war, got on private insurance or just don’t think about going to the VA.”

Not all veterans get health care

Catherine Trombley, public affairs officer for Lexington VA Health Care System, says civilians think any veteran can receive covered care. “Unfortunately, that’s not the case.” She says there are different levels of eligibility, depending on whether their conditions have been linked to service-connected causes or proven to be aggravated by their time served.

Most of the time, when veterans come in to sign up for treatment, the VA takes their word, she said. “Sometimes they don’t think about maybe an investment account or pension they get; they don’t calculate it into their overall net income. What happens is we do an audit, just like the IRS, which goes through and pulls from Treasury, IRS and the Social Security Administration.”

She says for vets who enrolled for benefits after January of 2003, they can only get treatment if they’re means tested. “Meaning that their income has to be below a certain level, which is basically poverty. It’s incredibly low,” Trombley said.

Trombley says this happens a lot, “and it’s incredibly frustrating for so many of us here, because we’re in the business of treating vets. That’s what we do, and what we want to do.”

She says the audit has always been around, but now it’s been automated and is centrally managed. “How the audit is set up now, (with) technology and being able to share data with other organizations, makes it more streamlined, so it’s a matter of vets having to come in and show their income.”

Trombley says sometimes veterans have other medical bills and expenses they don’t mention, which can help them gain eligibility; those expenses are subtracted from their income, like elder care or assisted living expenses, for example. But the VA must be aware of it in order to subtract it.

Paul’s other son, Mark, said that over the last three years, “we had to put my mother into an assisted living facility and Dad had to pay out of pocket close to $100,000 … “

Trombley says cases can be reassessed, as well.

Problem is getting more attention

Word has been circulating locally about more than just Paul’s case; many local advocates, like veteran Jack Hendricks, say it’s time to act to change things.

“This thing has happened, and it’s happened all over, but now it’s hit home, and hit some people who want to do something about it,” Hendricks says.

Hendricks says it’s a much wider problem than just benefits; the suicide rates among veterans are astronomical, and vets also make up a disproportionate share of the homeless population.

“And nobody’s helping them,” Hendricks says. “That’s got to be changed. It’s sickening.”

Trombley says she doesn’t know the actual number of vets being denied benefits currently, but she says there has been no actual increase in those losing benefits due to the automation of the system. But “now we have less ways to intervene, because it’s all centrally managed.”

“I think it has more to do with the day-to-day, 24-hour news cycle we’re in with social media, so the issue is getting out there more,” she says.

As it should be, Hendricks says, adding that people need to be calling their lawmakers. He says he got a call from a veteran recently who was told he would no longer be covered for a medication which he’d been getting for 18 years.

“WWI vets found themselves in the same predicament about 15 years ago,” he says. “They changed the law in Washington and said they would be exempt from the rules and regulations of income … That’s what they’re going to have to do now for WWII vets. And no one is blaming the VA (hospital), we just need to get lawmakers to fix this thing.”

Trombley also feels part of what’s going on is due to how the “national narrative on the VA has changed. Several years ago, following the crisis in 2014, not everyone wanted to be treated by them. Since then, however, studies have shown the VA is comparable to “or even better than the private sector.”

“I believe that’s how it is here, too,” Trombley says of the Lexington VA. “We are one of the VA’s best facilities; veterans want to come here. So that’s part of it, too — maybe in 2012, 2014, that may not have been the case because of everything circulating nationally; the VA was in the national news daily,” but now, she says, “the narrative is supporting the work VA is doing to turn that around.”

The complaints of not being able to be covered are nothing new, she says.

“I’ll tell you the one complaint we hear over and over — it’s about not being able to get our care because they make too much money.” She says when she represents the VA at events, several vets say they’d love to come, but they can’t.

It’s a major frustration for the VA, she says.

“We’re in the business to serve vets and we think we do it better than anything else. We want to serve as many as possible. Last thing we want to do is turn them away, but we have to carry out the law.”

Since the VA is considered part of the administrative branch of the government, it can’t lobby Congress.

“That’s where the VSOs (veterans service organizations) come in handy — American Legions, VFWs all have lobbying arms,” Trombley says. “Ultimately, this is one that our Congress has yet to fix. Until … there’s a change in the law, we’re bound to follow it.”

Rep. Brett Guthrie was contacted for comment on the issue. He’s a Republican over the 2nd Congressional District, which covers Fort Knox, Owensboro, Bowling Green and Danville.

“It is unconscionable that our brave World War II combat veterans would be denied care from the Department of Veterans Affairs. I will be reaching out to my colleague, my good friend Congressman Phil Roe, who serves as the top Republican of the House Veterans’ Affairs Committee, to talk to him about this issue,” Guthrie said.

But in the meantime, he says his office “stands ready to help any veteran who is having problems with the VA.” Guthrie urges them to contact his office by calling (270) 842-9896.

“My team is ready to help any veteran navigate the often frustrating process of dealing with the VA.”