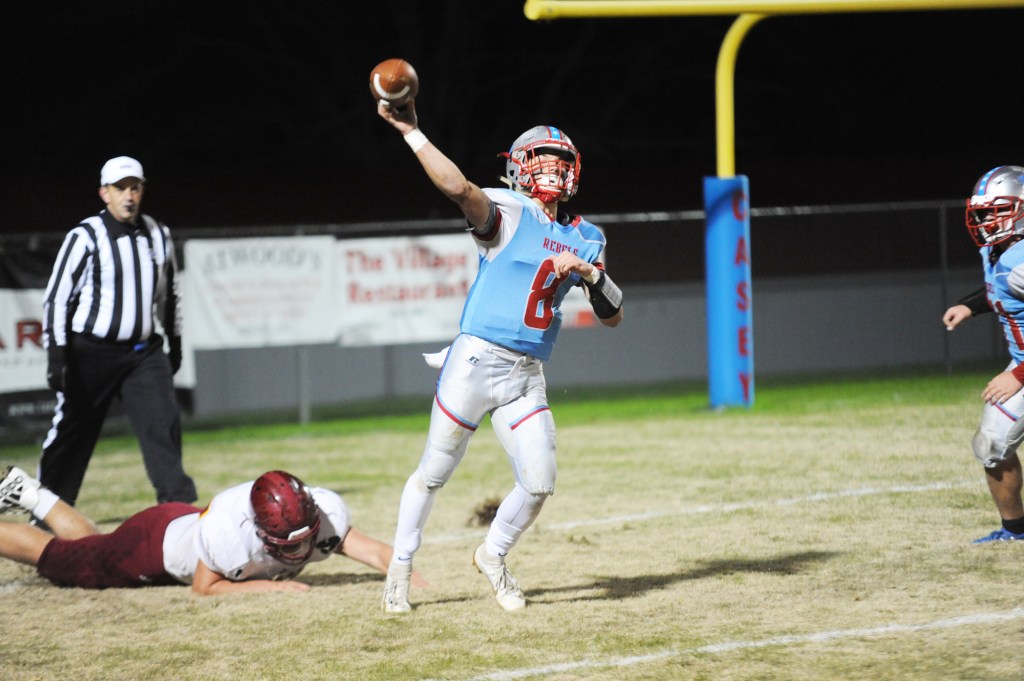 It didn’t take long for Casey County to fire the cannon Friday night when the Rebels closed out the regular season with a 22-6 victory over Garrard County.

On the first play of the game, senior quarterback Reece Brown hit fellow senior Collin Iski for a 51-yard touchdown to start their last home games as Rebels off right. Casey would convert the 2-point conversion to go up 8-0.

After forcing a turnover on downs on Garrard’s first offensive possession, the Rebels put together a strong three minute drive and looked poised to score again but fumbled the ball in the end zone for a touchback.

After a Garrard punt and a Casey turnover on downs flipped the field for the second quarter, the Golden Lions put together one of the most impressive drives all season.

Starting on their 19 yard line, Garrard drove the length of the field on 19 plays spanning nine full minutes of game time to score on a Christian Hansford quarterback sneak. The drive almost died with a fourth down fumble in the red zone, but junior offensive lineman Jon Rayburn was able to fall on it for a first down. But the Golden Lions couldn’t convert their own 2-point attempt and the Rebels still led.

With only 1:37 left in the half, the Rebels didn’t waste any time in driving the field to extend that lead when Brown connected with senior Adam Price for a 37-yard score, leaving Garrard only 39.2 seconds in the half.

“Offensively we’re used to that,” Casey coach Steve Stonebreaker said about the drive. “Every Thursday we practice the hurry up offense and that’s why I used that time out when they were on the goal line to save us a little bit of time because I knew we’d be capable of pulling something off.

“But man, that’s just a belief that our kids have. They have a lot of confidence — the guys who take the field offensively — that we can score in a short amount of time if we have to.”

The third quarter was a defensive struggle. The only drive that didn’t end in a punt was the opening drive when Aiden Foley — who was in at QB for this drive to test out Hansford’s ankle at half back — couldn’t complete a fourth down pass and the ball was turned over on downs.

Garrard’s final drive of the third quarter carried over to the fourth, but met the same fate as its first second half drive. That was not the case for Casey, who would score on another big play by Brown — this one a 45-yard touchdown run down the Rebels sideline to put the game to bed.

That’s typical Reece Brown where he’s heading up in there and breaking a couple of tackles and accelerating,” Stonebreaker said. “He does a great job of accelerating into the end zone.”

Garrard’s final two drives of the game ended with Casey’s Logan Stephens holding the ball after one play. The first one was on a run up the middle when the ball popped into the air and Stephens fell on top of it. The second one was a rare pass from Hansford that ended up in Stephens’ arms. 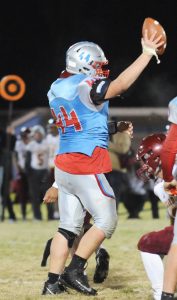 “He really stepped up. Our entire defense did a really good job the second half,” Stonebreaker said. “I don’t know how many first downs they had in the second half, but it wasn’t many. It wasn’t like that drive they had in the first half. He really stepped up and did a tremendous job to give us two big turnovers there. If you can do that and have a three score lead, it’s easy to go ahead and drain the clock.”

Garrard’s run heavy offense did result in the Rebel defense on the field for long stretches at a time, and that’s something that Stonebreaker said his team needs to work on going forward.

“The biggest thing is you have to be more physical than them and get them off the field,” he said. “So when you get those opportunities and you’ve got them in third down and fourth down you have to get off the field. That’s the key to getting an offense like that out of sync and out of rhythm — it’s keeping them on the sideline.”

Both teams will start their postseason journeys on the road next week. Casey County will travel to Taylor County and Garrard will be at Bell County.