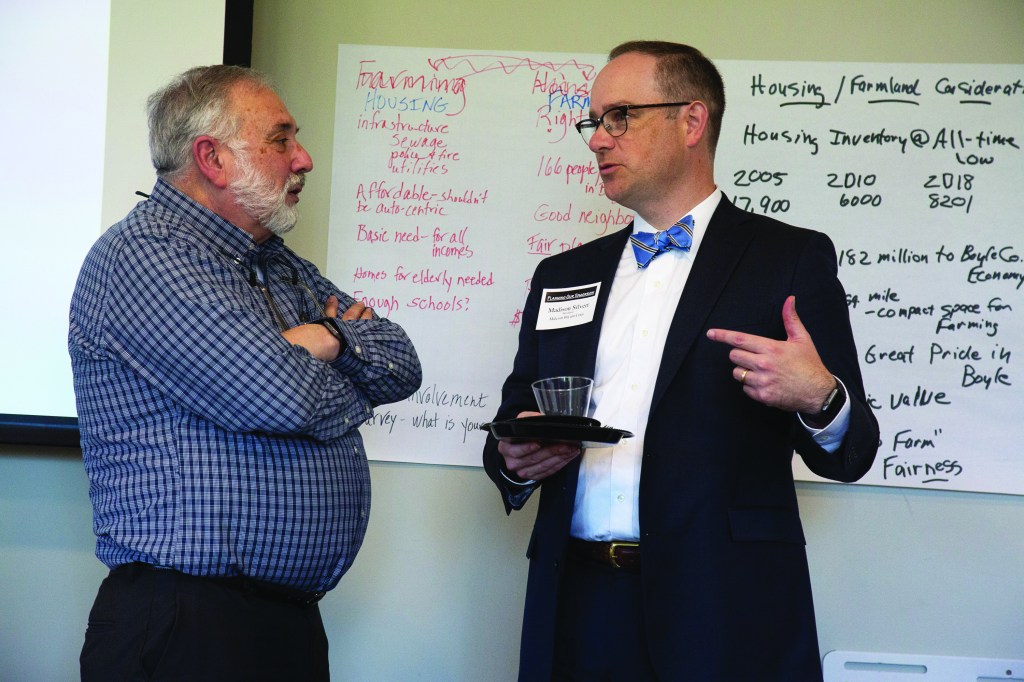 Madison Silvert, right, talks with local P&Z Commissioner Vince DiMartino during a break in the conference. (Photo by Ben Kleppinger)

Ideas abounded for downtown Danville at a “smart growth” conference hosted at Centre College over the weekend.

Among the numerous sessions that were part of Danville-Boyle County’s first ever such conference was one focused on “reimagining” the downtown space in Danville.

“I firmly believe … if this group leaves here believing this can be done and make a difference, it will happen,” said Madison Silvert, a Centre alum and president of the Malcolm Bryant Corporation, which recently invested in downtown Danville by purchasing the Hub building. “… I can remember when we did this exact same thing in Owensboro, December of 2007. Once we started actually implementing the change, the entire community believed that anything was possible.

“For the first time, they saw real government change and private-led change affect their quality of life. From that, came this belief that they could do just about anything and our economy has grown and grown as a result.”

What are the changes Silvert is talking about? They are different for each place, Silvert said, because cities cannot succeed in growing and improving quality of life in the world today by just copying someone else.

Danville can differentiate itself from other places by developing “authenticity of place,” he said. “It means figuring out what is unique to Danville and Boyle County, latching onto it and making it the best it can be.”

Silvert said in his home of Owensboro, the work they did to improve the city got results — it’s been a top market nationally for millennials to move to.

That’s accomplished through improving quality of life for local residents, he said. You don’t want to suffer from “brain drain” — young people leaving for bigger places or better jobs and never coming back. But a community also can benefit from its young adults gaining experience in other places.

“What you want is brain boomerangs — people who leave the community, learn something new, and then bring it back,” he said.

Silvert said talent and economic activity both “will follow quality places,” which is why it’s important to make downtown Danville more people-friendly than car-friendly, for example.

“The key is to be this region’s small-town center of gravity,” Silvert said. “There are people that want to be in a small town. But they can’t be in every small town. They’ve got to choose. What are the amenities that we are going to create in Danville, starting today with this discussion, that are going to make sure this is the kind of place where the brain boomerangs come back, where people want to live?”

Louis Johnson had some ideas about how Danville can accomplish those goals. Johnson is a landscape architect with Gresham Smith and a member of the team from Bravura that has been hired to complete a downtown master plan for the City of Danville.

Johnson said he likes a brief definition of “smart growth” provided by Ned Crankshaw, chair of the UK Department of Landscape Architecture: Smart growth is “more of what we love and less of what we don’t.”

The people who need to be involved in deciding what downtown should look like is “really diverse,” Johnson said — it includes city residents, students, businesses, county residents, farmers, migrant workers, tourists …

“Part of this story is how do we pull people in and make this the center of gravity?” he asked.

Johnson said one place in downtown Danville that’s already a good example is the Hub building. It has a coffee house, the Centre College bookstore and office space for other businesses, which means it features mixed uses that are a big part of smart growth.

As a result, the building is “a really interesting, active place.”

Downtown Danville would benefit if that atmosphere could be expanded beyond the boundaries of the Hub building, he said. 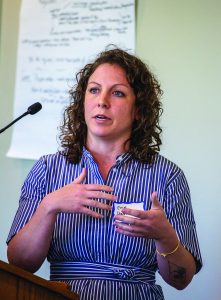 Erin Hathaway, another landscape architect working on Danville’s master plan, had some ideas for locals to ponder. For example, the southern end of Third Street isn’t particularly attractive; it also features a lot of on-street parking that often isn’t used because people prefer to park closer to downtown. Hathaway wondered if that area of Third Street could be modified to remove some of the underused parking spaces and make it more attractive and more friendly to pedestrians.

“Can we start thinking about streets for people rather than streets for cars?” she asked.

The distance between downtown Danville and the bypass area where a lot of businesses are located is only about two miles — that’s really a walkable distance for many people, if the infrastructure was there so it was an attractive idea and pedestrians could do it safely, Hathaway said.

“If you think about a young professional population, it’s possible they could live here without a car — if the infrastructure was here to make that work,” she said.

Hathaway said she wonders if the Art Center of the Bluegrass could develop ways for its content and programming to “filter out to the street,” so that tourists and people unfamiliar with it are more immediately drawn in.

And she said Danville has a great natural landscape to tap into in Clark’s Run — the stream that flows through south-central Danville. While parts of the stream feel “celebrated,” there are other areas that are “pushed aside.”

Attendees at the session were asked to write down answers to several questions and list their ideas for improving downtown.

In answer to the question, “What uses are missing?” one participant wrote, “Things to buy downtown that I need — not just tourist/accessory shops (groceries, kid stuff, etc.)”

On the question, “Can your streets be better public spaces?” one participant wrote that their concern is “safety at the intersection of Third and Main” and suggested installing a flashing light and having all cars stop so pedestrians can cross. Another participant wrote than “many sidewalks are broken and not safe” and they would like a “wider downtown pedestrian space.”

A Centre College student wrote, “Make downtown a place students want to go to! We want to be involved but downtown has insufficient hours/places to use! Pizza Pub/Harvey’s are getting there!”

One participant, P&Z Commissioner Vince DiMartino, said many successful small cities he has visited have “walking streets” — streets or sometimes single blocks that have been closed to vehicles and turned into walkable, usable space for people.

“It’s not to deter business at all; in fact, it’s the opposite,” DiMartino said.

Nikki Kinkade, director of the Art Center of the Bluegrass, said she agreed with DiMartino. She said her husband has been hit downtown while riding his bike and she has witnessed three people get hit by vehicles.

“For me, I have children who are now in college, but I wouldn’t let them walk downtown two blocks because of the cars and the safety aspect — not because I think they’re unsafe because of people but because of cars,” she said.

The idea of redesigning Danville to feature more people-friendly spaces rather than prioritizing traffic featured heavily in the discussion.

Johnson said right now, most of Danville’s public right-of-ways are dedicated to vehicular traffic. But Danville has a unique advantage over other cities in that it could successfully transform itself to be focused on foot and bike traffic.

Such a transformation would help everyone, but especially those with lower incomes, he said.

“You could be a place where people could live easily,” he said. “… An enormous part of affordability is transportation and how we pay for that — your car, your insurance, your gas, the upkeep. If you can be a city where people don’t have to own a car and can still live a respectable life while being on those streets that are so comfortable and have shade, that’s an easy way for a city to make a huge investment in a vulnerable population.”