On Oct. 10, Christine Missik and Sally Bright, with the Danville Chapter of Citizens Climate Lobby, presented quite a bit of interesting and hopeful information about the current status of dealing with climate change. 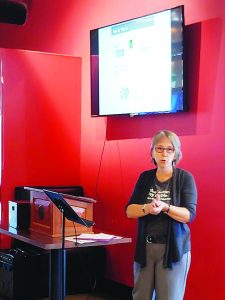 Citizens’ Climate Lobby is a non-partisan grassroots international organization with over 550 chapters worldwide, 400 of them in the U.S. CCL in Danville started in April, with about 50 members, Sallie Bright as the leader, and an active lobby team. CCL is laser-focused on achieving national bi-partisan Carbon Fee and Dividend legislation

Part of the important reference material was from a Jan. 17, 2019 Wall Street Journal article about economists’ statement on carbon dividends: the largest public statement of economists in history. The signatories included 3,508 U.S. economists, 27 Nobel Laureate economists, two former Secretaries of the U.S. Department of Treasury, four former Chairs of the Federal Reserve (all), and 15 former Chairs of the Council of Economic Advisors. The statement, in summary, showed five policy recommendation points that call for immediate national action.  The article can be found at www.wsj.com.

We learned that something quick and easy to do to support Carbon Fee & Dividend is called Project Grand Canyon, and it gives those who are interested in the information they need to call our District 2 House member, Brett Guthrie, to urge him to support HR 763, the Energy Innovation and Carbon Dividend Act.

The Act is a bi-partisan climate change solution in Congress right now. It would be effective by reducing America’s emissions by at least 40% in the first 12 years. It will be good for people by improving health and saving lives by reducing pollution that Americans breathe. It will be good for the economy by creating approximately 2.1 million new jobs. And it will be revenue-neutral, because the fees collected on carbon emissions will be allocated to all Americans to spend in any way they choose.

To sign up, go to projectgrandcanyon.com and you’ll be walked throughs the process. We were urged to pass that link on to friends, family, and anyone else who would be willing to take a few minutes each month to call – something which will really make a difference.

To get involved in the local Citizens Climate Lobby chapter, contact Sallie Bright at salliebright5@gmail.com, or go to CitizensClimateLobby.org and click “join,” which will enroll participants into the local chapter.

To learn more about the Energy Innovation and Carbon Dividend Act, visit EnergyInnovationsAct.org or cclusa.org/energy-innovation-act.  Further resources can be found via social media at twitter.com/citizensclimate and facebook.com/CitizensClimateLobby/.

For more information about Kiwanis Club of Danville, email KiwanisDanville@gmail.com and visit Kiwanis.org.