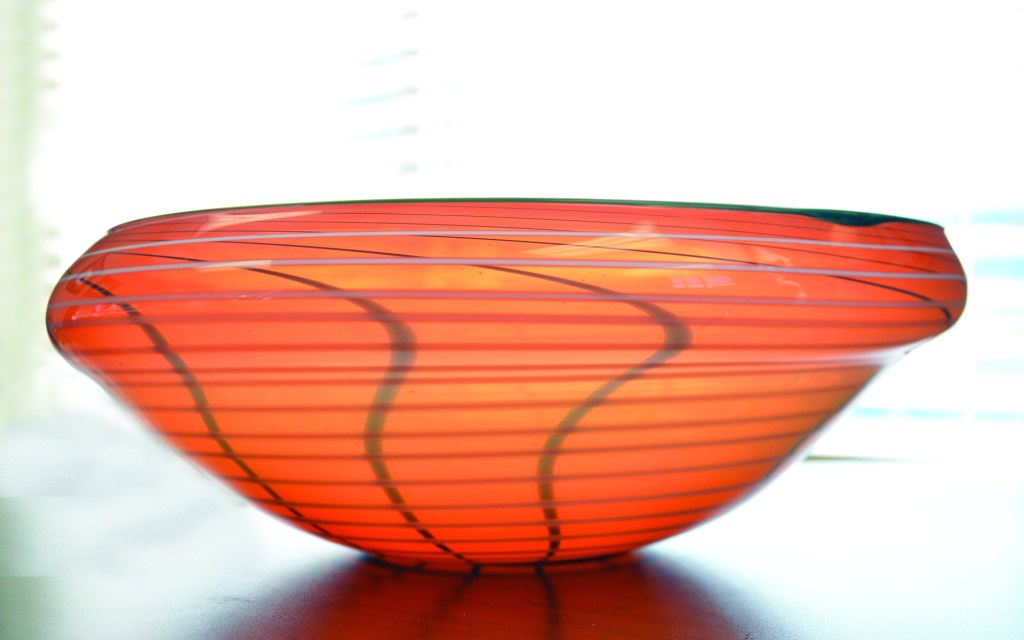 A large bowl with a white spiral swirl and graceful gray lines, signed and dated by the late Stephen Rolfe Powell in 1983, will be featured in the live auction at Heritage Hospice Inc.'s sixth annual Tea & Treasure fund-raiser on Nov. 16. (Photo by Robin Hart)

This year’s Heritage Hospice Inc. Tea & Treasure fund-raiser event will feature a hand-crafted glass bowl by the late artist and Centre College professor Stephen Rolfe Powell. It will be available for purchase during the live auction, along with three other special items from various artists, for the benefit of the special programs that Hospice provides for its clients. 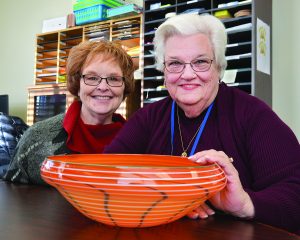 The annual Tea and Treasure is organized and hosted by Hospice volunteers, said Director of Volunteer Services Wendy Hellard. It was one of those volunteers, Jan St. Pierre, who had also worked at Centre and contacted Powell’s widow, Michelle, and asked if she wanted to continue Powell’s tradition of donating a piece for the Hospice Tea & Treasure auction.

“And she (Michelle) did,” said Hellard. “She was so gracious in doing that.” Michelle Powell even brought the piece to Danville for St. Pierre to pick up, Hellard said.

Stephen Rolfe Powell had given three other pieces over the years for the Hospice auction, Hellard said. She said the bowl donated this year is the largest piece the Powells have ever donated. It’s also signed and dated, from 1983, which was early in his glass career, Hellard said.

The price paid last year for a Powell glass piece was $550, she added. 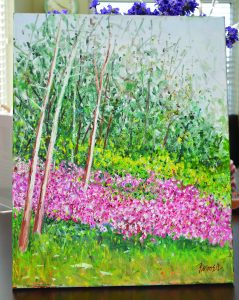 A painting by local artist David Farmer, titled “Spring” will be available to purchase during the live auction at the annual Heritage Hospice Tea & Treasure fund-raising event on Nov. 16.

Other special items to be sold during the live auction include a 16 x 20 canvas by local artist David Farmer of bright pastel-colored flowers in a field titled “Spring;” a scrimshaw horn created by Terry Goode and donated by David and Lea Ellen Walden; and a large, wooden wall hanging of an American Flag, donated by Veteran Woodworking of Madisonville.

Along with the live auction of art pieces and theme-inspired, extravagantly-decorated table tops loaded with merchandise, there will also be a silent auction, Hellard said.

The Tea and Treasure event will be held from noon to 3 p.m. on Saturday, Nov. 16 at Centenary United Methodist Church, 1441 Perryville Road. Tickets are $25 per person and must be purchased in advance. Only 185 tickets are sold for the benefit tea, and they are selling fast, Hellard said. Doors open at noon so event participants may browse all of the auction items. Tea and sweet and savory finger foods will be served at 1 p.m. The guest speaker will be WLEX TV personality Tobie Brown. 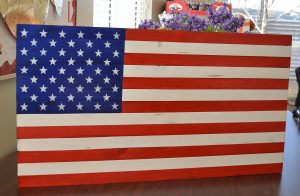 A large wooden wallhanging of the American Flag will be available during the live auction at Heritage Hospice Tea & Treasure on Nov. 16. 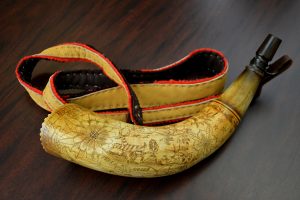 A scrimshaw horn is one of the special items being auctioned off during the annual Heritage Hospice Tea & Treasure event.