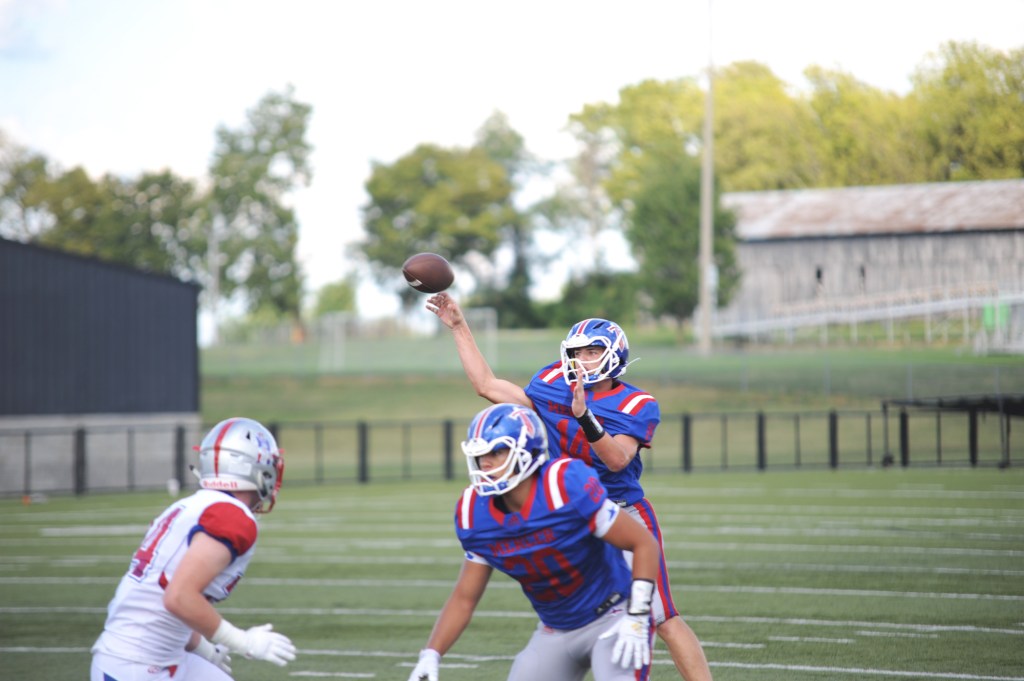 Kaelin Drakeford getting a block from fullback Peyton Owens during the win against Allen County-Scottsville. (Photo Derek Brightwell)

On September 27, Christian Academy of Louisville was still licking the wounds of a thrashing it took at the hands of Boyle County and looked poised to take out that frustration on district opponent Mercer County. In the week leading up to the game — which kicked off district play for the two teams — most people thought the perennial powerhouse would dominate the Titans.

Now it’s November and the first week of the playoffs and that win has added significance as it forces CAL to travel to Mercer to open the postseason.

“In this district, as tough as it is, it is a huge accomplishment for our kids and program,” Buchanan said about hosting the first round game. “Our community loves our kids and Titan football. To host a playoff game in November means alot to our town and fans.”

Buchanan said that he’s preparing to see a different Centurion team than the one they beat over a month ago. “Both teams are much better right now than they were in September and both teams know each other well. It will come down to guys blocking, tackling, and performing at a high level.”

The Titans will continue to lean on their well balanced run game. While Malachi Yulee leads the team in carries, yards and touchdowns (105-922-14), the next four behind him are only separated by 16 carries. Brayden Dunn has been the number two back and has performed well in the role. Averaging almost eight yards a carry, Dunn has also chipped in eight touchdowns. Quarterback Kaelin Drakeford has also proved to be a dual threat, with 299 yards on 59 carries and five scores. Behind them are Bryson Yeast (40-257-4) and Peyton Owens (43-172-1).

The Titan defense has also been one of the most stingy in the state. They have held opposing offenses to only 169 points, 927 rushing yards and 1,446 passing yards this year.

Mercer County (8-2), has been hovering around the middle of the top 10 since they broke into the rankings and currently sit at sixth in the AP top 10 and eighth in the critical RPI. But despite the statewide recognition, Buchanan said that he keeps the focus off of that and on the field.

The rankings are not something we talk about. We want to keep our team together and play football at a very high level,” he said.”That is our focus.”

Heading into the rematch on Friday, Buchanan and his Titans know that it’s winner take all, but still the head coach’s message about what it’ll take to win remains the same: “When we win special teams, turnovers, and big plays, we win 100 percent of our games. That is our objective and what we must accomplish to continue playing football.”