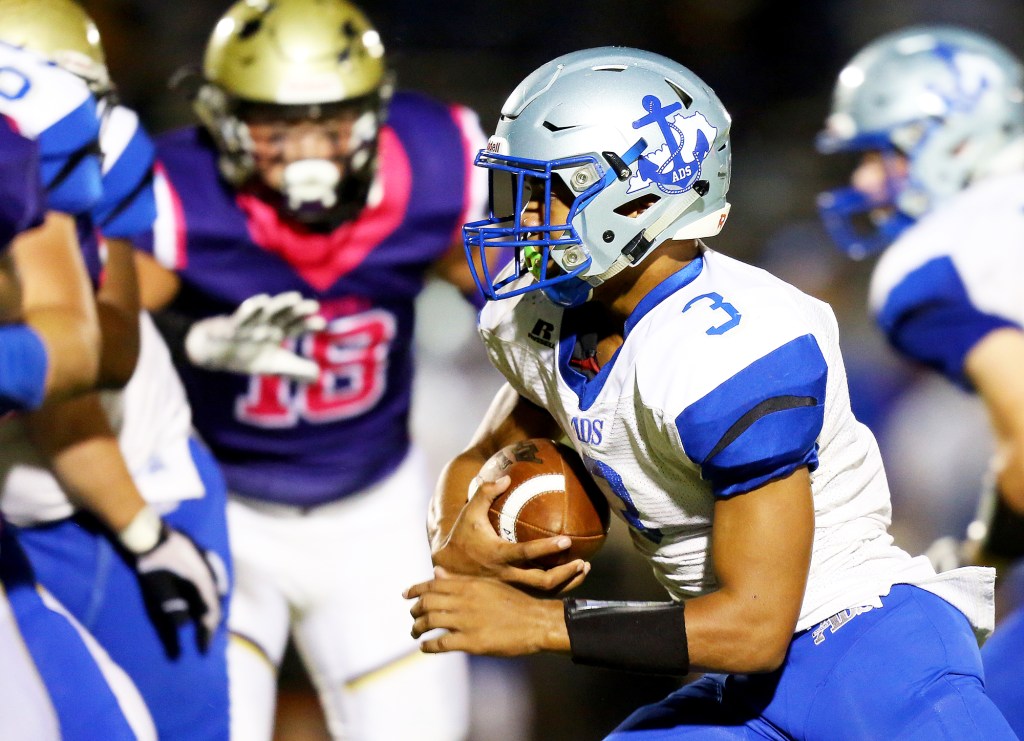 When Danville traveled to Somerset to open district play on October 11, a series of miscues led to the Briar Jumpers getting out to a 21-0 lead early in the game. After that, the Admirals were able to outscore their opponent 21-19, but couldn’t overcome the hole they’d dug.

“Once we settled into the game — granted we’re down 21-0 and they probably relaxed a bit — but we were still able to put together some good drives at that point and run the football,” Danville coach Clay Clevenger said. “That’s going to be important for us to have success tomorrow night. But you play four quarters. I know that’s obvious, but we need to go out and play with confidence.”

Senior Darrian Bell also knows that the Admirals can’t have a replay of the first matchup.

“It puts a lot of pressure on us to play to our potential and play with them throughout the whole game,” he said. “Part of that is coming out and playing like that at the beginning because if we do that, it’s a lot closer game and we’ve got a better chance of winning. Last time, we spotted them 21 points. If we don’t spot those points, we win 21-19. It’s all about getting off to a good start, playing good defense, taking care of the ball.”

While Clevenger doesn’t expect much to be different that it was four weeks ago, he does anticipate Somerset being more comfortable without star running back Alex Miller, who was injured the week before the first game.

“Quarterback (Kaiya Sheron) is still making a lot of plays for them. They still want to try to run the ball downhill as much as possible. They’ve just got a little bit different personnel,” he said. “Maybe they have a little bit better feel for what they want to try to do — we played them the first game coming out of his injury. I think they’ve settled in with what they’re trying to do and trying to be on offense.”

Sheron, particularly, presents a big challenge for Danville. His ability to create big plays when the designed play falls apart is one thing that is difficult to prepare for, and the first thing Clevenger wants to take away.

“Trying to keep him in (the pocket) is important. In our first game, if you take our turnovers away early, he still always had a response,” he said. “When we’d score, he’d always respond and make plans for them. A lot of the time it was in broken plays where he was able to rush and get a first down or he was able to throw the ball over our heads on a couple of occasions for a touchdown.

“He’s a dynamic player. He’s got good height and length and a strong arm. We’ve got to be able to go and give him some different looks and try to get some pressure on him.”

“Last game, he’d be able to run around the pocket and could throw from one side of the field to the other,” senior Eli Tibbles agreed. “It just messes up the whole defense when the play breaks down because he’s so elusive and is just a playmaker. We need to be able to contain him and not let him get out of the pocket.”

Defensively, it’s the Briar Jumpers’ multiple looks that concerns Clevenger — who believes that side of the ball is their strongest element. He says that the biggest key is making midgame adjustments to counter what Somerset is throwing at them.

Somerset’s lone district loss came to top seed Lexington Christian Academy when the Eagles went for a 2-point conversion to get the win. The following week, the Admirals got LCA and in breaking down the film, Clevenger believes it might have been the worst Somerset looked all year, despite the narrow margin.

One benefit Danville will have is the two weeks they’ve been able to prepare. The Admirals had their off week during the last week of the season, and for a team who’s been plagued by injuries, it couldn’t have come at a better time.

“It’s kind of been one of those years where we’ve battled the injury bug a little bit,” Clevenger said. “Right now, we’re the healthiest we’ve been so hopefully that helps us.”

As has been the case all year, coach Clevenger has preached consistency and getting off to a good start to his team. This week is no different, except he has the case study in the previous Somerset game to point to.

“For our kids, we just hope that we can go and put it together. We haven’t done it this year — we’re just waiting on that light bulb to click,” he said. “We’ve done it at different times but not in the collective manner with the consistency we need. There’s no time like the present. Obviously if you don’t click now you go home.”

“This is win or go home,” Tibbles added. “Next game isn’t guaranteed so we need to go out and give it all we got. That’s just been my mindset.”