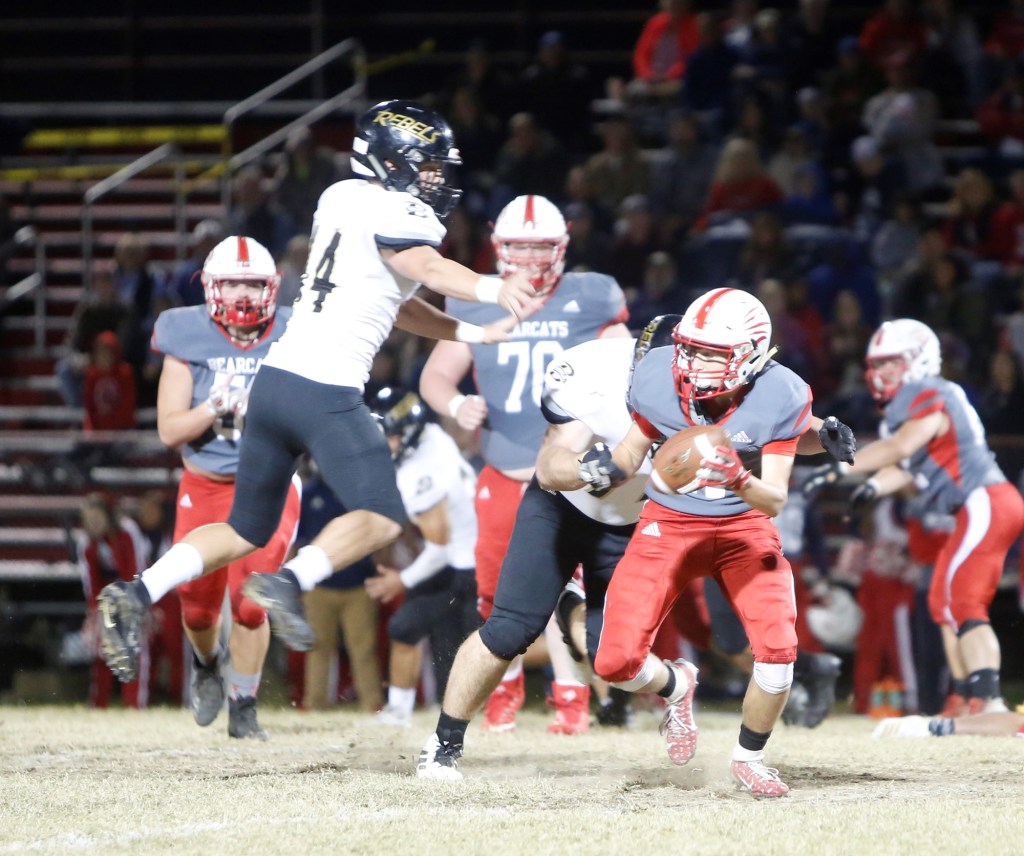 When the Rebels traveled to Anderson County in October, the Bearcats got out to a 7-3 lead before Boyle scored 49 unanswered points to run the clock and get the win.

Coach Chuck Smith isn’t relaxing on the merits of that win heading into the win or go home game on Friday, but does admit that he’s not sure how much different the two teams are from three weeks ago.

“Everybody does what they do and are good at what they do. That’s what you work all year for is to be good at what you do,” he said. “We’ll get their best shot and they’ll get ours. That’s the way it should be this time of year, but I don’t think there will be too many tweeks.”

What Anderson County is good at doing is running the ball. The lone touchdown they put on the Boyle defense was a 70-yard sprint from Zach Labhart, the team’s leading rusher with 930 yards on 151 carries. The Bearcats also get contributions from quarterback Jagger Gillis on the ground, as he has seven touchdowns rushing — matching his passing TD total.

For Boyle, it’d be easier to say what they don’t do well. With 506 points (50.6 per game), Boyle is the highest scoring offense in the state across all classes and defensively, the Rebels have only allowed 97 points across 10 games, the eighth best mark in the state, and best in Class 4A. All of that means that Boyle County ranks third in the state in scoring margin, with a difference of 409 points total (40.9 per game).

Individually, the Rebels have four players in the top 30 of points in Class 4A. The list features the usual suspects of Reese Smith and Landen Bartleson but also boasts junior running back Will McDaniel and sophomore kicker Jackson Smith.

McDaniel has 11 rushing scores and one receiving TD to go along with Bartleson’s 10 rushing TDs. Reese Smith has 14 receiving touchdowns and has taken three of his five carries to the house. Jackson Smith leads the state in extra points with 61 and ranks fourth statewide with seven field goals (best in 4A). He’s also never failed to put a ball through the uprights this season.

Quarterback Reed Lanter currently ranks 18th in the state (fifth in a quarterback dominant 4A) in passing yards per game with 2,141 yards in 10 games. He’s also carrying an impressive 26-2 touchdown to interception ratio.

Lanter may be without his favorite target for at least the first round, however. Reese Smith’s ankle injury against Bourbon County limited him to only two plays in the win over Madison Southern last week. Coach Smith says that his star receiver will be a gametime decision, but has faith in the other players to step up if the West Virginia commit can’t go.

Even though calling Boyle “a good team” would be an understatement based on the year, coach Smith has still been preaching only one thing this week.

“The focus is we have to get better,” he said matter of factly. “I’m concerned because the last couple of weeks we didn’t make the progress that I wanted us to make. We have to make up some ground in that area this week and work on getting better.”

Still, the Rebels enter the playoffs as the top RPI team in the class, which means that the road to Kroger Field will go through Rebel Stadium.

“That’s what these kids have worked so hard for. It was a different structure this year and we wanted to make sure we controlled our own destiny in terms of having home field advantage,” coach Smith said. “The guys worked hard and prepared for every game. They were able to win every game. But that doesn’t guarantee us anything other than it’s nice we get to stay home.”

One thing is clear, however, from talking to coach Smith and watching the Rebels practice, this is the part of the year that everything has been building toward and they cannot wait to get on the field Friday night.

“This is what you play for. It’s what you play the game for, to be in a situation like the playoffs — single elimination, all that pressure,” coach Smith said. “That’s the excitement of it. That’s the fun of it. I think that’s what all competitors, people who really like to compete — this is their favorite part of the year.

“It could be a five week run or it could be a one week run. We’ve just got to be the best we can be every single day.”