A Danville soldier was among the thousands of Kentuckians who fought in World War II and returned home in 1946 at the end of the longest war fought by American soldiers. 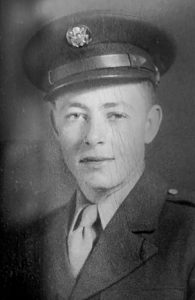 Corporal Andrew “Marshall” Bryant Sr. was inducted in the Army on Nov. 3, 1943, in Louisville, and began active duty on Nov. 24.

He arrived in the Philippines on Sept. 5, 1944, and spent two years and three months in battle.

He returned to the states Feb. 5, 1946, and was honorably discharged Feb. 14, 1946, from the U.S. Army at the Separation Center at Camp Atterbury in Indiana.

He and several others from Boyle County arrived home at the same time, according to an article in The Advocate-Messenger archives. They were Sgt. John M. Nichols, T-4 Joseph Young, Sgt. Robert K. Tarkington, T-5 Lawrence Ford, all of Danville; and Sgt. James Baldock of Junction City and T-4 William P. Carpenter of Perryville. 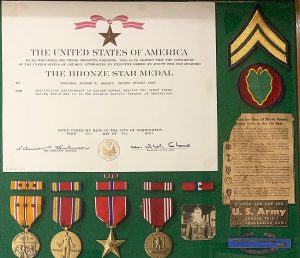 Bryant received several medals for his service: One was a Bronze Star Medal on May 2, 1991, for “meritorious achievement in ground combat against the enemy during World War II in the Asiatic Pacific Theater of Operations.”

He also got an Asiatic Pacific Medal with two battle stars; a Victory Medal for serving in active duty during 1941-1946; and a Good Conduct Medal for exemplary behavior, efficiency, and fidelity in active federal military service. He also got a service star.

Bryant was one of the lucky ones who survived the battles and made his way back to Danville. After his discharge he returned to his normal life. He got married, went to work and raised a family. He never talked about his war experiences.

He and Etta Florence Edwards (1923-2010) were married soon after he returned. She was a daughter of Roy and Nora Edwards of Boyle County.

Bryant worked as a driver for Glore Oil Company and was a concrete finisher and bridge carpenter on road construction. He was a Baptist and Mason.

Andy and Danny served in the Army during the Vietnam War, where each was wounded.

Marshall was 88 years old when he died March 10, 2014. He and Etta are buried in Bellevue Cemetery.

Sometime after he returned home, his parents, Raymond and Margaret Burton Bryant of Danville, received a 438-page book ‘Patriots of Kentucky-World War II” that listed many soldiers, including their son.

Three generations of the Bryant family have kept the rare book for more than 70 years.

A photo and brief information list Bryant as 19 years old when he enlisted, where he was stationed, and that he attended Maple Avenue School and belonged to the Church of God, along with his parents.

The Bryant family apparently got the book through the mail and the younger Bryants know little about it.

“The book apparently was planned initially as a listing of Kentucky casualties from the war,” according to the Kentucky National Guard. It was expanded later as families began sending the publishers information about living war veterans.

The servicemen are listed by county.

The book was dedicated to all those who died for their country.

“The Bivouac of the Dead,” a poem by Danville Poet Theodore O’Hara is near the front of the book.