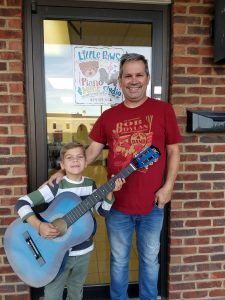 Gavin Feltenbarger, pictured with his guitar instructor Jeffrey Hogue, was the first-place winner of a national guitar contest offered by The Childbloom Co. Although Gavin, 7, began playing on his own at around 2 years old, he didn’t begin taking lessons until April of this year with Little Paws Piano and Music Studio in Danville. His grammy, Robin Feltenbarger, said Hogue has made amazing strides with Gavin, and they feel like the instructor is one of the reasons he won the contest; Hogue is director of guitar for Little Paws. Gavin won the Step One contest offered through the company by entering a video of himself playing; in a letter from Childbloom, the company said his entry “was really precise, and we loved hearing it! I hope you continue to play. You have a very musical future ahead of you.” Gavin is a student at Toliver Elementary School, and his grammy says he is now teaching himself how to play the piano. “I really feel like he has a bright future in store for him with music; he’s a natural,” he said.