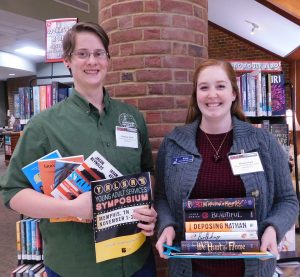 Librarians Brittany Smith and Kinsey Hisle show off some of the YA books they received at the YALSA conference. (Submitted photo)

Professionally certified library staff are required to complete continuing education training every year. Conferences at the state levels are often attended as opportunities to network with other libraries and hear about new ideas, issues and trends. National conferences through the American Library Association and Public Library Association, among others, are often held too far away to attend.

The symposium is open for anyone to attend, and sessions cover topics related to serving young adults in libraries, primarily 13-18 year olds. More than 600 attended this year’s event, setting a new record in the symposium’s history.

The theme was “Show Up and Advocate: Supporting Teens in the Face of Adversity.” Some of the topics of the themes were: “As advocates for teens, how do we show our support and push for social change in our communities? How does access to library resources, services, and activities help teens overcome adversity in their lives? How do staff create more inclusive and welcoming teen spaces where adolescents are free to express themselves, learn, and grow? What literature do we promote and what programming do we offer to engage teens and encourage them to take leadership roles in their communities?”

Hisle and Smith use YALSA’s resources year round, but getting a chance to go to the annual conference was a rare opportunity; Hisle said they were ready to go as soon as they knew this year’s event was within driving distance.

“It is a great opportunity to meet and hear from a variety of librarians who bring different perspectives. It is also really special to attend an entire conference specifically about serving our younger patrons and the unique issues that come with that. Every session offered was relevant and helpful to the work that we do here. Every librarian we met at YALSA worked with young adults and cared about serving them like we do.”

“Being able to learn from others who are doing this work well is an amazing opportunity, not to mention the remarkable number of young adult books that we receive throughout the weekend,” Smith said. Each librarian left Memphis with two armloads of YA (young adult) books, many signed by the authors who wrote them, to get to know more about what teens are reading and interested in.

The event began with an opening session titled “Real YA” with a panel of four YA authors discussing how realistic stories accurately portray the lives of today’s teens and why adolescents need advocates. Saturday was a full day with six hours of sessions led by librarians and authors from around the country, followed by a Book Blitz in the evening to meet authors.

Hisle and Smith attended several informational sessions led by librarians and professional experts. Hisle attended sessions on topics including daily teen programming, building cultural competencies, and increasing teen resilience through trauma sensitive approaches. “The sessions I attended were all themed around how we can support teens in our community and provide them with what resources and support systems they need to succeed,” said Hisle.

Smith attended sessions on topics including Zines, using nonfiction to inform teens on current issues, and how to incorporate emotional learning in programming. “One of the important components of programming for youth is developing emotional literacy and soft skills, such as communication,” said Smith. “In one session, I learned how to incorporate talking circles with teens to help build empathy both within the individual as well as across the room with their peers.”

During the entire three days, Hisle and Smith had the opportunity to meet and talk to librarians from all over the country, including those who work in middle and high schools, higher education and prisons.

The closing session on Sunday afternoon was titled “Empowering Teens through Fantasy and Science Fiction” with a panel of four YA authors discussing “how YA science fiction and fantasy can inspire teens to advocate in a chaotic world,” according to the program. Following this final session, Hisle and Smith met with authors and spent more time with other librarians they met that weekend discussing what they all learned and hoped to bring back to their libraries.

“I personally want to be more intentional with my programming to make sure it is not only a safe, fun environment for young patrons, but also a place where we practice social and life skills … that are beneficial to them,” Hisle said. She said learning from others on how they solved teen issues was invaluable.

Hisle and Smith left not just with ideas on improving library services, but also with renewed affirmation in the work they do.

Hisle and Smith are happy to relay the information to community members who are interested about what they learned. To contact: khisle@boylepublib.org; bsmith@boylepublib.org. More information about tween and teen programs and other upcoming events can be found atBoylePubLib.org or by calling (859) 238-7323.