This weekend began rather chaotically for local law enforcement, with a “perfect storm” of calls all coming in at the same time Friday morning. In the span of a few hours, Danville Police worked two different injury accidents on city roads before they were pulled into a hot pursuit of a suicidal person who had allegedly made threats toward a school, and was reportedly packing a pistol and knife.

The man, Christian Persico, 24, was eventually apprehended and arrested without anyone being injured, but only after local schools were put on lockdown while officers pursued him throughout the area on foot.

It was close to noon Friday before Asst. Chief Glenn Doan was able to sit down and put together the details from the morning incident. It all began when family members contacted police for a welfare check on Persico, relaying that he was somewhere on the 100 block of Waveland Avenue.

“He’d made some threats of self-harm and suicide by cop — meaning that he would force police to use deadly force on him.” And reports indicated he could be armed, Doan said. 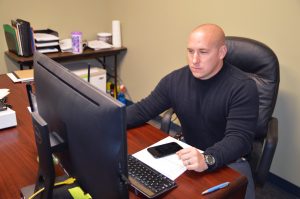 Asst. Chief Glenn Doan is finaly able to sit at his desk by almost noon Friday after a chaotic morning of multiple calls. The shift was stretched thin all morning, as units worked two injury wrecks and had two different reports of suicidal men in the Danville area.

There were also reports that Persico had made “kind of a vague threat to a local school,” Doan said. Schools were notified and put on lockdown immediately.

“Area schools were all notified what we were doing, what we were looking for, in order to be placed on notice,” he said.

“So we began walking the area, driving the area; (we) searched for probably just over an hour,” Doan said.

The man was eventually tracked down at Taco Bell on Hustonville Road at around 10:30 a.m. “He was inside sitting there, and when officers walked in, he saw them and he stood up and started causing a disturbance, showing some aggressive signs” toward officers, Doan said.

Officers were able to physically take him to the ground and into custody, placing him under arrest. Persico was not armed at the time of his arrest, he said.

Police are still gathering information on how explicit the threat was toward a school, “and what all it included, but we’re looking at second-degree terroristic threatening, as far as him making those utterances about the school,” Doan said. Friday afternoon, it was still unclear if the threat was against a specific school by name.

“They’re still interviewing some of the family members right now to see if it was just overall schools, or a school he was the closest to … But we think we’ve gathered enough to put the terroristic threatening on, but we’re still trying to make that charge a little stronger now,” he said.

Persico was lodged in the Boyle County Detention Center and charged with one count each of second-degree and third-degree terroristic threatening; second-degree disorderly conduct; resisting arrest; public intoxication with a controlled substance, excluding alcohol; menacing; and three outstanding warrants. As of deadline, no bond had been set yet, pending pretrial. No photo of Persico was available.

Doan said Danville officers were assisted at the scene by Boyle County Sheriff’s deputies, as well as Kentucky State Police.

Doan said that to his knowledge, the school lockdown procedures went smoothly. “School resource officers (SROs) for Boyle and Danville were on scene, helping with that aspect.”

And as the word got out, Chief Tony Gray said there was the usual influx of phone calls to the PD from worried parents, trying to figure out what the lockdown was about.

Mike LaFavers, Boyle County Schools superintendent, said he got a call from SRO Ricky Sellers Friday morning, who briefed him on the situation.

LaFavers then asked District Safety Officer Chris Holderman to communicate the information to all the campus schools. “We remained on soft lockdown until the person in question had been apprehended.”

He explained that a soft lockdown is essentially where schools continue going about their normal business as teachers and students, “but we do make a few adjustments within the building.” LaFavers said during a soft lockdown, visitors are more closely monitored, students are restricted from going outside of the school and “we step up exit supervision.”

Danville Independent Schools Superintendent Tammy McDonald said, “All Danville Schools were either in ‘shelter in place’ or lockdown status for a portion of the morning.”

She said the schools and district staff jumped into immediate action, “and, as always, did a great job in protecting our students while minimizing activity so the day felt as normal as possible.”

McDonald said Danville’s SROs, Charlie Parks and Ben Ray, along with Safety Coordinator Ed McKinney worked closely with police during the situation. “We are very thankful to the Danville Police for their quick response. Safety is always our No. 1 priority …” and the system is thankful to have a “great partnership” with local law enforcement.

Doan said while Danville Police and other agencies were scouring the area on foot for Persico, they also had to work two minor injury accidents — one at the Fourth and Walnut intersection, as well as one at Walnut and Third.

“Nothing major … but just stuff that was very time-consuming,” Doan said. There was also a BOLO (be on the lookout for someone) from Junction City for another suicidal man authorities thought may have made his way into Danville. Junction City Police Chief Preston Russell was not able to be reached by deadline for an update.

All the while, Doan and Gray said besides themselves, there were four other officers on duty Friday.

“Deputies did help too, but we may have something big happening but their calls don’t stop while that’s going on. It can get really hectic,” Doan said.

He said the two agencies help each other as much as possible, “but there’s a lot of times they can’t rely on us, and we can’t rely on them because we’ve got so much going on we’re having to take care of; makes it difficult.”

Doan said for the day’s events, the PD really needed at least eight officers on duty. Chief Gray said the department is “fairly fully staffed,” but they are seeing the severity of calls increase.

“The overall calls are climbing, but more importantly, the number of two- and three-person calls are increasing,” Gray said, meaning those requiring more than one unit on the scene.