Ads hang tight, but can’t hang on against Somerset 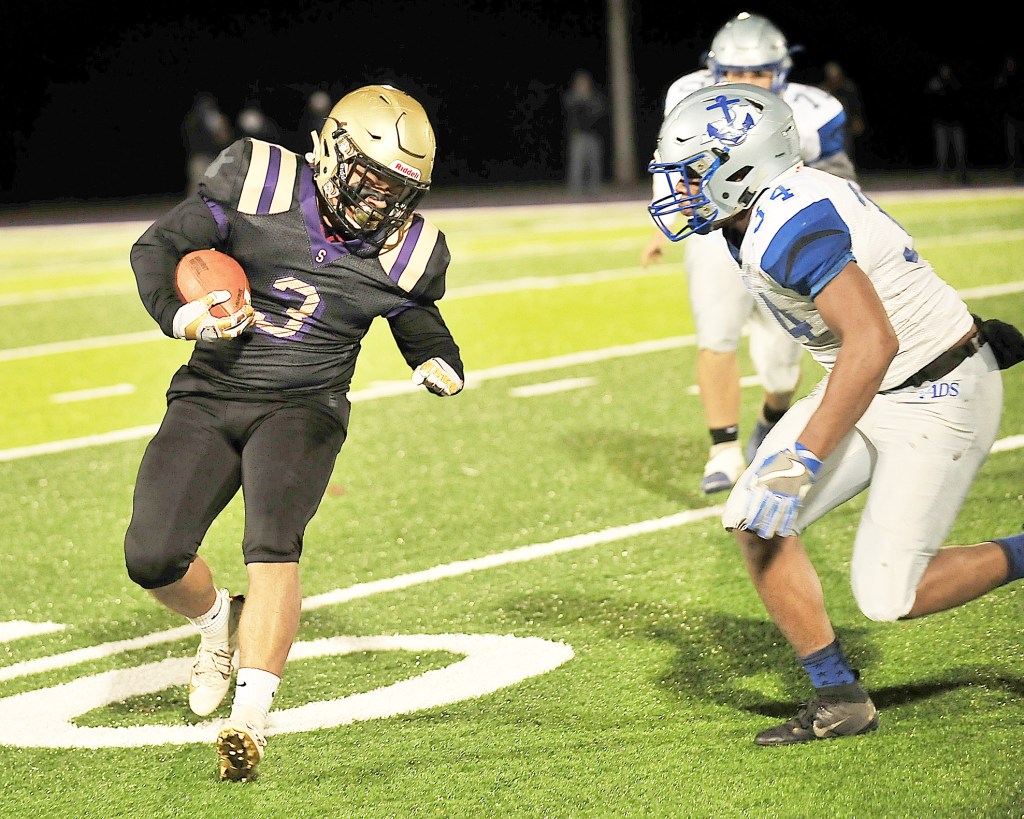 Darrian Bell goes in for a tackle on Somerset's Cam Austin. Bell would record his 400th tackle of his career Friday night. (Photo Steve Cornelius)

After a close start, the Somerset Briar Jumpers football team got stronger as the game went on and pulled away from their district rivals, the Danville Admirals, to obtain a 34-14 victory in the first round of the Kentucky state 2A playoffs bracket.

The Jumpers received the opening kickoff and moved it down field with a combination of carries between their quarterback Kaiya Sheron, and runners Cam Austin and Jerrod Smith.

Already deep in Admiral territory, Sheron connected with tight end Carson Guthrie for 17-yards to move the Jumpers inside the Danville 3-yard line.

After two near touchdown carries, Austin punched it in from a yard out on third and goal. A successful point after attempt by Christian Whitis put Somerset up 7-0 with just under seven minutes left in the first period.

Later in the period, Somerset was at the goal line again, but the Admiral defense stood strong and held them on a fourth and one play from the Danville four-yard line. This turned the ball over on downs with the Admirals starting from their own 13-yard line.

The Jumpers defense were looking from another stop but on third and nine yards to go from the Admiral 14-yard line, Sage Dawson hit Darrian Bell in stride, Bell shrugged off an attempted tackle, took it all the way to the endzone for an 86-yard touchdown, and helped Danville even up the score with under a minute to go in the first. On the defensive end, Bell would achieve a career milestone with his 400th tackle as an Admiral. 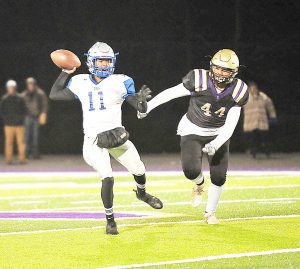 Later in the second period after a stop by the Jumper defense, Sheron found a wide-open Austin down the middle of the field for an explosive 49-yard score and re-established their lead with just over nine minutes left to play in the second quarter.

A few minutes later, the Admirals lost the ball and Somerset linebacker Cale Todd scooped it up to put the ball back in the hands of the Jumpers offense at the Danville 16-yard line.

The Jumpers pushed it closer to the endzone with ease, and Mikey Garland finished off the short drive with a 1-yard touchdown to put Somerset up 21-7 with just over five minutes left before the halftime break.

Just before halftime, the Briar Jumpers drove it deep into Admiral territory again. After a false start, Somerset had one last scoring opportunity at first and goal from the Danville 12-yard line. However, the Admiral defense forced four straight incompletions to close out the half with the Jumpers leading 21-7.

Both defenses ruled the third quarter and held the offenses scoreless. The Jumpers got a pair of stops, and the Admirals got a turnover from Corydon Crawford who intercepted Sheron midway through the quarter.

Although the third period was held scoreless, we did not have to wait long for a score in the final quarter. On the first play of the quarter, Sheron connected with Guthrie who made a defender miss and scored a 23-yard touchdown to help further extend the Jumper lead to 28-7.

Danville showed some fight and pounded the rock down the field through a successful ground game. Running back Caleb Burns finished off their drive and helped the Admirals cut into the Somerset lead when he broke a pair of tackles to score from fifteen yards out.

Smith sealed the deal for the Jumpers when he broke through a pack of Danville defenders and busted off a 33-yard touchdown to give Somerset a 34-14 lead late in the final quarter.

Time quickly ran down and the Briar Jumpers emerged victorious to advance in the playoffs and send home the Danville Admirals.

The win advanced Somerset to the second round of the playoffs where they will meet up with the number one ranked Lexington Christian Eagles, another district rival. The Jumpers will have to travel to Lexington next Friday where the look to avenge their only loss of their season and further advance in the Kentucky state 2A playoffs.