Boyle dominates in first round to set up LexCath rematch 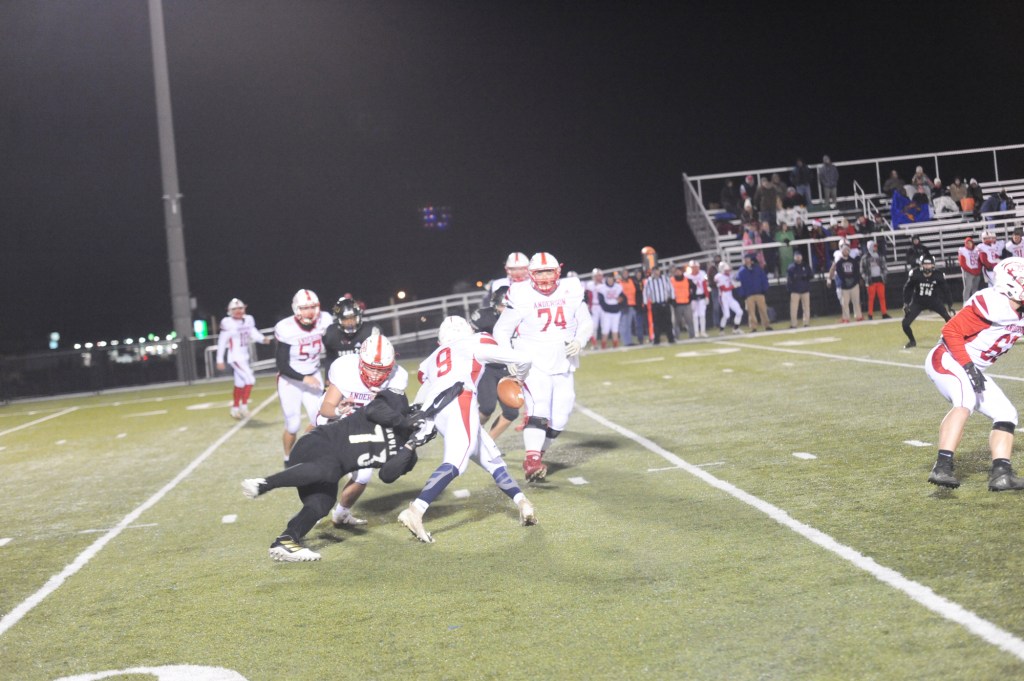 Boyle County played as complete a game as you could ask for Friday night to advance to the second round of the state playoffs with a 64-14 rout of Anderson County.

“I thought we did a really nice job of preparing for the job and then coming out and starting fast,” Rebel coach Chuck Smith said about his team’s performance. “When we play fast, we’re a pretty good team.”

That fast start came just over a minute into the game. After the defense forced a three and out on the Bearcats’ first possession, quarterback Reed Lanter threw a lateral to Reiley Colwick who chucked it down field into the arms of Luke Sheperson for a 45 yard touchdown. The play mirrored one the Rebels used earlier in the season to start the game against Danville with Reese Smith throwing the pass. 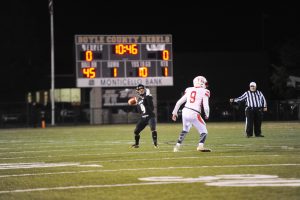 “Reiley threw a really nice ball. Luke had to turn around to catch it, but he’s athletic enough that he can do that,” coach Smith said. “It really set the tone right away and gave us momentum right away… We got a lot of guys who are good players. We just have to figure out a way to get them all the ball.”

The next three drives followed the same trend, with the Bearcats only picking up three first downs in the first quarter, and the Rebels only running seven plays in the period — and scoring four times.

The Rebels longest drive of the period was a four play, 56 yard drive that was all Andrew Sacco. It looked like Sacco would give Boyle two scores on as many plays when he went 51 yards but got tripped up at the 5-yard line. After that, it took three tries for him to get in the end zone for the 14-0 lead after the Jackson Smith PAT.

The next two Rebel drives were one play affairs. Lanter completed his first TD pass of the game to Landen Bartleson that went for 46 yards. And Will McDaniel sprinted 17 yards for his second score of the game to make the lead 28-0 before the teams even switched sides. 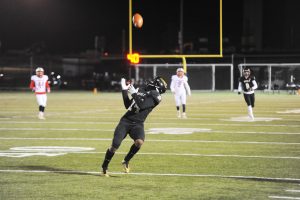 The Bearcats got some life to start the second quarter when the ball was snapped over Lanter’s head on the first play of Boyle’s first drive. Darian Dearinger recovered it on the Rebels’ 17-yard line. After a delay of game penalty and a time out, Anderson finally got on the board with a 22 yard touchdown pass from Jagger Gillis to Austin Beasley.

After that, it was all Rebels again.

Lanter connected with Colwick for a 35 yard TD after a 15-yard McDaniel run to push it back to a 28 point lead, and then Bartleson rushed 17 yards to the right for a touchdown. After Lanter completed the pass to Cameron Yates for the 2-point conversion, the running clock started, but the Rebels weren’t done scoring.

The longest drive of the night for Boyle came to close out the second half. Eight plays and three minutes is all it took and it concluded with a 10-yard touchdown pass to Colwick for the second time to make the lead 50-7.

Lanter would finish the game with 152 yards on 7-10 passing with three touchdowns. Colwick was the leading TD receiver with his two, while Bartleson’s one 46 yard catch was the team high in yards. Sheperson and Colwick tied for second with 45. Cole Lanter had 32 yards on a team high three receptions.

Sacco was the leading rusher with 73 on six carries.

While the offensive output was eye popping, it was the Rebel defense that was the truly dominant force in the first half.

Despite a time of possession difference of +7 in favor of the Bearcats, the Rebels outgained the opposition 294 yards to 28 through two quarters. Boyle also had five first half sacks for 35 yards lost.

“I thought our defense did a really nice job,” Smith said. “They always do something different every time we play them so it took us a little bit to get adjusted to it, but once we did we were only on top of it.” 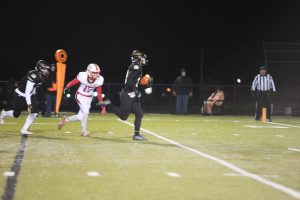 Will McDaniel sprints through a massive hole for a 17-yard TD in Friday night’s win over Anderson County. (Photo Derek Brightwell)

Two of those sacks came from senior Wilson Kelly, who also assisted on two other tackles for losses.

“He’s been a beast all year long,” Smith said about his senior lineman. “He was double teamed most of them time, but when he gets double teamed, he just works hard. He never accepts being blocked. He just sticks out.”

With the starters out and the clock running, the second half was a formality, but the Rebels kept their foot on the gas. The opening drive of the half was dominated by Jacob Graves who rushed for 54 yards on the drive, including a 29 yard burst. He capped it off with an 8-yard TD run to push the lead to 50.

The Bearcats showed some life late with a 10-play 72-yard drive that ended with a Sam Herrod 10-yard touchdown run. But the ensuing onside kick bounced right into a standing Coleman Clark’s hands and he raced 48 yards through a broken return team for a touchdown. The extra point was eventful, as Jackson Smith missed the first attempt, but a personal foul was called on Anderson County and Smith made the second attempt to keep his perfect season alive.

The Bearcats’ season ends with a 4-7 record. Boyle County (11-0), will get Lexington Catholic (7-3) next week after the Knights dispatched of Bourbon County 43-23. The last time the two teams met, Boyle put up a 64-28 victory over the Beau Allen led team. This time, coach Smith is expecting a closer game.

As the Rebels are the top seed overall in Class 4A, they will be hosting as long as they’re playing.