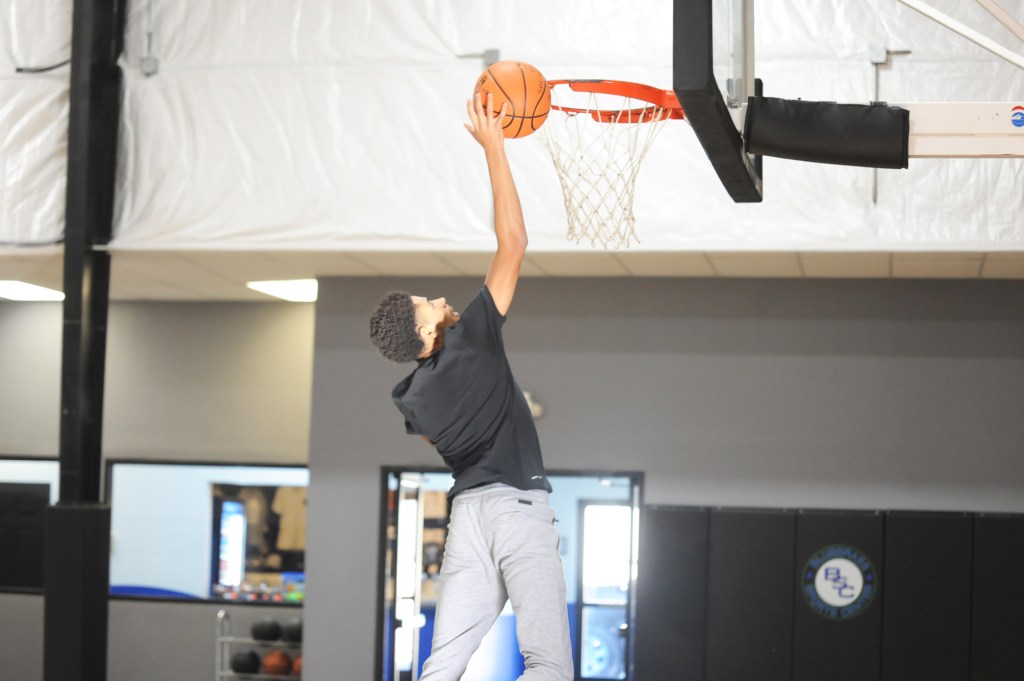 Caden Hill goes up for a dunk while taking advantage of the basketball courts at Bluegrass Sports Center. (Photo Derek Brightwell)

As the unseasonably warm weather that stayed throughout much of the fall turns into unseasonably cold weather creeping into mid-November, people wanting to get a pick-up basketball game in or take some cuts at a batting cage will be in luck when the Bluegrass Sports Center opens its doors on Saturday, Nov. 16.

From 3-6 p.m., owners Joe and Ashley Welsey will welcome patrons with free food and drink for the long-awaited grand opening of the project they’ve been working on throughout the year.

“I think I’ll be relieved more than nervous,” Joe Wesley said about the opening

The Wesleys wanted to create an environment where people in the community can come to shoot hoops, play soccer, practice baseball or just hang out at the arcade and be safe and beat the cold in the winter and the heat in the summer.

“Being a spot for your teenagers and young adults to have a place to come in and shoot basketball and hang out with their friends and play arcade,” Wesley said about what he hopes to see his business turn into.

“I think it’s a great place,” local parent Troy Burdette said while his son played basketball. “It’ll be a great place for the community and for everyone to come out and have a great time.”

Late in October, and running up until the grand opening, BSC has been operating under a “soft opening” to give people a chance to see what it has to offer, and have already hosted two birthday parties during that run.

“It’s been a decent turnout. We haven’t advertised a whole lot, so the turnout has been good,” Wesley said. “We’ve had some teenagers, some young adults just out of high school and college playing basketball and baseball. They’ve had a blast.”

In addition to the public, several coaches have also approached owner Joe Wesley about using the indoor courts, turf field and state of the art batting cages for practices and leagues.

“I need to reach out to some more. We’ve been approached by several coaches,” Wesley said. “The Storm soccer — different organizations. We can handle basketball, we can handle soccer, baseball and we’d like to different sports. 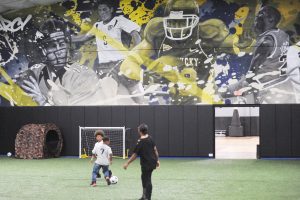 “We’ve also been booked out for some volleyball teams — one is for 16 weeks,” he added. “Being a consistent place where they can come in that’s warm and dry. Hopefully we’ll be a reliable source for them to improve their game.”

One coach that has already agreed on a partnership with the Wesleys is Danville baseball coach Paul Morse, who’s going to help in the utilization of HitTrax in the Bluegrass Sports Center’s batting cages. The HitTrax offers real time evaluation of a player’s swing and contact and can be used to compare to other players around the world, and even allows for competitions between opposing teams.

While it hasn’t been open to the public for long, Wesley said that they are already getting good reviews from the people who’ve been able to come by during its soft opening.

“Everybody’s been super impressed,” he said. “We tried really hard to make it as nice as possible — quality equipment. A lot of people have been impressed which makes me smile.”

While the focus lately has been on getting it ready to open, Joe Wesley has already started thinking about other things they could offer in the future, including wiffle ball leagues and adult dodgeball leagues. “We want to have something that’s entertainment for all ages.”

You can find Bluegrass Sports Center behind the Danville Cinemas 8 on Ben Ali Drive. Doors open at 3 p.m. on Saturday, Nov. 16.