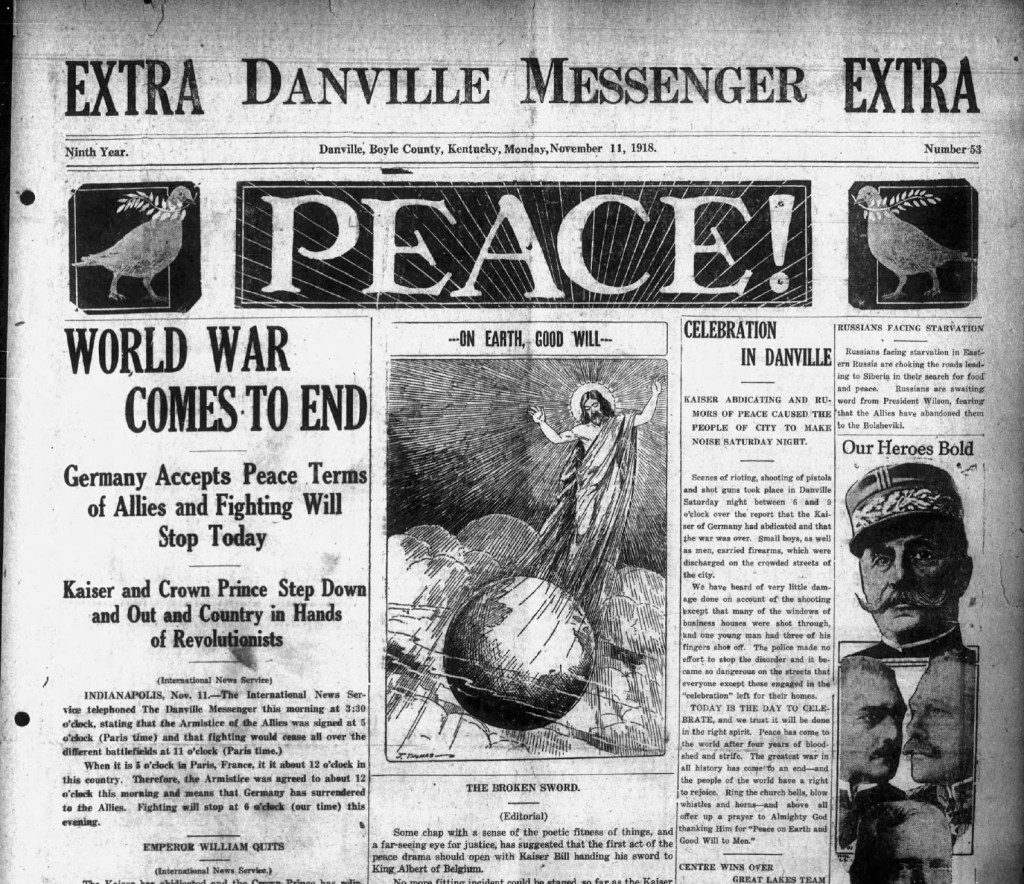 The front page of an extra edition of The Danville Messenger published on Nov. 11, 1918. (Advocate-Messenger archives)

One hundred and one years and one day ago, Danville’s newspapers had some of the biggest, boldest front pages ever seen. The Kentucky Advocate and an extra publication of The Danville Messenger — the two local papers that existed before they merged to become The Advocate-Messenger — both celebrated the armistice that ended The Great War (World War I). 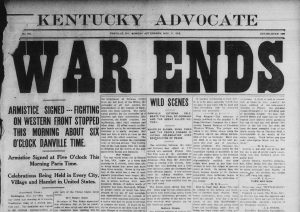 The front page of the Kentucky Advocate on Nov. 11, 1918. (Advocate-Messenger archives)

“WAR ENDS,” read the headline emblazoned across the top of the Kentucky Advocate, in letters so big it only took seven of them to stretch the entire width.

“PEACE!” exclaimed the front of The Danville Messenger; the one-word headline was accompanied by a dove with an olive branch on either side and a cartoon showing Jesus spreading his arms out above the earth.

“The International News Service telephoned The Danville Messenger this morning at 3:30 o’clock, stating that the Armistice of the Allies was signed at 5 o’clock (Paris time) and that fighting would cease all over the different battlefields at 11 o’clock (Paris time),” the Messenger’s lead article states. In a front-page editorial paired with the news story, the newspaper celebrated the abdication of Kaiser William II, the king of Prussia, and called for permanent world peace, using the Kaiser’s sword as a metaphor.

“What, would any clean-handed man besmirch his good right arm with the feel of the miserable thing? (the Kaiser’s sword) We think not,” the editorial states. “No, let Prussia’s sword rust in its clotted scabbard; let it rest in the deserted halls of Potsdam palace, forgotten by men and feared by no one forever more.

“Aye, let the fat rats of the royal sewers nibble at its stained grip, and the clean rust eat it little by little until it crumbles and disappears; a relic of the age of hate, the stained, clotted, cruel symbol of what freemen have blotted from the earth.”

At the bottom of the Messenger’s front page, photos of the leaders from the Allies and the Central Powers were juxtaposed against each other at opposite corners.

“Here is autocracy’s end for all time,” the cutline under the photos of the Central Powers’ leaders reads. “Its great might could not win — for the lack of right.”

Under photos of the leaders of the U.S., United Kingdom, France and Italy, the cutline extolled, “to them must go the glory and honor of having stood their guns for humanity, justice and freedom’s victory.”

The papers also had local news of people reacting to the end of the war.

“The military soldiers of Centre College paraded through the streets and were given an ovation,” according to The Kentucky Advocate. “They were followed by the students of the school for the deaf who marched through the streets waving handkerchiefs with old glory unfurled to the breezes.”

Not all celebrations were peaceful, however.

“Scenes of rioting, shooting of pistols and shotguns took place in Danville Saturday night between 6 and 9 o’clock over the report that the Kaiser of Germany had abdicated and that the war was over,” a story in The Danville Messenger reads. “Small boys, as well as men, carried firearms, which were discharged on the crowded streets of the city.

“We have heard of very little damage done on account of the shooting except that many of the windows of business houses were shot through, and one young man had three of his fingers shot off. The police made no effort to stop the disorder and it became so dangerous on the streets that everyone except those engaged in the ‘celebration’ left for their homes.

“Today is the day to celebrate, and we trust it will be done in the right spirit. Peace has come to the world after four years of bloodshed and strife. The greatest war in all history has come to an end — and the people of the world have a right to rejoice. Ring the church bells, blow whistles and horns — and above all offer up a prayer to Almighty God thanking Him for ‘Peace on Earth and Good Will to Men.'”