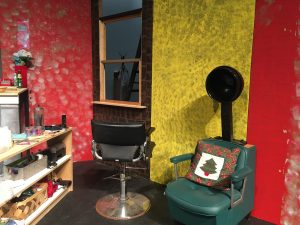 “Steel Magnolias” by Robert Harling is a comedy that will be showing on Nov. 14, 15 and 16 in Danville High School’s Gravely Hall at 7:30 pm.

The play tells the story of six strong women overcoming their individual problems with the help of each other. The main characters are Anelle, M’Lynn, Shelby, Clairee, Truvy and Ouiser, who are played by Sofie Sanders, Lina Morales, Rory Cline, Jenna Haines, Julia Hunt and Naomi Israel, respectively.

It is a play that despite having an all-female cast has “a little bit for everybody,” as Malcolm Springs, DHS media/tech coordinator, explained. It takes place in a small southern city which should be familiar to residents of Danville.

Oliver Levi, a freshman from DHS, acknowledged this. “Since we do grow up in a small town, many of the aspects of the show we can actually relate to.”

Hunter Buntain is a journalism student at Danville High School.

Danville High School celebrated Safe School Week from Oct. 28 to Nov. 1. Students were allowed to wear different kinds of clothes on this week to encourage not taking drugs because they are bad for you.

According to getsmartaboutdrugs.gov, Red Ribbon Week was “started when a DEA agent was murdered by drug traffickers in Mexico. After his death, his family in California wanted to honor his sacrifice. After local celebrations started in California, the NFP (National Family Partnership) made this national,” according to the website.

DHS Principal Thad Elmore said he was “open to new ideas” for DHS and maybe students and/or staff will continue to give Mr. Elmore new ideas to make Danville High School more interesting for everyone.

Seniors at DHS posted on Snapchat about all of their experiences during Safe Schools week, but especially Neon Day. Most of the seniors posted pictures of themselves wearing neon with a few words: “Neon proud and Drug free week 2019.” Two freshman students of Danville High School, who wanted to remain anonymous, were asked what they thought about Safe Schools week and if it was different from Bate and said, “This is definitely a new experience for us at DHS, this week was really fun and we hope that Mr. Elmore will do this next year.”

Lee Gulley is a journalism student at Danville High School.

Students enjoyed the change in the dress code. Pajamas and hats are not allowed everyday at school, so students were able to enjoy those changes for the week. Not only did the students participate, but teachers participated as well. A good time was had by all.

However, in spite of the fun, the real question that should be asked is if participating in safe schools week actually raises awareness to being drug free.

When asked if Safe Schools Week is effective and raises awareness about drug usage, senior Hunter Buntain said, ¨No, because people just take advantage of it and don’t really follow the real meaning behind it.” Students are given the opportunity to raise awareness, but instead are just taking advantage of the “fun” days the school has.

Another student in DHS who wanted to remain anonymous said, “It is not effective because I can guarantee you that most of the students that participate actually do drugs.” Students get so caught up into peer pressure that they may also believe that safe school week is dumb and only participate because the school expects them to.

Another student who is a senior at DHS also agrees that it is not effective. This student stated that ̈no one takes it serious.̈  Students think of it as a joke, making them feel as if this serious topic isn’t serious at all. Students take for granted the opportunity they have to raise awareness and be a role model to the younger kids.

Yet another senior at DHS stated that, “To raise awareness to this situation, the high-schoolers need to start acting mature and become role models for the younger kids. High-school students also should not begin to do drugs at a young age or expose other kids to do so.”

As this student said, older students should be more role models to younger ages. If all students decided to come together and promote awareness to the actual problem of drug usage, more younger students would follow that example and not use drugs. However, as safe schools week is now, students feel like it is ineffective and there should be more done to raise awareness to have our schools drug-free.

Juliana Tecpile is a senior at Danville High school.

Poetry Out loud comes to DHS 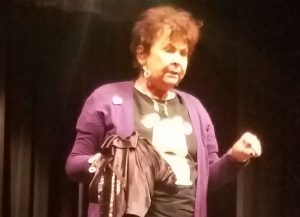 Sexton is a performing artist who grew up with the Appalachian tradition of oral storytelling. She was paid by the Poetry Out Loud foundation to come visit Danville High School and talk to the students about what Poetry Out Loud is.

She said that, “Poetry Out Loud is a national program where high-school students can compete by choosing a renowned poem and then reciting it.”

Danville High School will choose a student to compete at state, where the student will recite the same poem in front of a panel of judges; the winner of the state competition goes on to nationals in Washington D.C and if they are picked there, they win $20,000.

Danville has new ‘All Hands On Deck’ initiative

Friday, Nov. 1, was the first ever “All Hands On Deck” celebration for Danville High School.

The aim is to “reward students who are meeting benchmarks in behavior, grades and attendance,” Secondary Instructional Specialist Kevin Bandura, said.

All Hands On Deck was definitely a success. According to senior Samantha Sellee, it was “lots of fun.” She also said: “I’ve enjoyed it and I’m excited that we’re gonna keep doing that and I thought it was good for our school to do something like that because a lot of kids don’t think of the importance of good grades and good behavior, but when they have this every semester to reward them, they are encouraged to come to school and do those things.”

Nevertheless, Mr. Bandura admitted, “It was a huge experiment and not everything worked as planned. We are looking for ways to learn from the way that we did the first time, and then improve the process. So I think that each time that we do it, we will try to take what we learn from the previous events and continue to streamline and communicate better — and also find more activities that students will enjoy.”