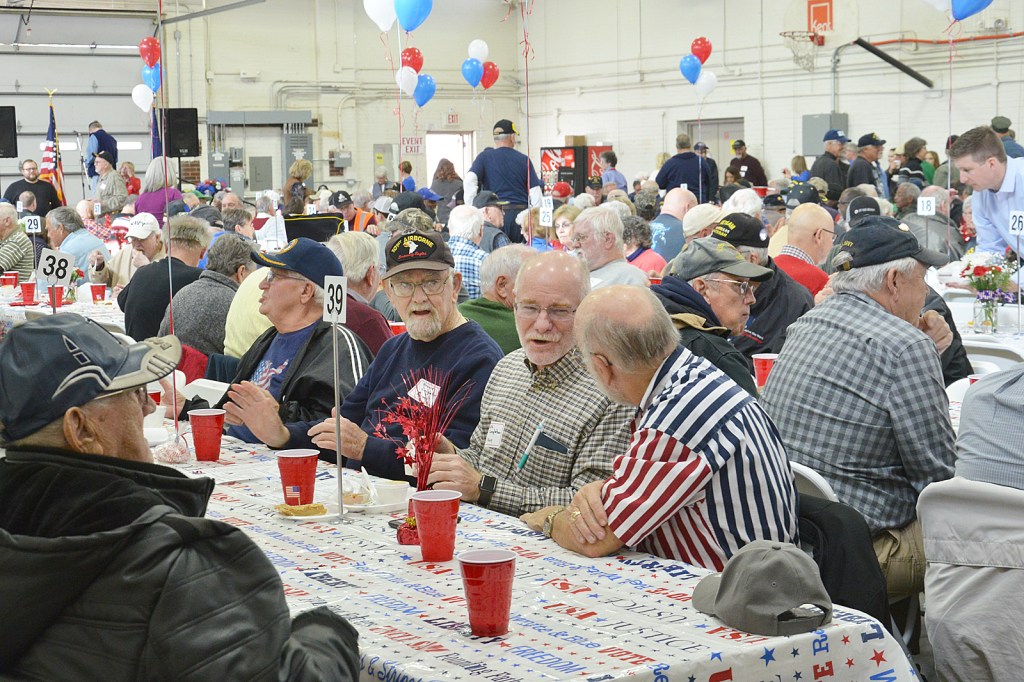 “You veterans are the pulse of America’s greatness.” 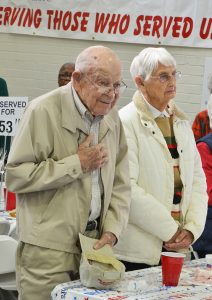 Donald and Rena Warren stand for the National Anthem. (photo by Robin Hart)

These were just a few words of thanks spoken by Ret. Brig. Gen. and Boyle County Judge-Executive Howard Hunt when he welcomed veterans and their families to the 12th annual Heritage Hospice Veterans Appreciation Day Monday.

“Veterans do all they can do to keep our country free,” Hunt said.

Veterans from all eras and branches of service gathered to have a free meal and visit with friends at the event, which was held at the National Guard Armory on Stanford Road.

Members of Masonic Lodges from District 21 spent all day Saturday and Sunday preparing for the massive lunch, just as they have in the past 12 years. A team of men spent all night Sunday smoking 110 pounds of pork for barbecue sandwiches; they prepared 120 pounds of coleslaw and made five and a half gallons of slaw dressing; 40 pounds of cornmeal was used for hushpuppies and 75 pounds were used for the fried fish, said head cook, Tom Brown. And on Monday, they fried 200 pounds of Icelandic Cod, he added. 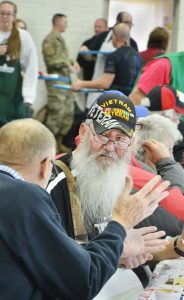 Monica Acob, regional administrator for the Kentucky Department of Veterans Affairs, was on-hand, meeting every veteran that she could. Acob said she was letting them know that the KDVA will be opening an office at the Armory on Stanford Road in December. “We’re excited to come here,” Acob said.

KDVA has an “out station” in Stanford, but they wanted to locate in Danville, too, in order to help serve more veterans in this area. The KDVA is an advocate for veterans, Acob said. They help them file compensation and pension forms, and work to see if veterans are eligible for health care benefits.

More details will be released later, but as of right now, the office will be open 8 a.m. to 4:30 p.m. three days a week, and hopefully will expand to five days a week, she said.

Mike Saunders, with GI’s Friend Inc. of Texas, was another new face in the crowd. He has been on the road since April and was in Danville for a mission conference at Bluegrass Pike Baptist Church. He said he figured the community would be celebrating Veterans Day and he brought gifts to share with the local vets.

He wasn’t expecting such a big crowd, but his organization was able to put together 500 gift bags filled with coffee cups, pins, and other trinkets, he said. 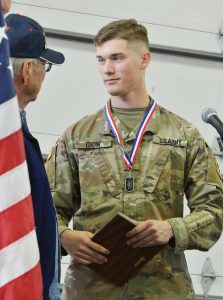 Pvt. Joshua Crow, 20, is recognized as the youngest veteran at the appreciation lunch on Monday. (photo by Robin Hart)

One of the highlights for the Veterans Appreciation Day event is the recognition of the youngest and oldest veterans attending.

This year, Pvt. Joshua Crow, 20, was recognized as the youngest.

Paul Chandler, 101, was awarded the oldest veteran. Chester Wolfe, 97, was recognized as the second-oldest veteran. Both men served during World War II.

As Richard Otto, another WWII veteran, slowly walked back to his seat with the aid of a cane, he looked up and said to anyone who was within earshot, “I get older and luckier.”