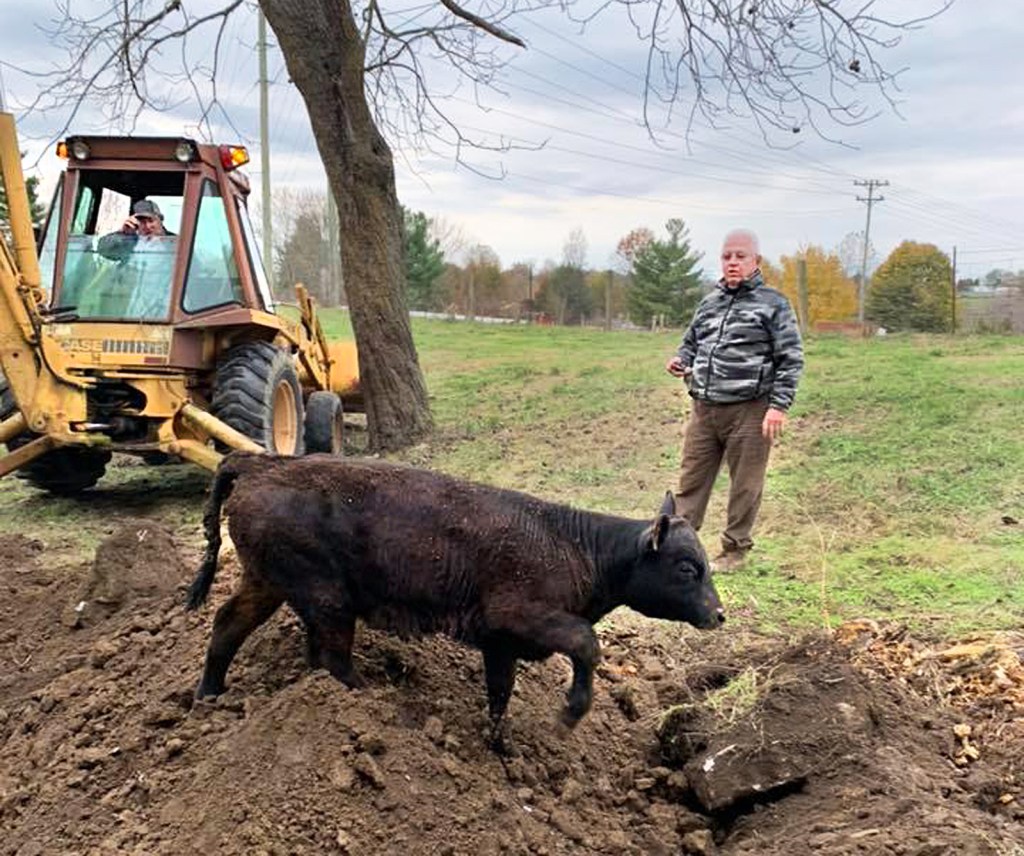 Backhoe operator Robert Riley adjusts his hat and farm owner Donnie Leonard watches his calf calmly walk away from the sinkhole Riley had just dug it out of Monday afternoon in Perryville.

Firefighters have a reputation of rescuing kittens out of trees, but in Perryville, firefighters were called on to rescue a calf from a sinkhole. However, a skilled backhoe operator turned out to be the hero of the day. 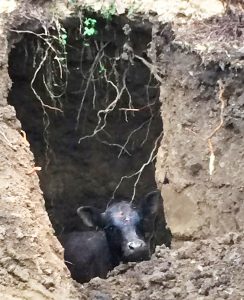 A calf peeks out of the sinkhole it fell into Monday afternoon on the farm of Donnie Leonard in Perryville. (Photo submitted by PFD Chief Anthony Young)

Monday afternoon in Perryville, Donnie Leonard heard one of his cows bawling and saw it acting like something was wrong, said Fire Chief Anthony Young. Leonard discovered a small sinkhole had formed between two fallen trees and the cow’s calf had slid down nearly six feet into the opening.

The sinkhole was only about two-and-a-half feet in diameter, Young said, but it opened up “like a little room down there and the calf was just walking around,” he said.

Leonard first called the Boyle County Fire Department for help, who then contacted the Perryville Fire Department since the incident had occurred within the city limits, Young said.

Young then got in touch with PFD Lt. Jeff Shields, who is an expert with ropes, securing knots and working with animals. Since he was nearby, Shields got some ropes from the station and headed to the field where he planned to use them to pull the calf out to safety.

Once they arrived, Leonard was already using the front end loader of his tractor to push out dirt, Young said, and he had called Robert Riley to bring his backhoe to finish the job.

“The fire department didn’t do a lot,” Young said, because it was determined that the easiest and quickest way to rescue the calf was to dig it out instead of using ropes to pull it out. 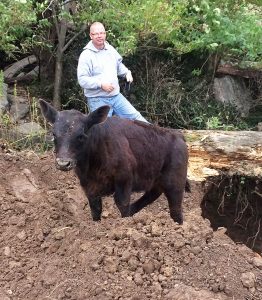 A calf walks away from the sinkhole it had just been rescued from as PFD Lt. Jeff Shields watches.

It took only about 20 minutes for Riley to make a few swipes with the backhoe to create a ramp for the calf to walk up, Young said. Once the calf jumped out, it easily found its mom and wasn’t injured.

Young said when all of this happened at about 3 p.m. it was still a pleasant day. However they all knew the temperature was going to soon take a dive and rain was coming in, so they needed to quickly take care of the situation. Young was even prepared to call a large animal rescue team out of Lexington, he said.

Young said because of Riley’s skill with his backhoe, Shields told him, “We hit the easy button.”