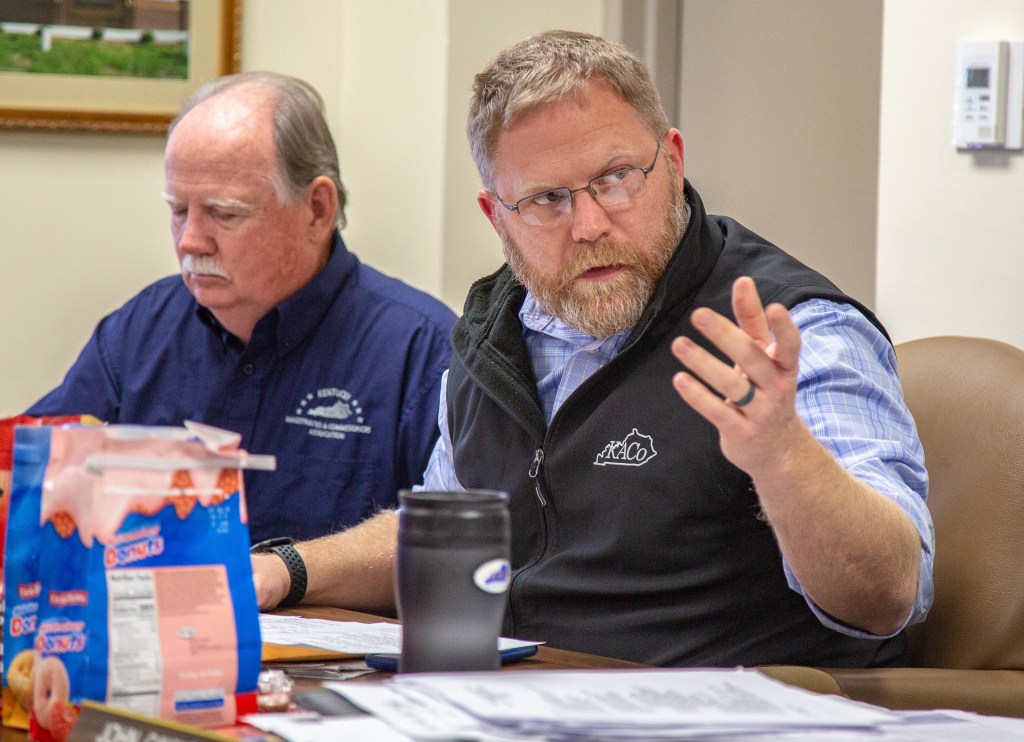 Boyle County Magistrate Jason Cullen was the only "No" vote against first reading of a payroll tax increase Tuesday. (Photo by Ben Kleppinger)

Boyle County is one step away from increasing its payroll and net profits taxes at the beginning of 2020.

Magistrates vote 5-1 Tuesday to approve first reading of an ordinance that would increase the county’s payroll tax and net profits tax from .75% to 1.25%.

Officials said the increase, which was recommended by the county’s finance committee, is necessary because of upcoming big-ticket expenses and a state law that will effectively bar Boyle County from ever increasing its payroll tax again after Jan. 1, 2020.

The half-percent increases are expected to generate an additional $2.75 million in payroll taxes and $450,000 in net profits taxes annually, according to Boyle County Treasurer Mary Conley.

A second reading must still be passed before the increases could become law.

“This is not a day that any of us like or want to be at. In some ways, our hand is forced,” said Magistrate Jamey Gay, a member of the finance committee who presented the proposed tax increase to the fiscal court Tuesday. “For the long-term financial health of our county, this is something we’re going to have to do moving forward.” 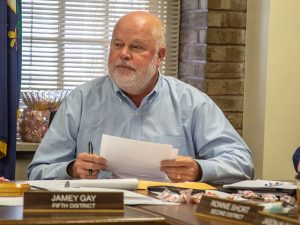 Gay said the county is “up against it” to make a decision about its payroll and net profits taxes because the 2020 Census is almost certainly going to certify that Boyle County has a population of more than 30,000 people.

Thanks to an obscure state law, counties can’t really increase their payroll tax rate after passing the 30,000 threshold; doing so risks losing most or all of the payroll taxes paid by workers inside incorporated cities.

Officials had said previously Boyle wouldn’t officially hit that 30,000 mark until the 2020 Census is certified, which would happen in 2021. But Gay said Tuesday the county has obtained a legal opinion that when the Census is certified, it would be retroactive to Jan. 1, 2020. That means Boyle County has less than two months before it loses the ability to increase its payroll tax rate, possibly forever.

Gay said Treasurer Conley developed a 15-year projection of expenses and revenues for Boyle County that includes anticipated year-over-year increases in state retirement payments and an $11 million bond issue to fund construction of a new jail. The projection doesn’t account for other potential capital expenses, nor does it account for the possibility a jail bond could be even twice as big at $22 million. Even so, Gay said Conley’s projection shows the county running out of surplus and beginning to eat into its general fund again within nine years.

Conley declined to provide a copy of her projections to The Advocate-Messenger Tuesday without further deliberation on whether those projections should be public.

Not something anyone wants to do

“I don’t think there is a single member of this court whatsoever that wants to do what we are undertaking as a potential today,” Judge-Executive Howard Hunt said. “But if we are good caretakers of the public trust, then this is something we have to pay attention to.”

Multiple magistrates echoed Hunt’s perspective, explaining they did not want to raise taxes but saw no other way to keep the county on financially stable ground.

Caywood asked his fellow magistrates to vote in favor of the increase even if they have previously made promises to never raise taxes.

“Sometimes, we have to eat our words,” he said.

Magistrate Phil Sammons said he “has been guilty” of what Caywood suggested and has said before he would never vote for an increase.

“But there comes a time when … you’ve got to fight. … I just wish there was some way to get revenue without doing it. But there’s no way that I see and I’ve studied this for months.”

“Just for the record,” Hunt said after the vote was taken, “I am in agreement with the majority.”

Cullen said he voted against because of the “preposterous reason that we have to increase taxes because our state legislators won’t act and fix something that is generally unconstitutional.”

“I understand why it has to be done — there’s no doubt about that,” Cullen said. But, he added, he doesn’t think increasing the payroll tax is the only option the county has.

“We have options of finding other ways to pay for things, but those options are not working for us,” he said, in an apparent jab at the Danville-Boyle County Economic Development Partnership. “… This will not take us very far. So it is imperative that we, A) tighten our budgets, but expect more out of those who are in charge of economic development in this county and the surrounding counties. … The next several years, we need to look hard and expect more from who we invest in.”

“I mainly did that because I believed that everybody at this table had a right to vote on it,” Cullen said. “… at every step along the way, I said it’s not right to have to do this to taxpayers. So it’s hard for me to have this go through, but I completely understand why.”

If the tax increases pass, they wouldn’t have much impact on the current fiscal year; the county might collect three months worth of the new taxes before the next fiscal year arrives, Conley said.

A projection from Conley shows Boyle’s payroll and net profits tax revenues jumping from about $7.33 million this fiscal year (budgeted) to $10.55 million in fiscal year 2021 (projected).