Giving employees a voice has kept Donna Peek with the city, but now she’s moving on 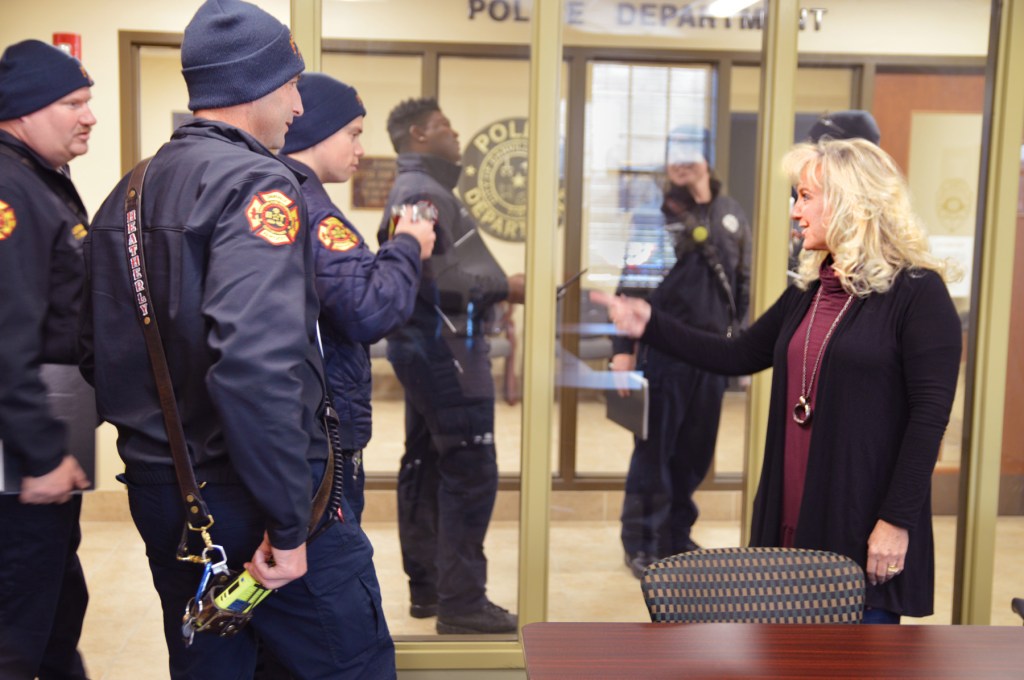 Donna Peek jokes with Danville city firefighters as they finish a meeting together recently at city hall. (Photo by Bobbie Curd)

Anyone who’s familiar with Danville City Hall knows Donna Peek. And for good reason — Peek is a decades-long city employee, and one whom other employees turn to.

She sat down recently to talk about what a day on the job is like for her, which was difficult. Even though her easy smile stayed on, which also beams from her bright blue eyes, it’s easy to tell what a huge transition it is coming up for her.

On Nov. 30, Peek will retire after 30 years with the City of Danville. In those three decades, she’s worked for six mayors; seven city managers; at least six fire chiefs … And she’s seen it all.

“I’ve seen a turnover of the whole workforce, several times,” she says from her office, taking a quick glance around at her framed certificates, books, stacks of employee folders …

Peek came on as a part-time secretary in the mayor’s office, hired by City Manager Ed Music, while she was working two other part-time jobs. Later, she landed a full-time position in payroll where she also did human resources, until City Manager Steve Biven asked her to be city clerk.

The next city manager decided payroll should be done elsewhere. Then current City Manager Ron Scott decided to split HR from the clerk’s position, moving Peek into the role of HR director.

There are mornings she’s in by 7:30, but usually always 8 — they start their days at 8:30. But if she’s working with employees in dispatch, for instance, over insurance needs, she needs to be available during their shift, which can have her there at 6:45 a.m.

“The typical thing about my job is that there’s never a typical day,” she sys.

She will have meetings to plan around; employees always needing something — and that’s what she’s supposed to do, and what she wants to do. Peek oversees the application process and sets up interviews with other departments, and does some interviewing herself. She’s the person employees talk to when they have issues or a problem, whether it’s with insurance, retirement or an official. 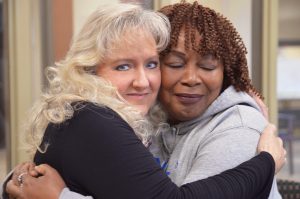 Donna Peek, left, gets a hug from longtime employee Joyce Collins. After 30 years, Peek’s favorite part of her job has been working with city workers.“They are the most valuable asset that this city has. And I hope people realize it.”

Longtime employee Joyce Collins walks by the office and pops in. She says Peek has been there for her through everything, and doesn’t know how she can be replaced; as they hug, Collins tightens her eyes closed. 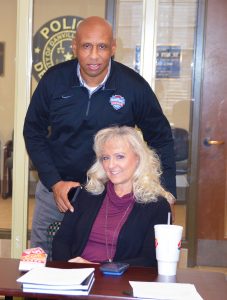 Danville Police Chief Tony Gray popped into a meeting with retiring Human Resources Director Donna Peek to say how much he will miss her after she retires. “She’s a good one. Always has been,” Gray said.

Another pop-in by Police Chief Tony Gray also had Peek smiling, as she sat working with Danville firefighters, one of the many groups she meets with frequently. They all say she will be missed; they turn to her often. “I need a picture with Donna,” Gray says, promptly moving across the room behind her chair, leaning down to smile with her.

“I love the employees. Our employees make this city run. I’ve said that; I believe that. I believe it in my heart,” Peek says. “They are the most valuable asset that this city has. And I hope people realize it.”

Over the years, Peek says the hardest thing she’s had to deal with is when someone has to retire due to disability. “We had someone a few years ago … in a day, his life was turned upside down. He went to the doctor and found out he was dying.” He was diagnosed with cancer, and came in with his spouse to get help from Peek on filing social security and getting retirement lined out. She was able to get him help in a week.
“Getting someone processed through disability for his retirement when he wasn’t going to make it to the year he could retire — it can be really difficult.” Although being the link to help them during such a horrific time was very rewarding, “it was still very sad for me. Those are hard to deal with.” 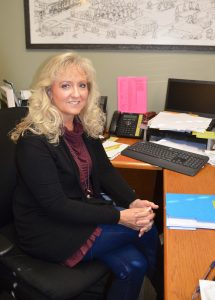 She also dreads when someone who loves their job and wants to work gets hurt, like a police officer who was injured during a pursuit. “He was injured so badly, it took his job away. Knowing he wanted to work … If somebody has a disease or injury that just stops their career, and they’re young and aren’t ready to retire. That’s the hardest thing. I’ve sat and cried with people.”

Peek could have retired three years ago, after working for 27 years, but chose not to because she wasn’t ready to leave the employees she works with. “I want to be able to have a voice if they don’t, on insurance or anything else to help them out. So I didn’t go,” she says.

But now, with the changes in the state with pensions, “I’m at the mark with the pensions where I’m basically losing money to work. And with the actuarial changes — they take effect Jan. 1, and so you had to be out Dec. 1 for the change not to affect you …” So, she felt it was time.

“I was going to announce in July, but wanted to respect (City Manager Ron Scott’s) retirement announcement,” who also retires at the end of this year.

“I thought well, I’ll just wait and stay.” However, things have changed. Peek doesn’t feel like she has the same leeway to help employees the way she has in the past; she was not comfortable sharing why.

But Peek will say, “At some point, morally — internally, maybe — I have to think about what’s best for my brain, for me and what I believe in. If I believed in it, I’d stay. If I can’t personally agree or morally agree … you know it’s time.”

Peek says her husband, Jeff, a former Danville police chief, is excited. “He’s been retired for 12 years. He’s ready for me to be able to spend more time with him.” She says they are ready to spend more time with their moms, too, “because they’ve given us so much and we want to give back. We want to travel a bit, see the grandkids. And golf. I love to golf.”

Peek wants to get more involved with her church, hopefully expand her role there. She works Sunday mornings with the children’s ministry as a coach, and wants to move into a youth role eventually.

She’s coached high school and rec league cheerleading for years. “It’s so much fun. I love kids. I may do more with that, I don’t know if it will be something in school or what. But yes, there’s plenty to keep me busy. It’s time to think about other things than just with the city.”

Back in the early ‘90s, Peek recalls a workshop they did with Mayor John Bowling, someone she says always thought about what was best for Danville, and constantly thought about how the city will get ahead of what it needs. The workshop was called Vision 2020, and it’s odd to think today about what she was thinking then.

“Back then, thinking of 2020, it seemed like space age,” she says, laughing. Millennium Park was just a thought then, to put it into perspective. “And here it is, almost 2020, and I’m retiring. That was pretty cool to be apart of that. And to come full circle.”