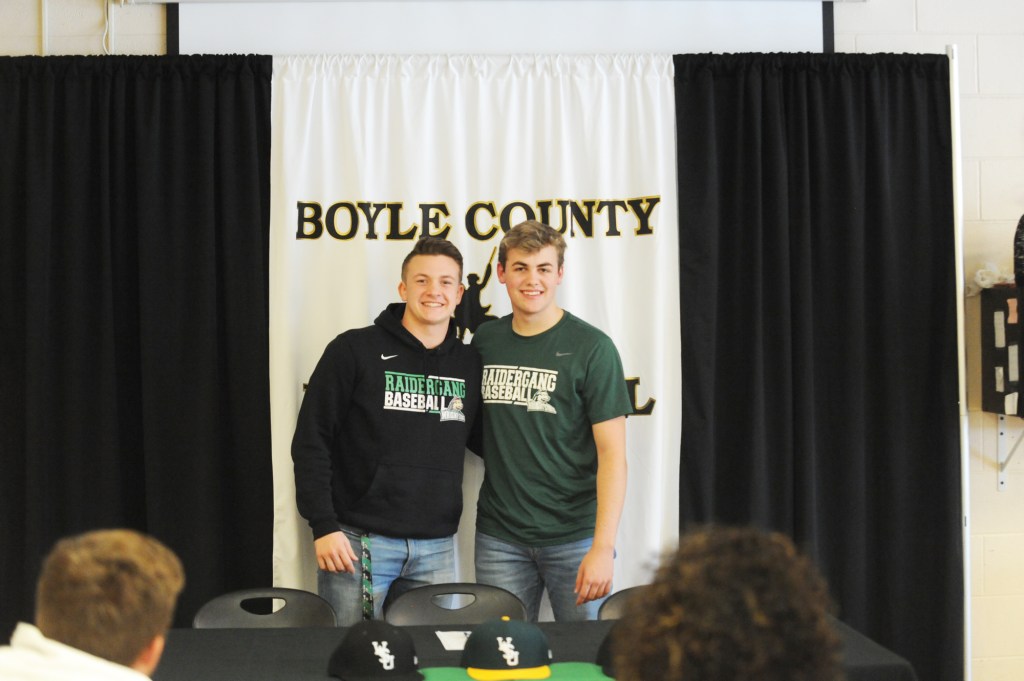 While Drew Baker and Grant Hotchkiss decided to make their commitments to Wright State official together on Wednesday afternoon, Boyle County baseball coach Kyle Wynn says that their decisions were uniquely their own.

“As a coach, I’ll never tell someone to go to this school or go to that school, but I do want them to go to a school that I feel like is fitting for them,” he said to a gathering of family and Boyle County students. “They’re going together, but they made the decisions on their own. Drew committing one time and Grant committing at a different time — they made sure that that was the school for them. I think that’s special as far as getting to go together, but they’re also going together to a place that they both feel comfortable and I feel like they made the right choice with Wright State.”

Baker was the first to commit to play for the Raiders, and he said it wasn’t a matter of what he liked about Wright State, but how little he didn’t like.

“I liked pretty much everything,” he said with a big smile on his face. “I liked the coaches, the campus, where it’s placed. It’s just under a three hour drive north. So it’s just far enough away from home, but it’s still in ‘mama range’ I like to say.”

For Hotchkiss, the decision process took a little bit longer, but ultimately he said it was a “clear choice” to go to play for the Raiders.

Both players are coming off seasons that were marred with injuries, Baker missing the entirety of 2019 and Hotchkiss’s season ending after only 10 games. Still, in those 10 games, he was able to flash his abilities, hitting .414 with seven walks and eight stolen bases.

“It’s kind of fitting that they’re both going to Wright State. They’ve had similar paths and similar stories,” Wynn said. “They’ve both battled injuries and overcome them to go to Wright State. The biggest thing about them, though, is for that to have happened and Wright State — for a commitment from a school to hold strong for them is a tribute to the type of young men that Drew and Grant are.”

It’s that character that Wynn said he hoped to convey to the coaching staff at Wright State.

“The biggest thing that they’re not going to regret is their character,” he said. “Obviously the talent — you can recruit talent all day and put it on the field. But if you’re not there every day with the kids, you don’t see the day in and day out. You don’t see them in the halls and their character. That’s the biggest thing I tried to express with Drew and Grant is you’re getting heck of baseball players, but you’re getting kids who are going to work for you and fight for you. That’s what I want as a coach, and I know that’s what they want as college coaches.” 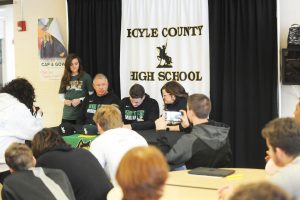 In speeches to the crowd, Wynn expressed that he knew early on how good both Baker and Hotchkiss would be.

“With Drew, it was my first or second year — we started the baseball youth league called the Central Kentucky Sliders,” he remembered. “Seeing Drew as a little guy running around the field — and I knew he played football and some other sports – but just from that I could tell he had a passion for baseball.

“First time getting to know Grant — he came to us in eighth grade. There was talk about him wanting to come here and we knew he was a great athlete,” he added about Hotchkiss. “I remember someone telling me that baseball was his best sport. Early in the season, it was cold and we had gotten done with high school practice and the middle school was coming up after us so I stayed and watched. I was only there for 20 minutes, but 20 minutes was all it took to understand that Grant had a future in baseball.”

While the decisions to go to Wright State were made independent of each other, both Baker and Hotchkiss acknowledge that they’re happy to have a high school teammate and friend going with them.

“It’ll be a lot of fun. A lot of times you go off to college and don’t know anybody and have to make friends,” Hotchkiss said. “That’ll be a leg up for us. We’ll just be able to go up there and focus on school and baseball.” 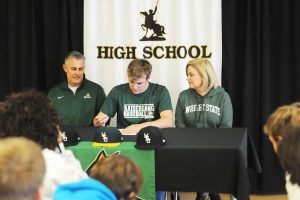 “I had been texting a little bit with the guys that were committed at the time so I figured it’d be cool either way,” Baker said. “But him committing was also great. Knowing one of my best friends is going to be up there and getting to room with him will be really cool.”

They also both agree that having their college choice locked up before their senior seasons start will allow them to play looser and focus on the season and not the next level.

“I remember when I committed it was a big relief. Just all the tension off your shoulders and you just get to play baseball now,” Baker said. “It’s no longer a ‘Oh I had a bad game’ or ‘coach didn’t get to see me’, I can just play baseball and have fun.”

“To already know where you’re going and have your room picked out, it makes senior baseball a lot of fun,” Hotchkiss echoed. “Hopefully we can do something with that.”

Boyle County’s 2020 baseball season kicks off on March 16 at home against Pulaski County.