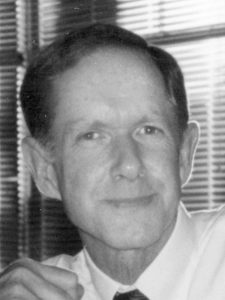 Thomas Francis Halloran died Friday, November 8, 2019. Born on October 5, 1937 in Medford, Massachusetts, he was the son of Thomas Francis Halloran and Natalie Russ Halloran. He earned his Bachelor of Science Degree at the United States Naval Academy, and subsequently served from 1961 through 1966, including tours in Long Beach, CA on a destroyer and San Francisco on a training ship. He was selected for a degree in Naval Architecture at Massachusetts Institute of Technology and then extension of service at A.U.T.E.C. in the Bahamas.

Tom went on to earn his M.B.A. from the Wharton School of Business at the University of Pennsylvania. He began his career with the Boeing Company in Seattle, then returned to New England to serve as controller at the Eastern Telephone Company in Durham, Connecticut and Connecticut Communication Corporation in New Haven. He was a systems comptroller and used his talents to computerize the Springfield Massachusetts Technical Community College. He closed his career as controller for Capewell Aerial Systems in South Windsor, CT.

Tom is survived by his wife of 50 years, Frances West Halloran; daughter, Rebecca and her husband John Farris, of Lexington; and son Grant Halloran and his wife Marita of Franklin, Tenn. Additional survivors include: grandchildren Addie, Julianna and Natalie Farris; Alessandra, Eleanor and Thomas Halloran; and brother-in-law Arthur Donaghy. Tom was predeceased by his sisters Susan Faith Donaghy and Martha Catherine Palladino, as well as his brother-in-law, Donald Palladino.

Tom was a quiet man of reserve and integrity. He was a loving husband, father, grandfather and father-in-law. He faced his 15 years of Parkinson’s Disease with true New England grit and grace. His love of desserts, especially homemade apple pie, never abated.

A memorial service will be held on January 11 followed by a reception at the Presbyterian Church where he was a member. The Rev. Caroline Kelly will officiate. Burial will be in Arlington National Cemetery. Memorial donations are suggested to the Save the Children Foundation at www.savethechildren.org (Go to ways to give, honor someone special). The online guestbook is available at www.stithcares.com