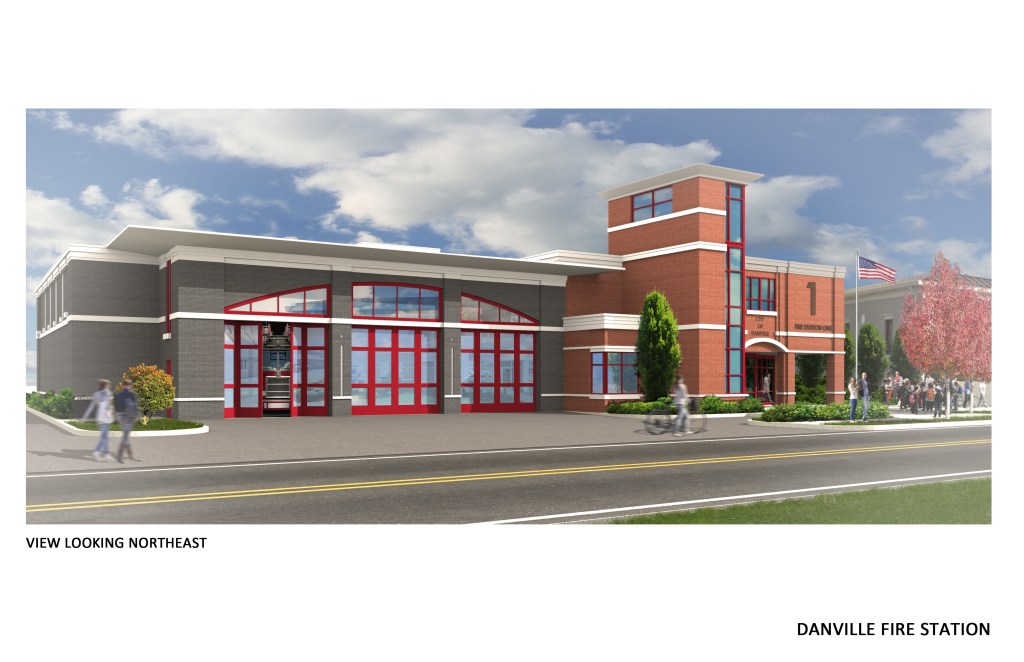 Bravura Corporation will be adding $53,500 onto Danville’s tab for the design and construction of the new downtown fire station, bringing the projected cost of the new station to over $8 million. Danville City Commission unanimously passed a resolution this week allowing the addition of a basement to the station’s plans, leading to the increased cost.

The design plans for central station were released back in June. The new station will be built on West Main Street next to city hall, where Dexter Real Estate-Insurance and Off Broadway Terrace apartments used to be. That land was purchased by the city for about $1.15 million.

The station will include a courtyard, memorial plaza, two outdoor patios, a private fitness center and private dorms.

The setup will be able to include an underground tunnel connecting it to police headquarters next door at city hall in the future. The city projected the cost of the station at $7.5 million.

The city began planning for the new station about three years ago. The existing fire station, across the street and on the corner of Main and Fourth, was built in the 1960s and has become structurally unsound. Bravura Architects evaluated the station, advising a new location was needed.

The new central fire station is planned to consist of 49,367 square feet on a total site plan of 1.13 acres. It will include 20 parking spaces for the department, an area for a taller antenna and an area for a generator/storage building.

In a previous presentation given to the city commission, Bravura showed how the building will have a wrap-around drive, allowing fire trucks to pull through and avoid backing in off of Main Street, as firefighters are forced to do now. Due to where the living spaces and administration wing will be right of the station, next to city hall, an area in between was opened up and will be turned into a landscaped courtyard.

The plaza out front will be named First Responders Memorial Plaza, and will be directly connected to city hall’s plaza by steps.

The station was split into “hot and cold sides,” designating areas where hazardous materials coming back on the trucks and gear will be, and making clear delineations between where gear is stored and living spaces are.

Inside will be an open, two-story lobby, a training room that can be used by the community, with an outdoor patio. There was talk of a possible three-story stair tower out back of the station, which could be used as a training space.

Living spaces on the second floor are said to be “very generous” in space by the architects, each with three beds. The area will include a day room, dining room and kitchen, as well as the floor’s own outdoor deck.

An area near the apparatus bay will also provide space for indoor training.

Architects said they kept the outside design of the building compact as so not to overwhelm city hall. There will be a signature arch over top of three truck bays, and the building will use traditional brick and stone detail.

In a previous interview, Danville Fire Chief Ken Pflug was very happy with the design; he said he is thrilled to have been given a “50-year station with 20 years no-touch.” He said the way it’s designed, it should be at least 20 years before any changes would ever be needed.

The city commission also handled several other items this week:

The group worked on nominating and assembling a task force that will represent Danville and work with Bravura to successfully complete the project. Coffey said discussions of the first phase of the work plan included assembling needed material and maps; completing community awareness and input activities; defining consensual opportunities and issues forming the planning objectives; outlining the mechanics of working together; and establishing a preliminary schedule for the first phase of the project.

A preliminary listing of schematics of “thematic groups, institutions, neighborhood residents, officials, economic stakeholders, community organizations, regulatory agencies and general citizens” is also planned to be included in the project. They also discussed different ways they can engage different groups and query them.

“Biggest thing outside of that, they want to have a workshop with you guys to really get everything started from their end, so that you all understand more in-depth of what their process looks like,” Coffey told the commission.

He said the work on the master plan will involve a lot of community input, “as it should,” and that the consulting firm wants to make sure everyone understands that and “that we’re all on the same page. That will happen within the next 30 days, and we expect them to reach out to us in the next few days to scheduled that.”

Coffey asked the commission to authorize the contractor to go ahead and proceed with the project at risk, for the cost of $324,000, with some part of that funded by grant.

He said the reason staff is suggesting the city speed things up is because they are doing a lot of improvements on utilities to support growth in the industrial park.

“As such, this is a component of that, and we need this done so we can go to the next peace,” Coffey said. “Staff recommends you proceeding, at risk, and allowing the contractor … to go ahead and start. We can probably have a waterline installed before you actually get the grant approval.”

City Attorney Stephen Dexter said the risk is the grant not being awarded, which would mean the city would be responsible for the full amount instead of half. However, Coffey said the project would have been recommended regardless of receiving a grant or not due to its need.

Coffey said the contract amendment was necessary due to the change the “onsite continuous inspector of record” from full-time to part-time for the project, changing it from $75,000 to $50,000.