Looking back: Water turned to oil for Danville businessman in 1900s

An oil well was a conundrum in Junction City in the early 1900s. 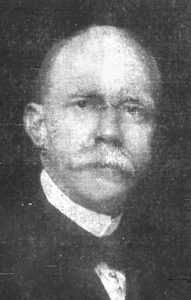 John W. Rawlings is shown in 1916 when he was chosen campaign chairman of the Boyle County Democratic Party for the fall election.

Danville businessman John W. Rawlings discovered oil in a water well on land he owned near the Standard Oil Company’s business, according to articles in The Advocate-Messenger. It was first believed the oil came from the oil company’s tanks or a nearby store that sold kerosene.

F.R. Burke, who ran the grocery store across the alley from the well, discovered that his kerosene tank had been losing oil and said the oil well stopped giving up kerosene.

The leaks stopped several weeks later, but the oil continued to stand in the well. For a time, neighbors used the oil to burn in lamps.

Rawlings told the newspaper that his well was cased, the casing being absolutely leak-proof. He drew a cup of water and it contained the usual amount of oil.

“A doubting Thomas stood by, and was asked to swallow it. He only got a mouthful, when he began spitting and looking for pure water to wash out the oily taste. There is absolutely no doubt of the oil flowing in a steady quantity,” according to the article.

Edward Hammer secured a quantity of oil from Rawlings to burn in a lamp. He said it made a beautiful light.

“Apparently the oil goes through a state of filtration in the earth prior to entering the well.” The residents were enthused over the apparently rich discovery.

By June 1911, several hundred gallons had been pumped from the well, a fact which “completely refutes the theory that escaping oil from the Standard tanks is soaking into the ground and finally reaching the well.”

Thousands of gallons of oil would have to escape from tanks in order to reach the one well at the great distance. Other wells in the same location were not affected. Rawlings planned to organize a company and develop his property.

Rawlings kept busy in business and political affairs in Danville. He served as chairman of the Democratic Party in July 1916. He also was a candidate for Boyle County judge, state auditor and state superintendent of public instruction, but was defeated in each race.

Rawlings served as superintendent of the Boyle County schools for several years. He also was named to the Parksville Cemetery Board.

Rawlings lived in Parksville before moving to East Main Street in Danville. He later studied law and opened an office with Robert Harding. He represented the Louisville and Nashville Railroad Co. in cases in Boyle Circuit Court.

Rawlings was born about 1858 in Marion County.

His wife, the former Delilah Jane Westerfield (1857-1920), daughter of Mary and Frank Westerfield Sr. of Parksville, was a teacher at Walker’s Chapel in 1876.

Rawlings died in 1939 in Bradenton, Florida. He and his wife are buried in Bellevue Cemetery.