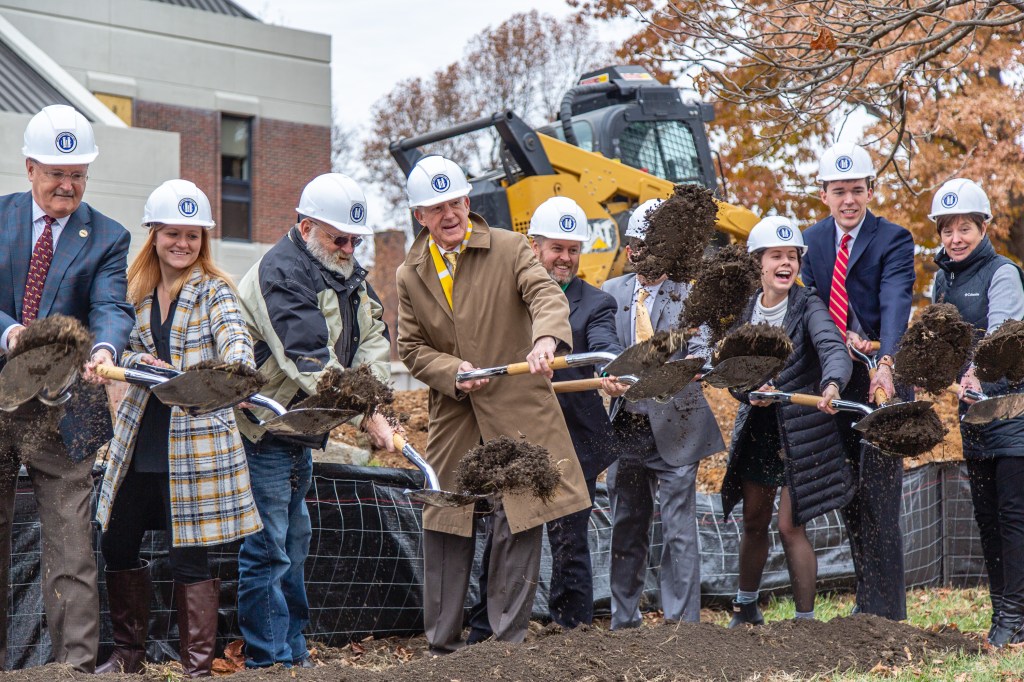 Officials and those involved with the Olin Hall project toss their shovels of dirt during the groundbreaking ceremony. (Photo by Ben Kleppinger) 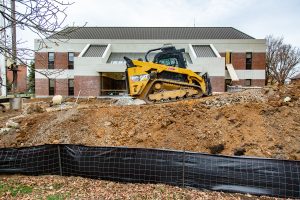 A construction vehicle sits parked on a dirt mound in front of Olin Hall. (Photo by Ben Kleppinger)

Demolition and construction was already well underway Tuesday at Olin Hall on Centre College’s campus, but that didn’t stop officials from holding a symbolic groundbreaking ceremony for the transformative capital project.

Centre is expanding Olin Hall by 11,700 square feet, redoing the interior of the existing building and creating 4,700 square feet of undeveloped space in the basement, said Dr. Leonard Demoranville, a chemistry professor designated as the “project shepherd.”

“Really, this event is about what that new space will do for our students,” Demoranville said. “… As science and teaching methods change, the space we need changes.” 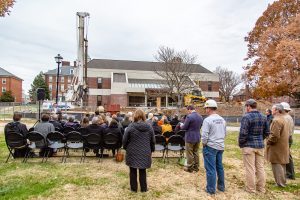 Olin Hall was originally built in 1988 and is home to many of the college’s STEM (science, technology, engineering and math) classrooms and offices. The renovation and expansion will modernize the facility and transform it into an impressive asset on the campus, President John Roush said.

“It was not our finest moment in its look or its function,” Roush said. “… We’re fixing that.”

Dr. Ellen Goldey said while Olin Hall is out of commission, other spaces around campus have been made available for the classes and professors’ offices that were in the building. 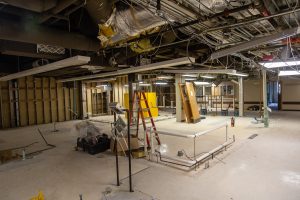 The inside of the second floor of Olin Hall has been gutted during the renovation project. (Photo by Ben Kleppinger)

It wasn’t easy and the temporary locations aren’t ideal, but a lot of different people worked together to make it happen, she said. In the end, she said it will be worth it.

“… Any great college can only be as great as their facilities allow,” she said. 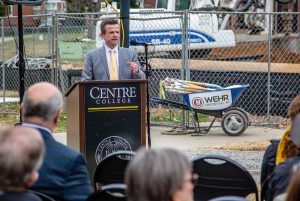 Centre Vice President Brian Hutzley talks about how complicated the Olin Hall project was to work out. (Photo by Ben Kleppinger)

The project is one of several identified as “foundational needs” on Centre’s 20-year master plan. Other recent master-plan projects completed include the new residence hall on the north side of campus, renovated tennis courts, ADA improvements and campus-wide lighting upgrades, Centre Vice President Brian Hutzley said.