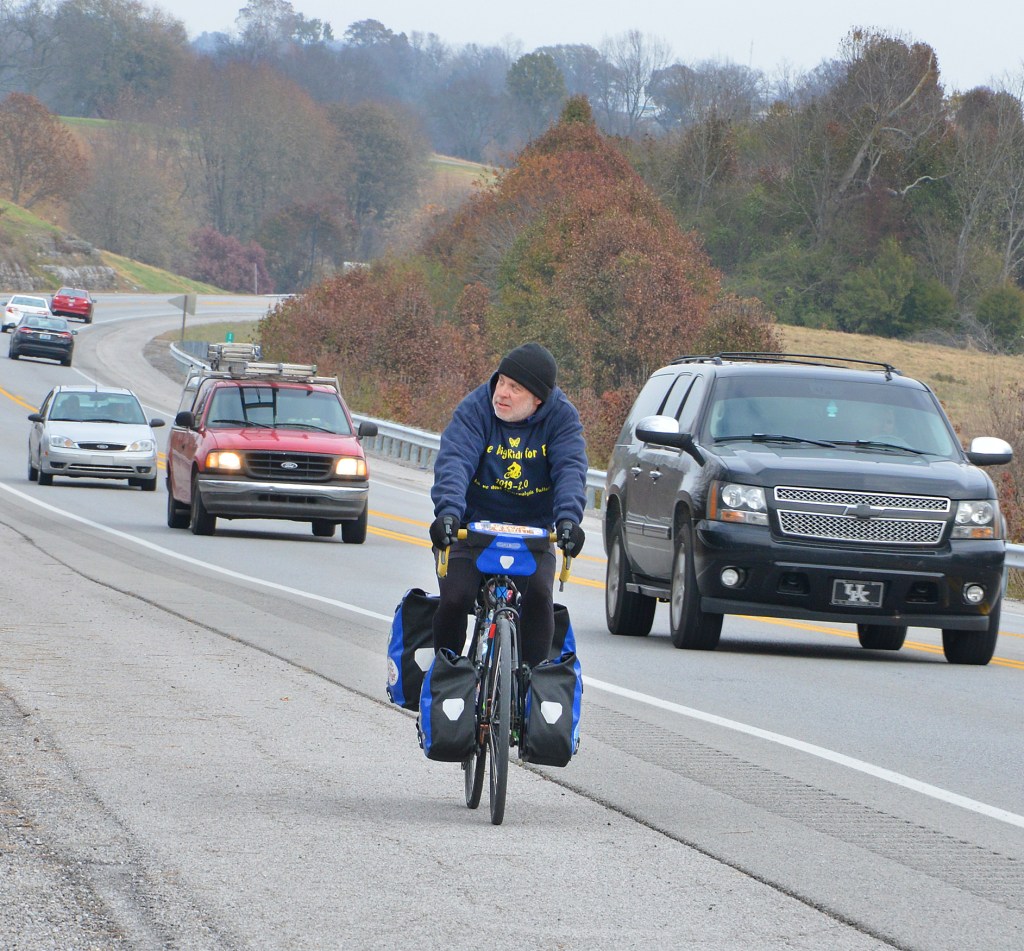 Robb Freed, of Glen Falls, New York, pedals into Danville on Ky. 34 Monday afternoon. He is riding across the country and back to raise awareness for the disease epidermolysis bullosa, commonly known as EB, of which his 13-month-old son died from in 2008. (Photo by Robin Hart)

Robb Freed’s mission is to make as many people as possible aware of the skin disease that killed his infant son several years ago. So he’s riding his bike across the country and back — for the second time in two years — telling everyone about the disease, epidermolysis bullosa, commonly known as EB.

On Monday, Freed pedaled through Danville on his way back to the Atlantic Ocean and his home in upstate New York. He’s been riding since April 24, when he left Yorktown, Virginia on his mission of “raising tons of awareness for people who’s never heard of it. We think that awareness is going to be a very huge important part of solving the puzzle of treatments and someday, a cure,” Freed said.

In August of 2007, Freed’s son, Drake E was born with unusual skin abrasions. Within two weeks, the dermatologist diagnosed Drake E with EB. After genetic testing, the family learned that their baby had an extremely rare form of EB, which was also the most lethal form, Freed said. He said there are five main types of EB, with more than 40 subtypes.

According to the EB research website, the disease “is a family of rare genetic disorders that affect the body’s largest organ: the skin. Individuals with EB lack critical proteins that bind the skin’s two layers together. Without these proteins, the skin tears apart, blisters, and shears off, leading to severe pain, disfigurement and wounds that may never heal.

Freed said his riding across the country “is not in memory of Drake E. It’s not in honor of Drake E.” He wants to help families that have a child with the disorder have “louder voices for the awareness of the disease. … Rare diseases get put back behind more mainstream diseases” for funding research, he said.

“Rare diseases sometimes don’t get the spotlight shown on them,” he said. “Hopefully this will lead toward more interest and more funding for treatments and a cure.”

To find out more about Freed’s mission, his website is: thebigrideforeb.