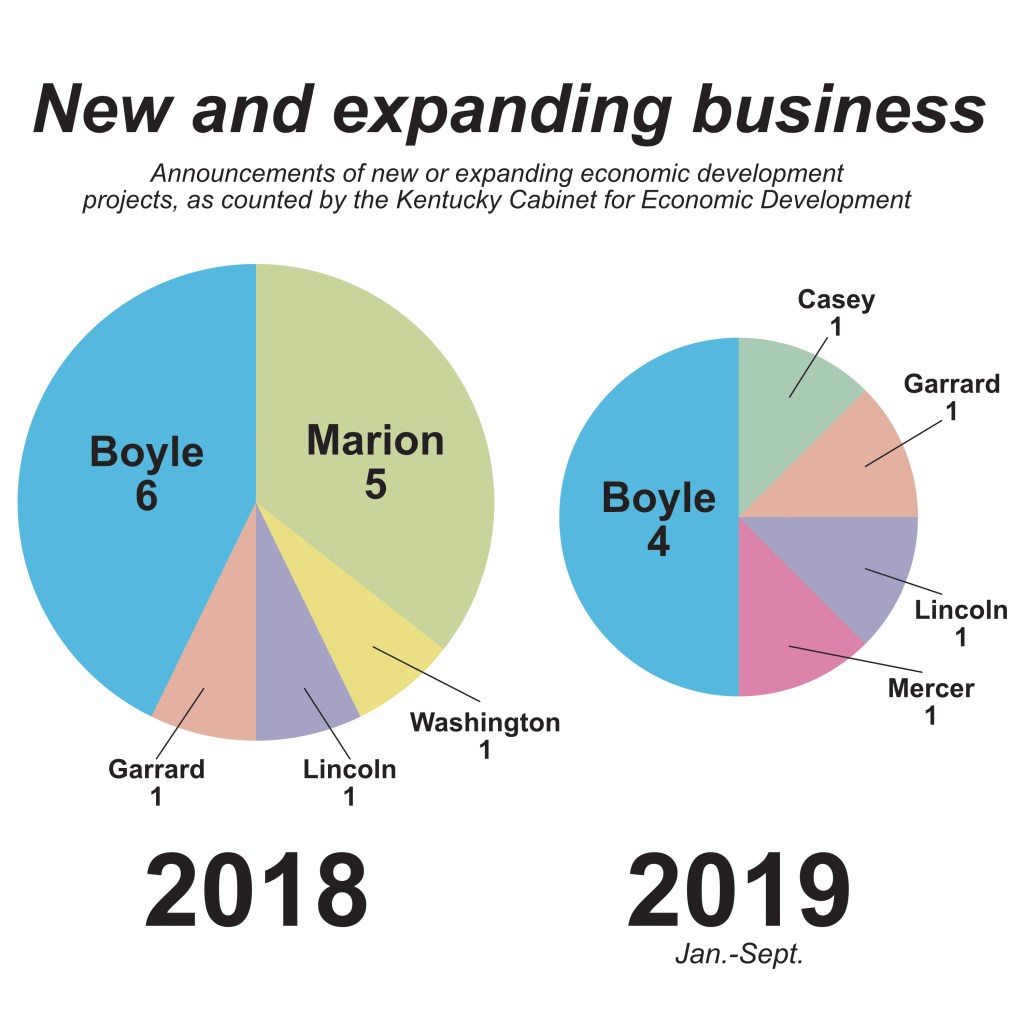 Boyle County has seen a majority of the new and expanded business announcements in the area in 2018 and 2019, as counted by the Kentucky Cabinet for Economic Development. (Graphic by Ben Kleppinger)

How does Boyle County fair on economic indicators compared to its neighbors? Quite well, according to data points assembled by the Economic Development Partnership.

Boyle County was first in seven of 13 indicators chosen for a prototype report presented to the EDP board Wednesday. It was last in none of the indicators.

The report compared Boyle with all of the other counties it touches — Casey, Garrard, Lincoln, Marion, Mercer and Washington. It listed the following data points:

The report is a first attempt at collecting economic indicators that could be updated and shared on a monthly or quarterly basis, EDP President Jody Lassiter said. 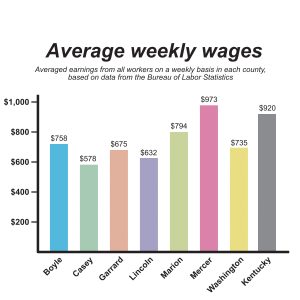 Data from the Bureau of Labor Statistics shows average weekly wages in Boyle County and all of the surrounding counties. (Graphic by Ben Kleppinger)

Danville City Commissioner Denise Terry said she would like to know why Washington County was able to increase its average weekly wages by 4.3%. Lassiter said he’s not sure if that fact could be “ferreted out” but he would look into it.

Lassiter and others noted the substantially smaller workforces in Boyle’s neighboring counties could result in skewed statistics that make it difficult to compare to Boyle directly. In both Washington, which had the most wage growth, and Mercer, which had the highest average pay, the smaller workforces make it easier for a few high-earners to skew the average higher, they said. Mercer has less than half as many jobs as Boyle: Washington has only about a quarter of Boyle’s jobs.

Because Boyle County is the “supplier of services” for the region, the county has a lot more service and hospitality jobs than its neighbors — jobs that pay lower wages than jobs in industry, Lassiter said.

But while that lowers the county’s average weekly wage indicator, it also means Boyle has a more diverse economy, which is a good thing, said Jennifer Kirchner, the county’s tourism director.

EDP board members homed in on housing as one area where Boyle could make improvements that would benefit the economic indicators.

Boyle County’s population has grown steadily for years and is projected to continue increasing in coming years. But that growth hasn’t translated to enough housing development — particularly development of smaller, affordable living spaces, according to members of the EDP board.

“If it’s anything affordable and decent to live in, it goes so fast,” she said. “And the other thing is not everyone can pay $1,200 a month … that’s a big chunk.”

EDP members said there’s a chasm currently between what people want in housing — smaller, affordable spaces — and what developers want to build — huge houses with big yards, or “McMansions” as one member termed it.

It could be possible to incentivize housing developers to build more in Boyle County through lower or delayed fees, EDP members said.

Boyle Chamber of Commerce Director Jeff Jewel said Reno, Nevada, has had success in addressing its housing crisis by delaying fees developers used to have to pay up-front until housing developments actually sell.

Gibson said he would like the EDP’s committees to each take a look at the indicators in the report and determine what actions could be taken to help improve.

Lassiter noted he thinks Boyle is doing quite well already, but can continue to do better.

“Can we get a handclap to Boyle County for having seven of the positive data points out of 13? I know we’re hard on ourselves — we like to ‘Dan-alyze’ things. ‘Dan-alyze’ is my new word,” Lassiter said. “But this is positive. And we have work to do.”