SCOOP; House’s history was buried in its dirt 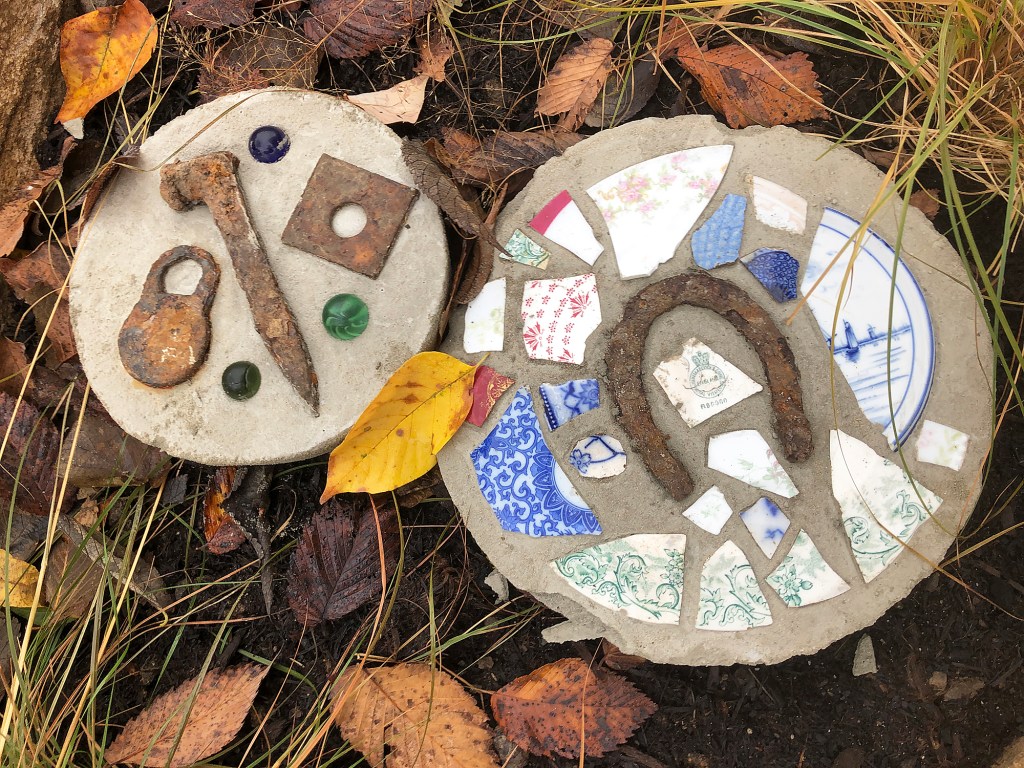 Eleven families have owned our house since it was built in 1911. We don’t know much about any of them, but recent excavations have given us some intriguing hints. Certainly, some of those people gardened here in the past.

The house was built by Sara and Logan Wood, who lived here for 10 years, selling the property in 1921 to Viola Eades Hines and her husband Walter. Four years later, the house was auctioned off to new owners. Was it the Woods or the Hines who planted the landscaping described in an auction advertisement from the June 30, 1925, Kentucky Advocate?

In rather flowery prose, the ad reads, “In the rear of the house there is a large garden with grape arbor, fruit, flowers and shrubbery, and a chicken house and yard. A feature not to be overlooked is the elaborate outlay of shrubbery and the splendid shade trees around the home.” Some of the trees are still here, but only the ghosts of others remain as shallow depressions in the lawn. The basement room lined with shelves must once have held jars of home-canned fruit and vegetables. There is no trace of the chicken house or grape arbor.

When we bought the house in 2015, it had been vacant for several years. We found almost three-quarters of an acre choked with weeds, volunteer saplings, overgrown shrubs, invasive vines, and masses of bush honeysuckle which had to be yanked out, chopped down, or pulled off walls and fences. There was very little worth saving, but that first spring a few hints of past flower beds emerged from the tangle.

Apparently, I wasn’t the first to grow spring wildflowers under the trees. When the weedy growth was cleared away, a few trilliums, mayapples, bluebells and lilies of the valley poked through the leaf litter. Daffodils popped up in rows or clumps in random spots throughout the yard, outlining long gone flower beds. The wide strappy leaves of Lycoris squamigera, commonly known as “naked ladies,” grew thickly along a sagging wire fence behind the garage. They disappeared in late spring, then shot up their pink flowers in July, tracing a fence that is no longer there.   An overgrown hedge was removed, revealing the blue flowers of wild larkspur hiding beneath the branches. With more sunlight, these return every spring in increasing numbers.

Recent excavations for a new water line and drainage pipes have unearthed more history and added a touch of mystery to our garden archaeology.  Shards of china in multiple patterns were dug up in at least six different areas, at depths of one inch to 24 inches. How on earth did they come to be scattered all over the back yard? There were also chunks of jugs and crocks, ceramic pots, and what looks like the thick lip of a chamber pot or wash bowl. Did people dig holes all over the yard to bury broken dishes? Was fill-dirt brought in from the county dump at some point?

I asked antique appraiser Jerry Sampson in Harrodsburg if he could tell me anything about my box of scraps. He didn’t recognize any china patterns earlier than the turn of the 20th century; a few are art deco. There are bits of milk glass from the 30s and a cobalt blue Vick’s Salve jar.  Jerry leans toward the buried trash idea, but I like my explanation better: Maybe a furious housewife threw dishes out the back door at her husband when she discovered the stash of empty whiskey bottles we found in the crawl space.

A friend spotted the first shard of china in a pile of dirt beside the new driveway. Soon, we were all sifting through dirt and finding more. Even the men doing the digging got into the act and left a pile of treasures on a tree stump every afternoon. They unearthed a small, rust encrusted horseshoe, a railroad spike, and the steel bracket of a car bumper, along with dozens more china pieces and odd bits of rusted metal. The railroad is nearby so that could explain the spike, but might there have been a pony in the backyard at some time, keeping company with the chickens? There must have been a little girl living here once, because I found the tiny arm of a doll extending from one of the dirt piles. I like to picture her riding a beloved pony down Maple Avenue 100 years ago, and to imagine the children whose marbles were lost and buried during long ago games.

Our finds aren’t valuable except that they help tell the story of the house. To preserve them, we made stepping stones for the garden by pressing the relics into wet cement poured into pie pans. Someday, when we are gone, those stepping stones will be yet another layer of history.