Lenn Yates retires after 19 years of service to Public Works 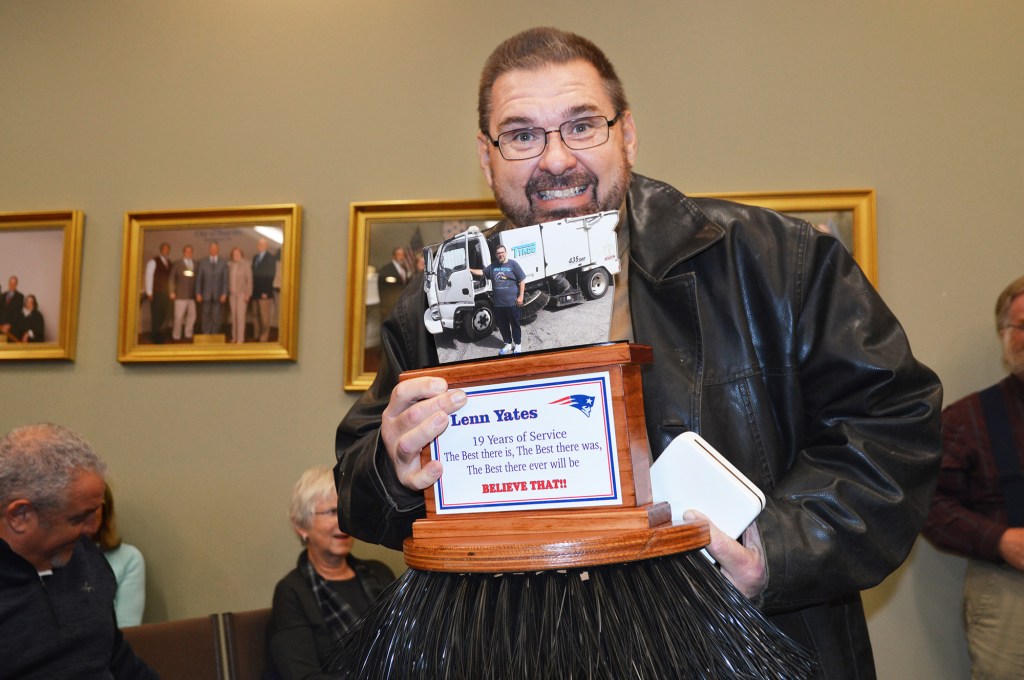 Len Yates is all smiles as he holds a plaque, personalized with part of a streetsweeper to memorialize his 19 years of service with the Public Works Department. Yates' retirement was honored during a Danville City Commission meeting. (Bobbie Curd photo)

Lenn Yates was recognized last week during the Danville City Commission meeting for his years of service to the city. He retired after 19 years with the Public Works Department.

Public Works Director Rick Henry said Yates has done everything imaginable in his almost two decades with the department.

“During those years, Lenn swept the streets, was the leaf truck driver, leaf crew leader, and when the snow hit during all that time, he had to plow and salt the roads,” Henry said. 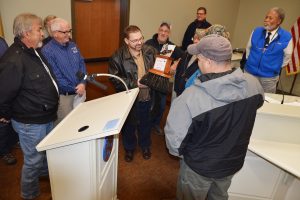 Len Yates, center, is surrounded by his coworkers from the Public Works Department during the Nov. 12 Danville City Commission as he’s honored with a special plaque from them for his 19 years of service to the city. (Bobbie Curd photo)

He said Yates has been an invaluable employee, filling in for any needs whenever and wherever they arise, and was the person in recent years who would open the fairgrounds when people rented it for events.

“He would give up his weekends for that,” Henry said.

Yates also worked in the cemeteries when the need was there, and Henry said that “it’s safe to say he’s pretty much done every job in Public Works from potholes to signs, to weeds to general duties of a sweeping truck driver.”

Henry said he and the rest of the crew will miss Yates’ presence in the community. “And all he’s done to keep Danville clean and safe.” He said it’s hard to find someone with Yates’ level of dedication and work ethic.

“His position may be filled, but he ain’t never gonna be replaced,” Henry said. Yates received a standing ovation from the city commission and crowd.

Yates said, “I want to thank the city for putting up with me for 19 years, for one. And I’ve been here a long time — and this is the best crew, the best management I’ve ever been under. I just thank everybody, and I’m going to miss working for the city.”

Mayor Mike Perros thanked Yates for his years of service and presented him with “a little momento, for all those silent services you’ve done over the years. We appreciate everything and hope you have a wonderful retirement. Learn to fish.”