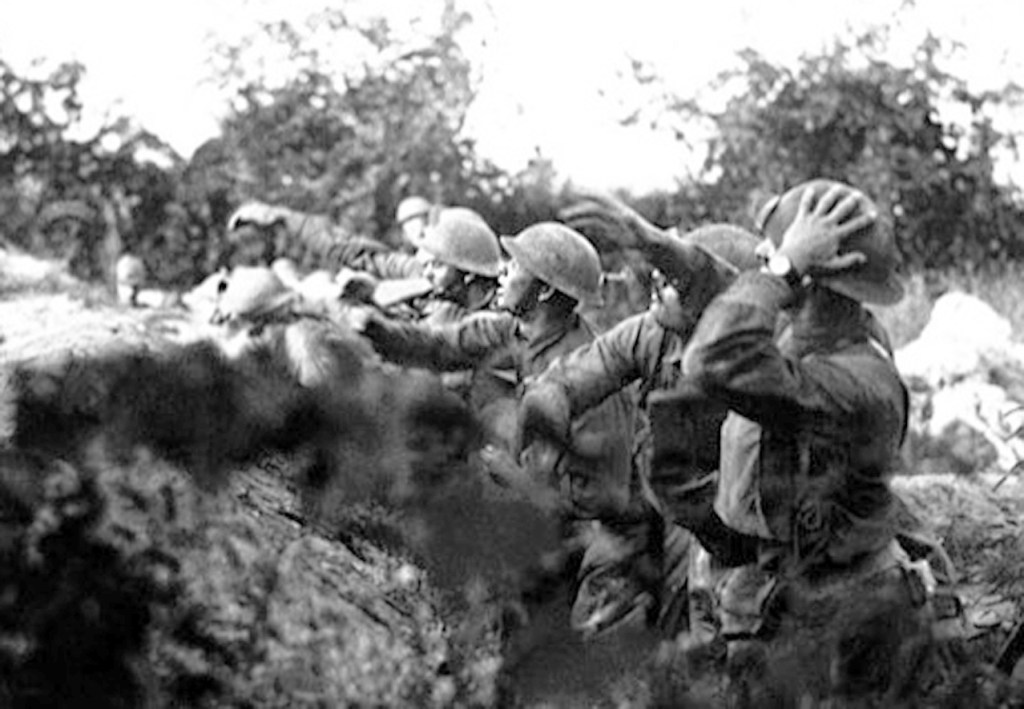 American soldiers hurling a shower of hand grenades into the trenches. (Photo from Wikipedia)

A Perryville soldier went through World War I in France without any injuries during active duty overseas.

Private First Class Hope Harmon was one of the fortunate ones in the bloody war that engulfed Europe from 1914 to Nov. 11, 1919, when an estimated 10 million military soldiers died and another 20 million were wounded.

After going through training with the Army, Harmon arrived in France in July 1918 and returned to the United States June 10, 1919.

He wrote letters regularly to his parents, George M. And Kizzie Pope Harmon of Perryville, while he was serving in France. Many of the letters were published in The Advocate-Messenger. He had a subscription to the local newspaper during his time in the military. He wrote that he liked keeping up with the news at home.

Harmon enlisted in the Army on May 10, 1918, in Akron, Ohio. He was transferred to a machine gun battalion in Camp Wadsworth, South Carolina, prior to his overseas assignment.

He was with the 16th Machine Gun Battalion, 6th Division, Headquarters Detachment, for 14 months in France. He operated a large machine gun truck.

Harmon wrote on March 3, 1919, of how tired of France he was getting and looking forward to returning to Perryville. He mentioned there was lots of snow for two weeks, and a break with sunshine was the first he’d seen in three months.

He also wrote in great detail of the history of places he traveled while driving the gun truck. He said he’d rather drive a truck so he could see more of the country than to stay on the ground where many of the soldiers lost their lives in trenches.

Before he was discharged in June 1919, Harmon took a trip to the French Riviera on the southeast coast of France that borders the Mediterranean Sea.

After a trip, he wrote: “Going to Nice was like taking a trip to the ‘Promised Land.’” He said Nice was the “prettiest city in France, in his estimation, even including Paris.”

He gave detailed history of the city built in 530 B.C.

It was the birthplace of Louis Braille, a French educator and inventor of a system of reading and writing for use of the blind. He mentioned Catherine Sequrane, a heroine of Nice, a washwoman who in on Aug. 15, 1543, helped save Nice in the thickets of fighting with the Turks.

He also said his unit was preparing for a big day as soon as “Black Jack” (General Pershing) was coming to look over the unit.

Harmon was in battles on the Argonne and Alsace fronts, and fortunately escaped being seriously wounded.

He never mentioned the exact location where he was when he wrote to his parents. They were written from “somewhere in France.”

“Every once and a while we can hear the big guns as they send the hot steel into the Huns. It gives one a most terrible ‘creepy’ feeling when the big bombs began bursting about.”

Harmon said he had “lived in horse stables, pigeon roosts, hay lofts, houses, mills, wine cellars, out of doors and in the ground. I have lived on everything from carrot soup and hard tack to beef steak and French toast.”

He added that, “not many of the boys are satisfied unless they are in the thickest of the fighting.”

Prior to entering service, he graduated at Elmwood Academy in Perryville.

Harmon was employed by Firestone Tire and Rubber Company in Akron, Ohio, when he enlisted in the Army.

He returned to his old job after his military service.

In 1926, Harmon accepted a job in Hazard. In October 1940, he was seriously injured in an explosion that destroyed a Masonic Lodge building there.

He was a former manager of Hazard Bowling Alleys and was in a power company office next door when the explosion occurred. He suffered head injuries.

He was awarded $10,000 plus the hospital bills for his injuries.

He also worked for Kentucky Utilities in Lebanon, and was a shipping clerk at the Tobacco Warehouse on Walnut Street in Danville.