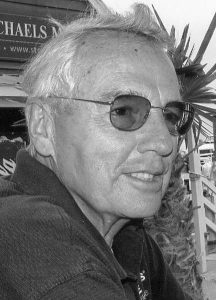 DeVillo H. “D.H.” Chamberlain Jr. passed away surrounded by his family, November 22, 2019 at the Pinebrook Memory Care. He was born in Salamanca, New York the son of DeVillo H. and Lillian E. (nee Herrington) Chamberlain Sr.

He is a graduate of Alfred University in New York and a Veteran of the U.S Air Force. He retired as an Administrator with IBM after 33 years of service. D.H. had moved over the years with his family to Connecticut, Maryland, Germany and Danville, Kentucky during his years with IBM. While in Danville, he volunteered at the Ephraim McDowell Regional Hospital.

On November 23, 1968 he married Judy (nee Booher), who survives along with their children; Samuel Hudson (Ashley) Chamberlain, Emily Jane (Tony) Moran, grandchildren; Grey, Winn and Hayes Chamberlain, Natalie and Anthony Moran, his brother; Douglas F. (Jean) Chamberlain and brother-in-law; Tom Ireland. Along with his parents, he was preceded in death by his sister; Carol E. Ireland.